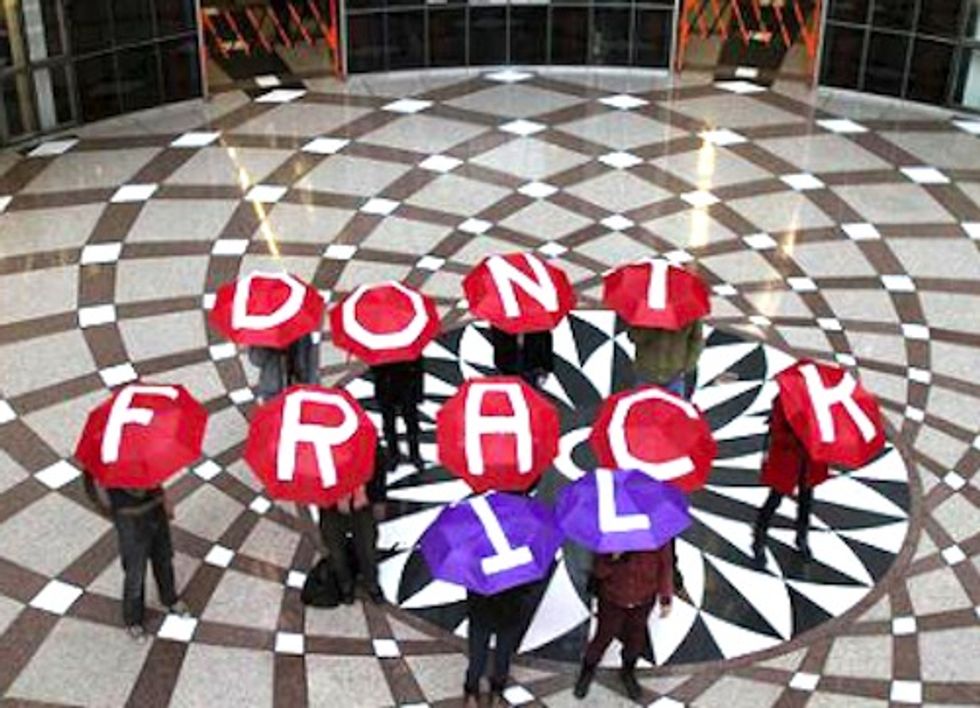 The Illinois Fracking Regulatory Bill (SB1715) has been praised as a "national model." It is a model all right—for the oil industry. And the exact opposite for citizens. Here's why.

Article XI of the Illinois State Constitution guarantees a healthful environment and empowers citizens to sue governmental or private parties that sully that right. There's one crucial caveat; the General Assembly can write regulations to supersede Article XI. This is what the fracking bill does; it helps protect oil and gas companies from lawsuits. In industry parlance, it gives them "regulatory certainty." Rather than protect citizens, regulatory certainty provides oil and gas companies with rights to "toxic trespass" on private property.

Would you let a neighbor come up to your property line and throw toxic garbage over your fence? You would not, and neither would anyone, anywhere.

Yet, this bill grants oil and gas companies exactly that right. They can pollute our air, poison our water, contaminate our soil, increase our body's burden of carcinogens and toxic chemicals, and destroy the value of our property. Yet, there are substantially reduced chances for compensatory damages if the Illinois constitutional guarantee to unfettered legal proceedings against environmental polluters is compromised by its General Assembly.

Oil and gas companies will be "following the law" when they trespass toxically. They can trespass physically, too, through the forced pooling clause in the Illinois Oil and Gas Act. When the majority of acreage in a designated hydrocarbon pool falls under an oil or gas lease, non-consenting owners are forced into the pool. Access road and well pads can be placed on their land and non-consenting landowners face arrest if they try to prevent physical trespass on their own land. In the Land of Lincoln, oil and gas companies can extirpate citizens' life, liberty and property rights in the U.S. Constitution.

As part of this industry-friendly package, the bill gives legal standing to cost-cutting but unsafe and unhealthful practices. Loopholes allow flaring of natural gas, use of frack pits to store toxic drill cuttings and larger pits to store "unexpected" amounts of toxic flowback water. Setbacks between well pads and homes, schools, churches and public water sources are grossly inadequate. Extreme chemicals, such as 2-butoxyethanol and dibromoacetonitrile, are allowed as frack fluids, and oil or gas brine will not be tested for radioactivity, toxicity or salt content.

The bill contains no worker safety provisions even though the fatality rate among oil and gas field workers is seven times higher than all industries. Workers receive zero protection under this AFL-CIO sponsored legislation.

The bill also sets a new standard for corporate giveaways. There is a "tax holiday" on the first two years of oil and gas production. Fracked wells deplete rapidly with at least half of the oil and gas produced in 24 months. As a result, the Illinois tax rate will be about half North Dakota's even though Illinois oil will be far more profitable: much lighter (premium to WTI benchmark), closer to the surface (reduced drilling costs) and much closer to refineries and big markets, along with existing pipelines (significantly reduced transportation costs). Masters of fiscal irresponsibility, Springfield politicians intend to solve the state's revenue problems with a multibillion dollar corporate welfare scheme.

Another example: well plugging and cleanup bonds are so low that companies will forfeit bonds with taxpayers footing the cleanup costs. The first out-of-state company publicizing its fracking Illinois plans will drill 156 wells. Since bonds are capped at $500,000 per company, and since plugging and cleanup costs for 156 wells will run about $4 million, guess what? The $500,000 will be left as a tightwad's tip on the way out of town. Taxpayers will foot the $4 million tab. Multiply this case by the number of wells drilled in Illinois and we have another multibillion dollar giveaway.

Finally, even if we had faintly decent regulations—rather than a loophole-ridden, oil company giveaway—regulatory agencies in Illinois have been disemboweled. Budget and staff reductions have cut so deep that the Illinois Environmental Protection Agency and the Department of Natural Resources resemble two Humpty Dumpties who have been thrown off a regulatory wall. It will be very difficult to put these agencies back together again—and definitely not in time to assemble enough trained and experienced staff to enforce regulations.

In sum, we get industry-friendly "regulations" that will not even be enforced and a pseudo-revenue bill that rewards wealthy oil companies and penalizes taxpayers while citizens lose a constitutional liberty.