Illegal Gold Mining Is Laying Waste to the Amazon 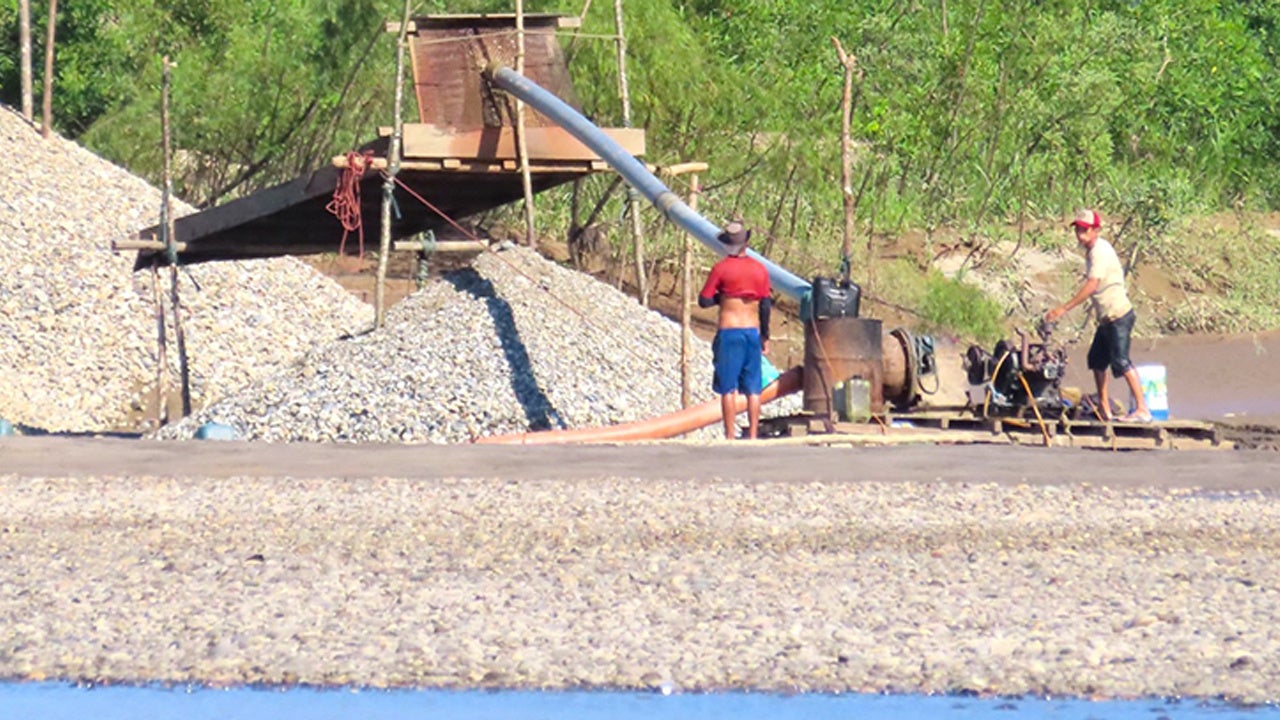 Miners at a riverbank site in the Amazon. Maria Rodriguez

Last summer, scientist Maria Rodriguez traveled to the Peruvian region of Madre de Dios, once the home of lush rainforests, meandering rivers and thriving wildlife. But her destination was anything but picturesque. She’d come to study several sites ravaged by illegal gold mining that had left a legacy of destruction and mercury poisoning. One area, in fact, resembled a lunar landscape, rather than a rainforest.

“No more trees, very dry, full of sand and rocks,” she said. “We couldn’t believe what our eyes were seeing. How did this happen?”

It happened because small-scale artisanal gold miners had been defying the law by working there, using toxic mercury to separate gold from the soil and river sediments. They extract the sediments from the river, pile them on the riverbanks, and then add mercury. Finally, they burn the mix, isolating the gold and releasing most of the mercury into the air. The remaining mercury stays in the soil, or ends up in the water, threatening wildlife, plants — and people.

At one point, Rodriguez and her colleagues traveled 45 minutes through the fog by riverboat, spotting small boats at the river banks, dredges that remove the sediments from the river.

“Miners were working under these black plastic roofs and some of them inside the river or at the riverbanks,” she recalled. “We even saw families with children. This was very frustrating because we knew they were polluting this beautiful environment, and also contaminating themselves. The mercury can affect the nervous system after exposure, especially in children.” 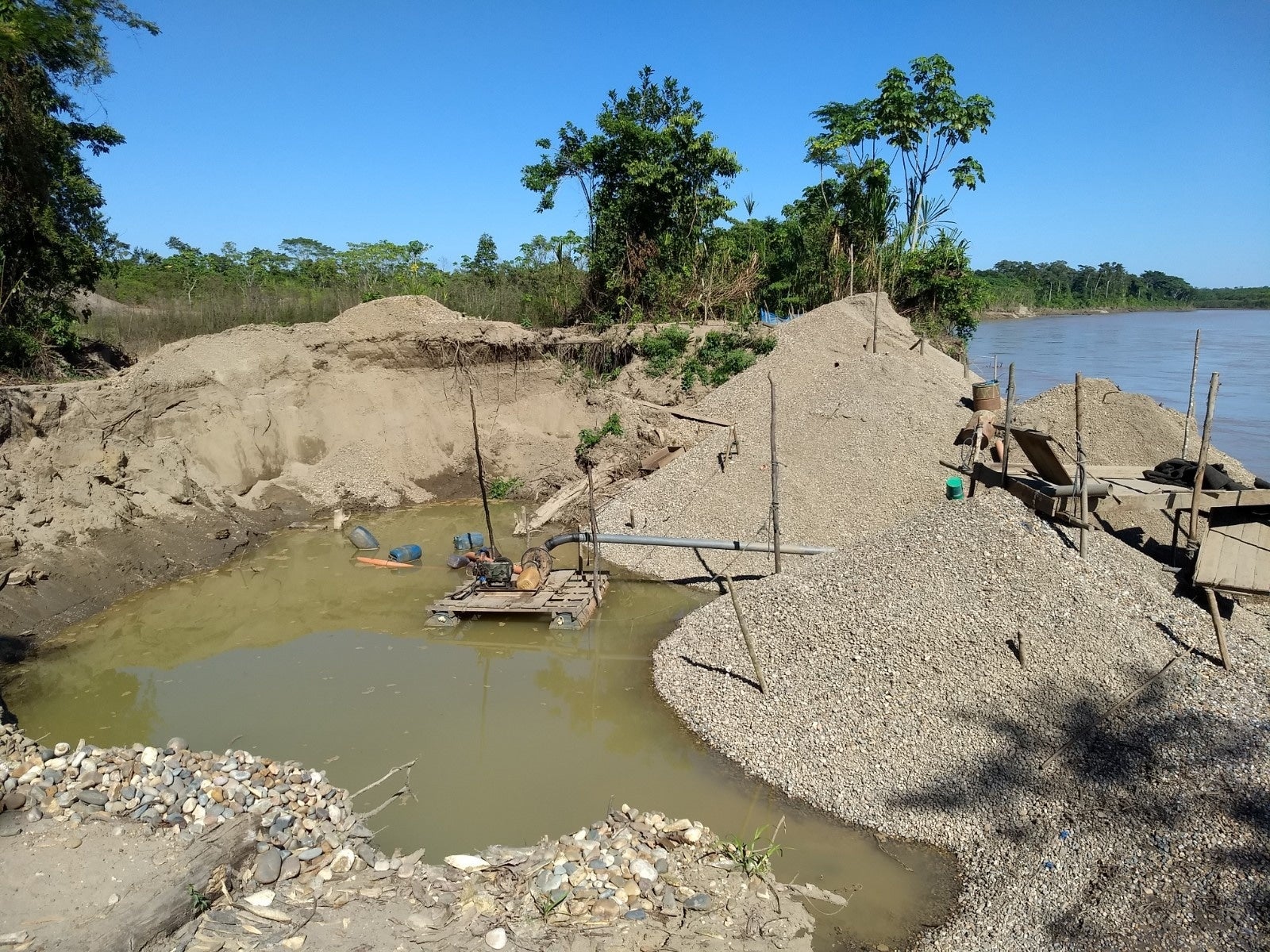 A mining site in the Amazon.

Rodriguez, a University of Maryland environmental engineering doctoral candidate in the A. James Clark School of Engineering, went to Peru with faculty mentors Natasha Andrade and Alba Torrents to assess the mercury damage there. The field trip was the start of a long-term project sponsored by the school and by CINCIA, the Center for Amazonian Scientific Innovation, which is working on the ground in Peru to reforest degraded areas in Peru. Rodriguez hopes the partnership will help restore the Peruvian region which, she says, already has lost nearly 250,000 acres to artisanal gold-mining in the last two decades.

While most recent attention has focused on wildfires that have been raging in the Amazon rainforest, which soak up carbon pollution and are often described as the “lungs” of our planet, other serious threats exist in the region, illegal gold mining and its use of mercury chief among them.

In Peru, the illegal mining is performed by individuals and small companies, many of the workers poor people from Andean regions, Rodriguez said. “But their activity is controlled by criminal organizations,” she said. “The artisanal activity has been performed in the Peruvian Amazon from the 1980’s but has increased in recent decades due to the high price of gold in the international markets.” 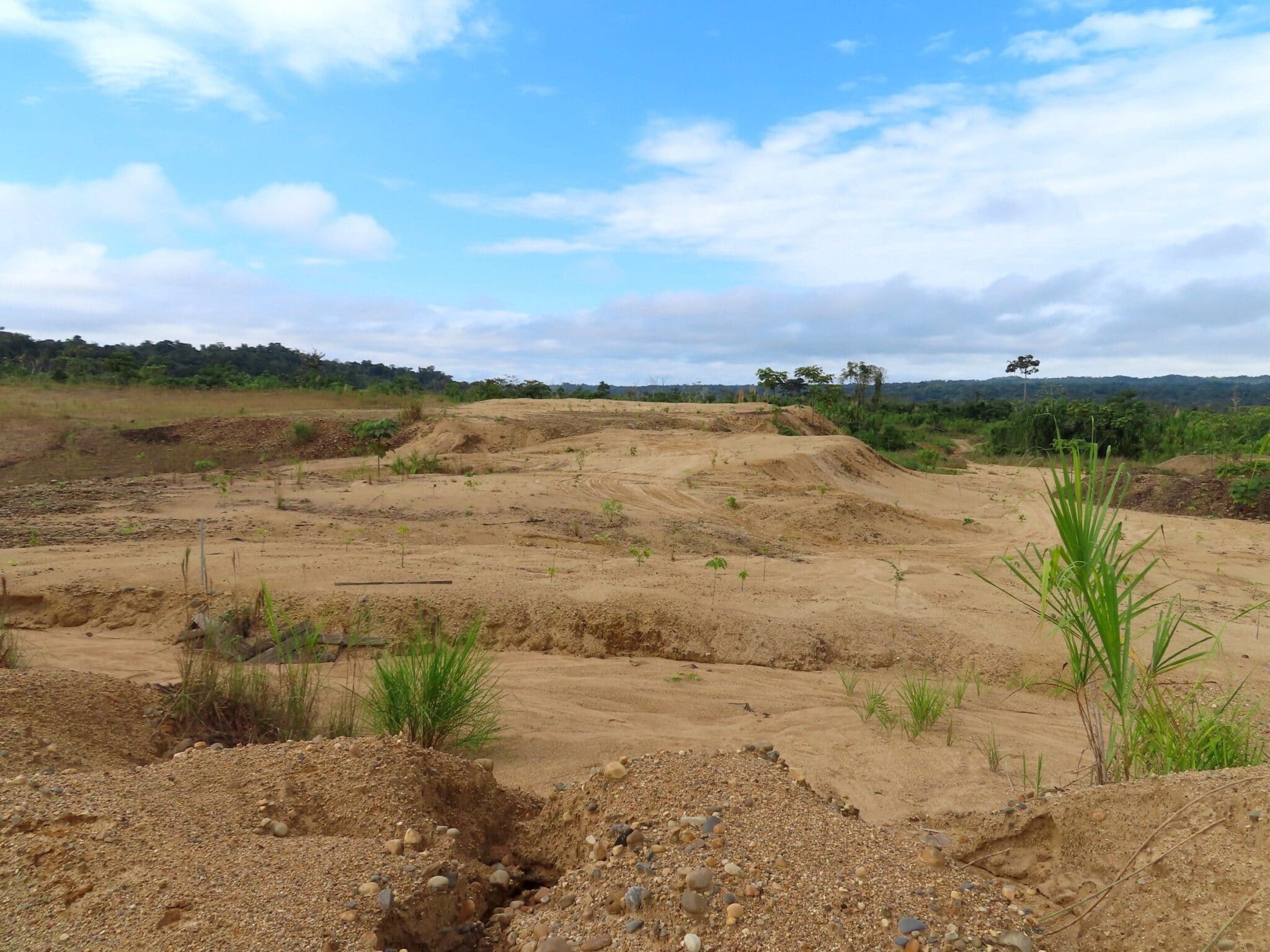 A former mining site in the Amazon rainforest.

Because mercury is destroying soils and foliage in the area, the scientists’ goal is to rejuvenate the forest by planting new species of vegetation that can withstand exposure to the poisonous element. Rodriguez hopes to determine the toxic threshold of mercury for the new-growth plants, species that include achiote, cocona and yucca, so that they can be planted safely and not pose a danger to people who later consume them.

Through tests and analyses, the researchers hope to figure out whether the new plants will grow in the contaminated soil, and how much soil needs to be cleared to eliminate the hazard. The findings also will help them predict whether new trees will grow there.

Latin America illegally extracts the world’s highest percentage of gold, according to the Global Initiative Against Transnational Organized Crime, with Venezuela, Colombia, Ecuador, Bolivia, and Peru topping the list.

“All the Amazonian countries in South America are suffering the impacts,” she said. “This is gold mining conducted by individual miners or small enterprises with limited capital investment and production. They don’t use safety protection or procedures to prevent environmental pollution.” A 2018 report cited more than 2,000 Amazon locations with unregulated mining, she said. 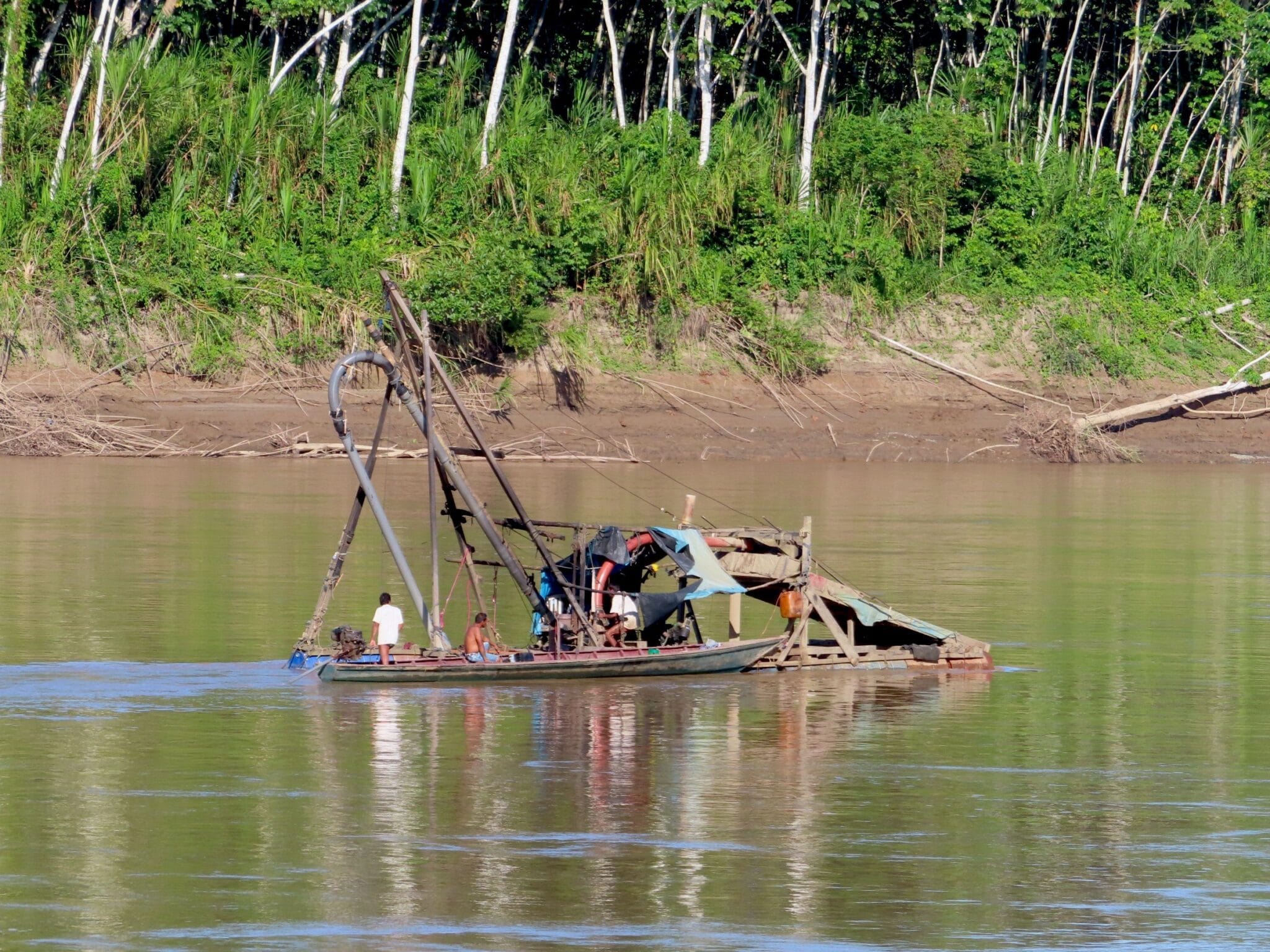 The definition of “illegal” differs by country, she added. “For example, in Peru, mining in national parks and their surrounding area is forbidden,” she said. “It’s also forbidden in rivers. In Brazil, artisanal mining in rivers is allowed. Some miners perform the activity in non-forbidden areas, with a permit from the government, but they use procedures that increase deforestation and contaminate soil, air and water with mercury.”

The Peruvian government has tried fighting it with its military, the most recent operation in February, she said. “They expelled the miners from the mining sites in the national parks and installed military bases there,” she explained. “But the maintenance of these bases is expensive. In similar operations in the past years, once the military left, the miners went back to the sites.”

Moreover, ending these activities is made more difficult because gold is bought and sold by a network of middlemen who provide false receipts, allowing export companies to buy the gold, which is refined abroad, she added. 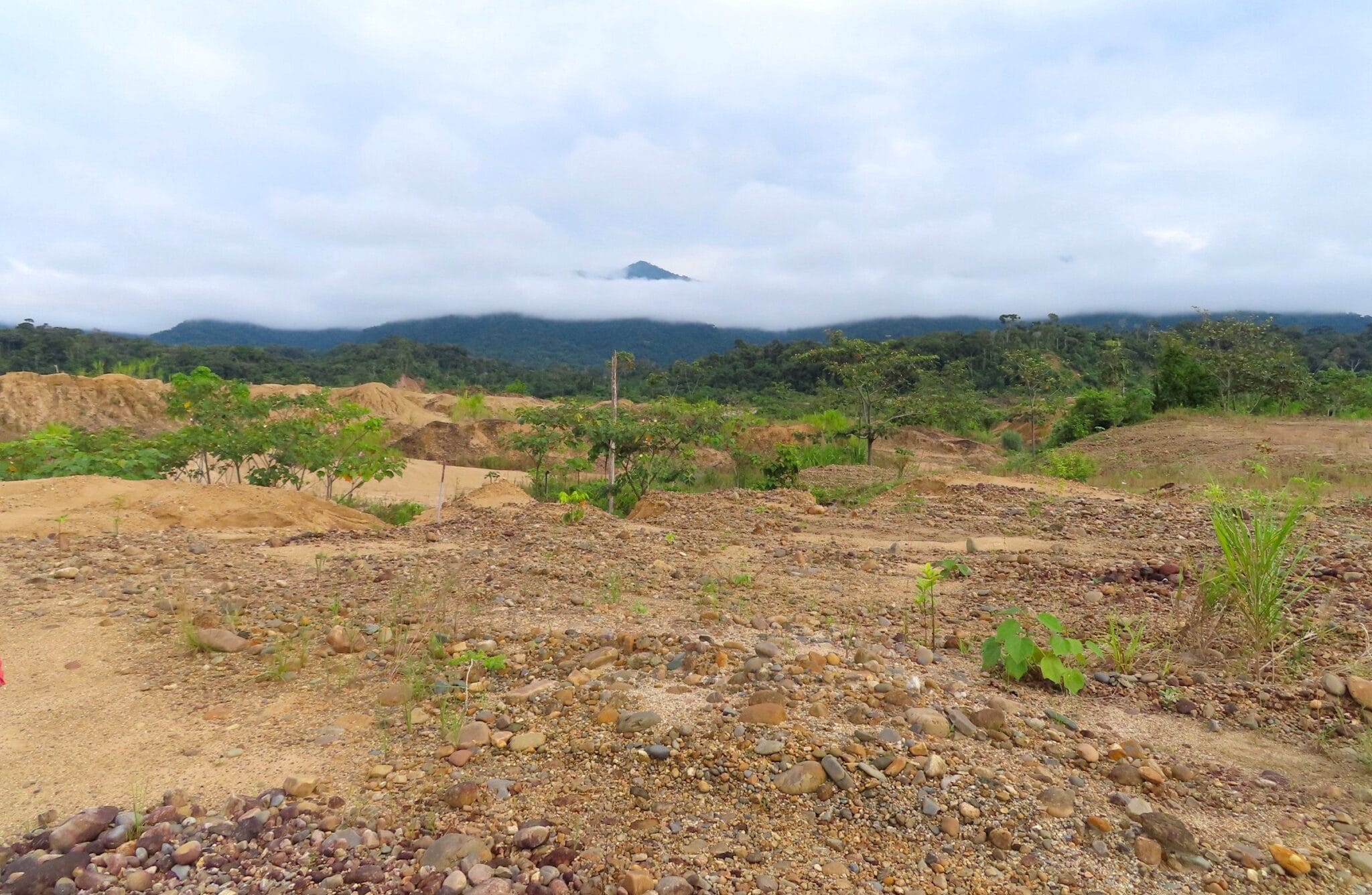 A former mining site in an indigenous territory in the Amazon.

The World Gold Council, the global trade organization for the pure gold mining industry, won’t comment on illegal mining. “However, we do work closely with our mining members on [environmental, social and governance] initiatives,” said Iya Davidson, a spokeswoman for the organization. The organization recently released Responsible Gold Mining Principles, a framework for consumers, investors and the supply chain, which, among other things, urges “respect for the environment.”

Miles Silman, a Wake Forest University biologist and CINCIA’s associate director of science, stressed the importance of good governance. “The profit from mining can be very large, so if a society decides to do it, they should make sure it is governed in a way where the benefits of the activity are worth the environmental destruction,” he said.

Rodriguez pointed out that the public likely knows little about controversial gold mining practices. “I think consumers are not aware of this problem because they are not even aware that they are consuming gold,” Rodriguez said. “Gold is not only use for jewelry or gold bars, but also for electronic devices, like cellphones. I’m sure that campaigns like the ones about blood diamonds could help to reduce the extent of illegal gold mining.”

While in Peru, Rodriguez visited the indigenous communities of San Jacinte and Kotsimba — home to the Shipibo and Harakbut people, respectively — where mining had left dead soil behind where nothing can grow. “The indigenous don’t want the miners to work in their territory but can’t do anything about it,” she said. “This is a common issue in this region.”

Many of the indigenous people asked about the possibility of soil treatments and other efforts that could help regenerate the forest, hoping to encourage ecotourism, she said.

“They wondered whether anyone will come to visit this ugly landscape,” she said. “They want their forest back. We felt very sad knowing that the forest will take hundreds of years to recover.”