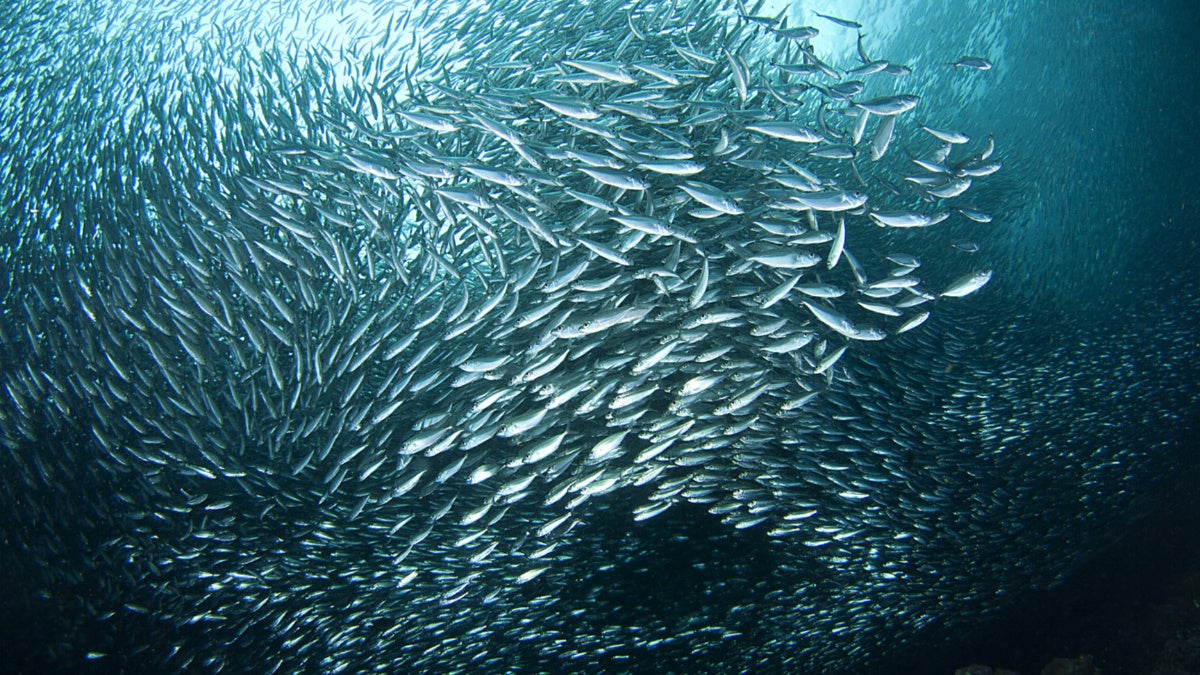 Recent records show that the size of wild-caught fish like sardines (pictured) is shrinking, implying they are being caught before they can grow big enough to properly reproduce. Davide_Lorpesti / Getty Images

The months of March to May are prime fishing season in the Philippines, ahead of the start of the monsoon in July, when sailing conditions become difficult. This year’s fishing period coincided with the lockdown imposed by the government in response to the COVID-19 pandemic, running from March 17 until May 15, and during which all land, sea and air travel was shut down.

Most small-scale fishers use underequipped boats with lights that aren’t powerful enough to be detected by VIIRS, observers say. And while VIIRS detection doesn’t automatically mean the presence of illegal fishing activity, the key factor is where the light sources occur: In the Philippines, commercial fishing is not permitted within 15 kilometers (9 miles) of the coast. These areas, defined as municipal waters, are restricted to small-scale fishing, in order to protect the coral reefs and marine habitats that thrive there. 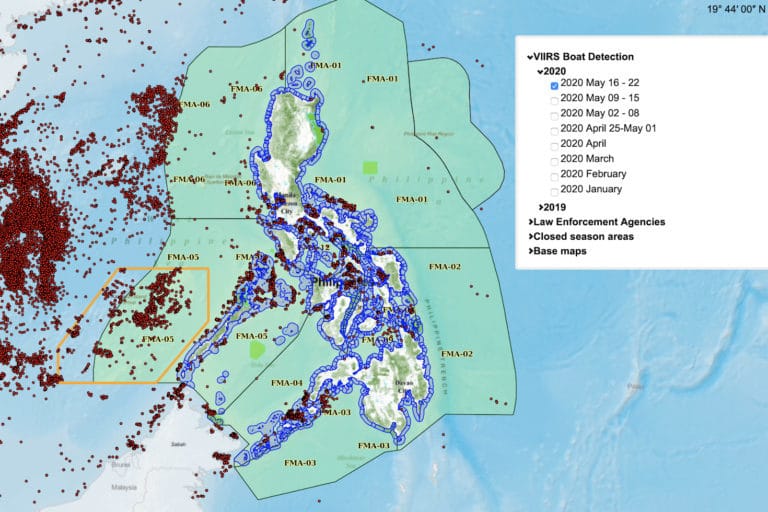 In February, before the lockdown began, VIIRS data showed 3,602 instances of apparent commercial fishing vessels, about 900 per week on average, within municipal waters. In March, when the lockdown was implemented, that number jumped to 5,950, or an average of 1,487 cases a week. In April, the figure was 4,487 for the month or 1,121 average weekly cases. The first week of May saw a decline in detections with 309 but figures jumped to 656 in the second week, May 9-15. When lockdown eased, a total of 1,666 detections were made within municipal waters in the week of May 16-22.

“The excuse of commercial fishing operators found plying on the municipal water is that they are hiding from high waves,” Gloria Estenzo Ramos, Oceana vice president and head of its Philippines office, told Mongabay. “In reality, they go fishing in bays and gulfs that are critical marine habitats that will destroy spawning grounds of young fishes.”

Oceana notes that “only small, artisanal fisherfolks on less than 3 gross tons of fishing vessels with passive fishing gears are allowed” to fish in municipal waters. These coastal territories are known as reproduction and spawning grounds for most fish species, Oceana said. Recent records show that the size of wild-caught fish like sardines is shrinking, implying they are being caught before they can grow big enough to properly reproduce.

The VIIRS data from May detected these vessels within three major protected areas: El Nido-Taytay Managed Natural Resource and Protected Area and Malampaya Sound Protected Landscape/Seascape, both in Palawan province; and Ticao Burias Pass Protected Seascape, a marine corridor that covers the provinces of Masbate, Camarines Sur, Albay and Sorsogon.

Masbate, which has 20 coastal municipalities, had the highest number of detections in its municipal waters in May, at 320. Palawan registered 249, while Quezon, which faces the Pacific, had 208.

These provinces are prolific sardine producers, together accounting for nearly 11,500 metric tons in 2018, or 13% of the Philippines’ total, according to the Fisheries Statistics of the Philippines, a government publication.

Oceana’s Ramos attributed the increase in apparent illegal fishing during the lockdown period to the fact that “some enforcement agencies were diverted to other COVID-19-related tasks.” As a result, illegal fishers took advantage of the lack of monitoring, she said. But some municipalities in the central Philippines joined forces to “enhance enforcement of fisheries and environmental laws in their municipal waters,” she added.

It’s unclear which of the numbers of detected vessels are local and those that are foreign since VIIRS only tracks strong lure lights, Oceana said. But the figures underscore the need for the government to implement its vessel monitoring rules, which will require commercial fishers to install tracking devices “that will indicate the identity and specs of the fishing vessel, aside from their real-time location.”

Commercial vessels fishing within municipal waters are a persistent problem in the Philippines’ fisheries sector, on which 1.9 million people depend for their livelihood; around 1 million are community fishers from underprivileged communities.

Three-quarters of the country’s waters are considered overfished, and wild-caught fish yields have decreased in recent years, prompting the government to impose closed fishing seasons, strengthen the aquaculture sector, and speed up the declaration of marine protected areas.

“We cannot allow illegal entry of commercial fishers in municipal waters,” said Gerard Montojo, the mayor of the island municipality of Romblon. “We need support in monitoring our municipal waters, and the tracking device installed on commercial fishing boats plying our territorial waters is a big help so we can run after them, seize their boats, and arrest them so they are held accountable by the law.”

But while legislation mandating the use of these tracking devices has been on the books since 2015, the implementation continues to be delayed, Ramos said. The commercial fishing sector is strongly opposed to the requirement, she said, “but this will not matter” if there’s political will to act.