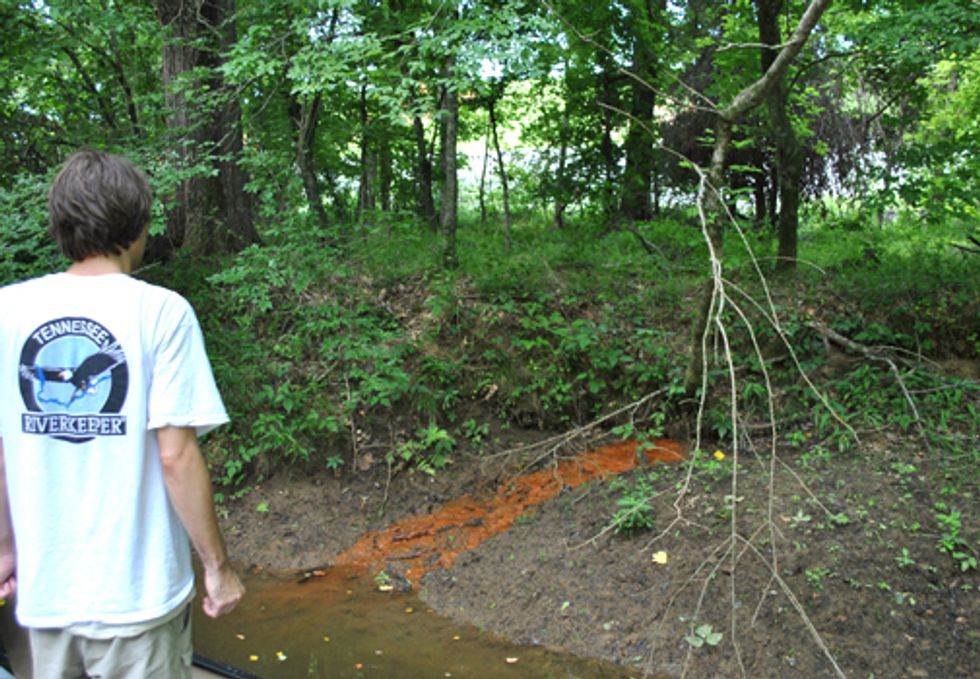 Citing ongoing coal waste contamination at Tennessee Valley Authority (TVA)’s Colbert Fossil Plant, conservation groups have charged that the facility is violating the Clean Water Act and that failure to address these violations will result in a lawsuit. As outlined in the 60-day notice of intent letter sent to TVA, violations at the coal-burning facility have caused significant amounts of pollutants to be discharged illegally into Cane Creek, a tributary of the Tennessee River, as well as groundwater in the area.

The letter—­submitted by the Southern Environmental Law Center on behalf of Tennessee Riverkeeper, Southern Alliance for Clean Energy, Shoals Environmental Alliance and Waterkeeper Alliance—details how seepage from the facility’s coal ash ponds contains arsenic, a toxic substance and known carcinogen, as well as selenium, lead, iron, cadmium and other pollutants.

“The Colbert Fossil Plant has had ongoing and persistent pollution problems from its coal ash ponds for decades,” said Keith Johnston, managing attorney for the Southern Environmental Law Center’s Birmingham office. “The only acceptable remedy is for TVA to stop this unpermitted discharge and to start storing all coal ash safely away from our waterways.”

Built in the 1950s, the aging Colbert plant is located on the Tennessee River and adjacent to one of its major tributaries, Cane Creek.

“Toxic metals in the seepage water negatively affects the health of the river and puts at risk the many fishermen, boaters, skiers and swimmers who use this area regularly, as well as those who depend on the river for their municipal drinking water supply,” said David Whiteside of the Tennessee Riverkeeper. “Citizens depend on a clean and healthy Tennessee River for drinking water, swimming, fishing and other recreational uses, as well as bringing in millions of dollars in recreational and tourism income throughout the Valley.”

The 60-day notice outlines ongoing surface and groundwater contamination from the Colbert Fossil Plant. TVA’s own documentation shows that its coal ash ponds and other waste impoundments have polluted the groundwater for almost thirty years, but despite TVA’s awareness of the contamination, it has continued to dispose and store the plant’s coal waste irresponsibly. In addition, Tennessee Riverkeeper has documented additional toxic discharges from the site flowing directly into Cane Creek.

The facility’s contamination originates from two coal ash ponds covering 127 acres total. The impoundments are unlined, meaning there is no barrier to prevent coal ash contaminants from reaching groundwater. And, indeed, documentation has confirmed seepage of arsenic and other pollutants through the sides and the bottoms of the ash ponds. At one location, sampling has shown arsenic levels that were more than fifty times Alabama’s Maximum Contaminant Level for arsenic.

Donna Lisenby, the coal campaign coordinator for Waterkeeper Alliance said, “Since the TVA Kingston Fossil Plant coal ash spill in 2008, I have been working with Waterkeepers across the United States to document water pollution from coal-fired power plants. Two things make Colbert unique and distinguish it from hundreds of other coal ash ponds around the country. The first is that water tests results from Colbert’s unpermitted discharges have some of the highest levels of arsenic, lead, selenium, cadmium, chromium, boron, iron, manganese and molybdenum that we have seen anywhere in the southeast. The second is that TVA stored more than a million tons of coal waste in unlined ponds that were constructed on top of and adjacent to sink holes.”

“The contamination at Colbert is indicative of a broader problem across the Southeast, namely that utility regulators need to pay more attention to the problems posed and caused by these ill-maintained coal ash ponds,” said Ulla Reeves, regional program director of the Southern Alliance for Clean Energy. “With TVA’s history of questionable coal ash management and in light of the Kingston coal ash disaster of 2008, we hope this notice will serve as another wake up call that TVA needs to clean up its act.”