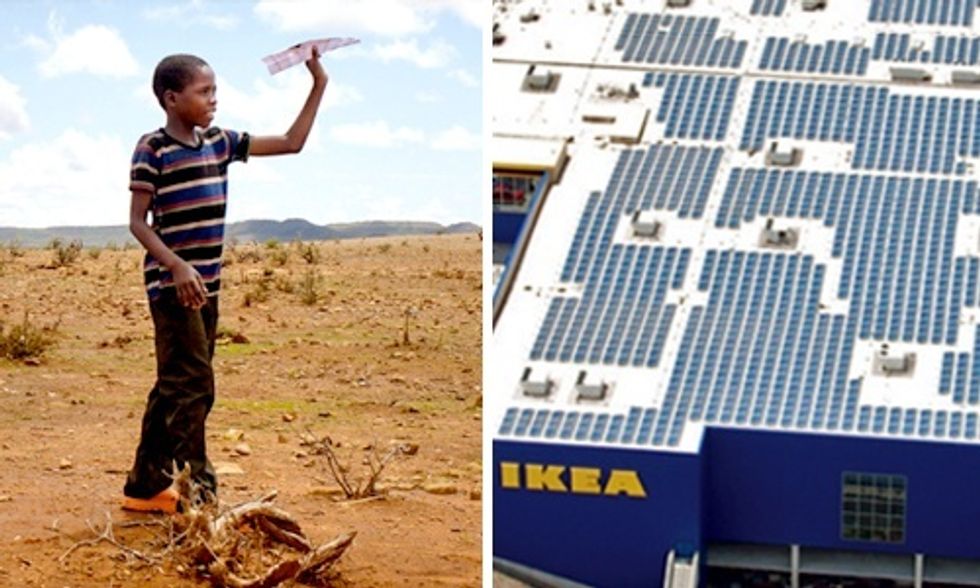 IKEA, a company known for its ready-to-assemble furniture, is also a leader in renewable energy and climate mitigation. The Swedish furniture giant today announced a massive $1.13 billion commitment to address the effects of global warming in developing countries.

IKEA is pledging $1.13 billion on renewable energy solutions, such as wind and solar, to support families and communities most impacted by climate change.

According to an announcement, the generous measure was made to accelerate the transition to a low-carbon economy and to support the communities most at risk. The massive $1.13 billion total is made up of combined pledges from the IKEA Group and the IKEA Foundation, the philanthropic arm of the group. The majority of the commitment (around $560 million) will be invested in wind energy and around $110 million is expected to be invested in solar up to 2020.

“Climate change is one of the world’s biggest challenges and we need bold commitments and action to find a solution," said Peter Agnefjäll, IKEA Group president and CEO. "That’s why we are going all in to transform our business, to ensure that it is fit for the future and we can have a positive impact. This includes going 100 percent for renewable energy, by investing in wind and solar, and converting all our lighting products to affordable LED bulbs, helping many millions of households to live a more sustainable life at home.”

IKEA said it's on track to become energy independent, producing as much renewable energy as it consumes in its buildings. The company, which has invested around $1.7 billion in wind and solar since 2009, has also committed to owning and operating 314 offsite wind turbines and has installed 700,000 solar panels on its buildings.

Agnefjall told Reuters that the newest investment would "absolutely not" increase prices at the stores, adding that the investments will be "good for customers, good for the climate and good for IKEA too."

“We’re working toward a world where children living in poverty have more opportunities to create a better future for themselves and their families. Tackling climate change is critical to achieving this goal,” said Per Heggenes, CEO of the IKEA Foundation.

The IKEA commitment coincides with the Bonn Climate Change Conference, where world governments are preparing on a global climate agreement to be negotiated at the United Nations Conference on Climate Change (COP21) meeting in Paris this December.

IKEA's announcement makes it clear that the private sector is not waiting for world governments to act. On the contrary, companies like IKEA are committing now to real climate action, including industry-changing investments in solar and wind projects.

Hopefully, IKEA's investment in the health of our planet and in at-risk communities will encourage other companies and governments to do the same.