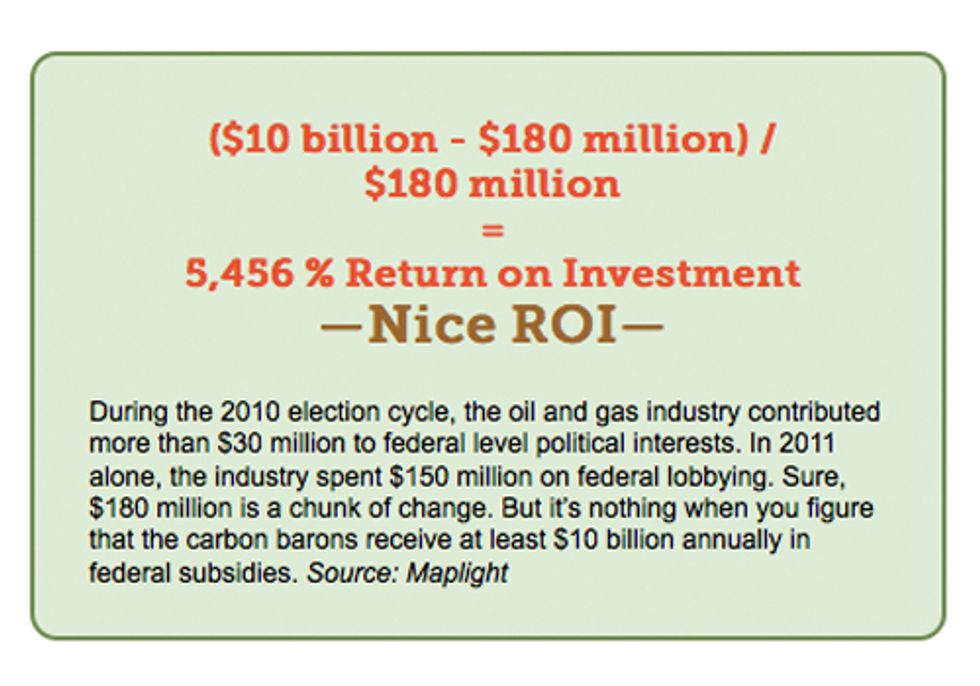 America is under assault from a deadly, insidious and persistent pollutant. This pernicious contaminant threatens our health, safety and way of life. Its noxious emissions are rising fast, fouling every corner of our nation. It attacks our brains, distorting rational thinking and decision-making. It poisons the air of civilized discourse. It has made it all but impossible to achieve meaningful progress on climate change, chemical policy, and a long list of other environmental issues confronting our country and our planet.

I’m talking, of course, about the influence of money on American democracy.

The shocking sums that big businesses and wealthy individuals spend to sway elections and manipulate legislation is the chief obstacle between the dirty, unhealthy, unjust mess our country is in and the clean, safe and fair society the vast majority of us want.

Eighty-five percent? When Martin Luther King Jr. marched on Washington in 1963, only 23 percent of the country supported the march. Yet within a few years the movement he helped build changed our society in dramatic ways. So why, with all this popular support, does the environmental movement find itself fighting the same battles over and over again?

It’s no big secret: Follow the money. If we had a Toxics Release Inventory for the pollution spewed forth by corporations’ political spending, it would, among other things, reveal:

In 2009, as Congress debated a climate change bill that would have begun to slow carbon emissions, the oil and gas industry’s lobbyists spent $175 million to defeat it. ExxonMobil alone spent $27.4 million. More than 770 companies and interest groups hired 2,340 lobbyists to work on the issue, with an overwhelming majority of those lobbyists working to defeat it. That’s four lobbyists for each member of Congress.

In the 2010 election, corporations and the super rich funneled $300 million to so-called “independent” political action committees to run attack ads and advance corporate interests. In this year’s presidential election, these so-called “super-PACs” are projected to spend more than $1 billion.

Just as the latest Hollywood blockbusters shatter previous box-office records, corporate spending in the future could make even those numbers look like chump change. The reason is the Supreme Court’s awful Citizens United v. FEC decision, which opened the floodgates to unlimited spending to influence American elections.

Hope, however distant, is visible on the horizon. People across the country are coming together, exercising their citizen muscles to get our democracy back to work for people and the planet. Almost 80 percent of Americans say the Citizens United decision should be overturned. Legislators in six states have passed resolutions or signed letters calling for a constitutional amendment to do just that.

Adopting a constitutional amendment is a huge challenge, but one that everyone who cares about the environment should be committed to. As Jim Hightower says, the water won’t clear up until we get the hogs out of the creek. Or put another way: It’s time to move the swine out of our political system.

Annie Leonard is the co-director of The Story of Stuff Project and the host of eight online movies, including The Story of Citizens United v. FEC.