If Senator Bennet Isn't a Climate Denier, Then Why Is He Acting Like One? 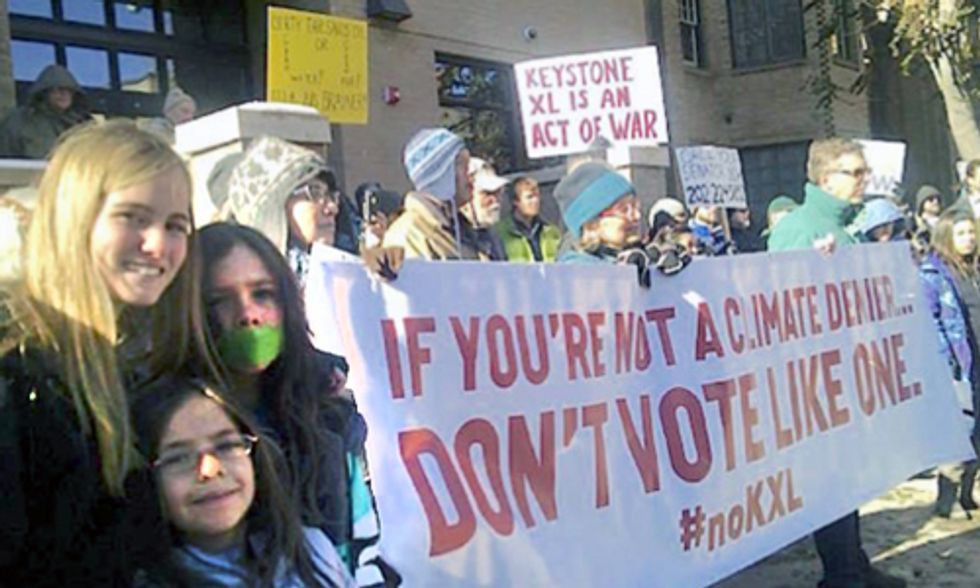 As a response to all of that, here’s the statement that Bennet’s spokesperson released to the public and media:

He would prefer that instead of focusing our political debate on a narrow issue that we develop a broad and comprehensive energy strategy to reduce carbon pollution and support renewable energy. He believes we should take aggressive action to curb climate change and support the President’s Climate Action Plan.

Activists flooded Sen. Bennet's office phone, his office in Denver, and his office in Washington, DC before, during and after the Keystone XL vote. Photo credit: 350.org

A few days later, Senator Bennet was interviewed by the Denver Post about his positions on energy and fracking for oil and gas in Colorado. The Denver Post reported that Bennet said he supported an "'all of the above' approach to energy" that included "guarding Colorado’s booming liquid natural gas industry" to "make it easier for energy companies to export liquefied natural gas" and would be "pushing legislation to reduce taxes on liquefied natural gas."

So …, here we have a prominent U.S. Senator—who, in fact, was the Chairman of the Democratic Senate Campaign Committee for the 2014 election—who says we should take “aggressive action to curb climate change,” but yet he supports mining all of the Alberta tar sands via his Keystone XL vote, and supports mining and fracking for all of the oil and gas in Colorado and beyond.

In 2016, Senator Bennet is up for re-election in Colorado. Climate change activists like me are extremely concerned with Senator Bennet’s position on climate change policy. As we try to wrap our heads around Bennet’s votes and statements, we have these questions:

We Colorado Democrats and climate change activists eagerly look forward to Senator Bennet’s future statements and positions on these issues. Of course, we will continue to respectfully work with Senator Bennet on these and other environmental issues in Colorado over the next two years. But in the meantime, we will "sleep with one eye open."