Idle No More—Think Occupy, But With Deep Deep Roots 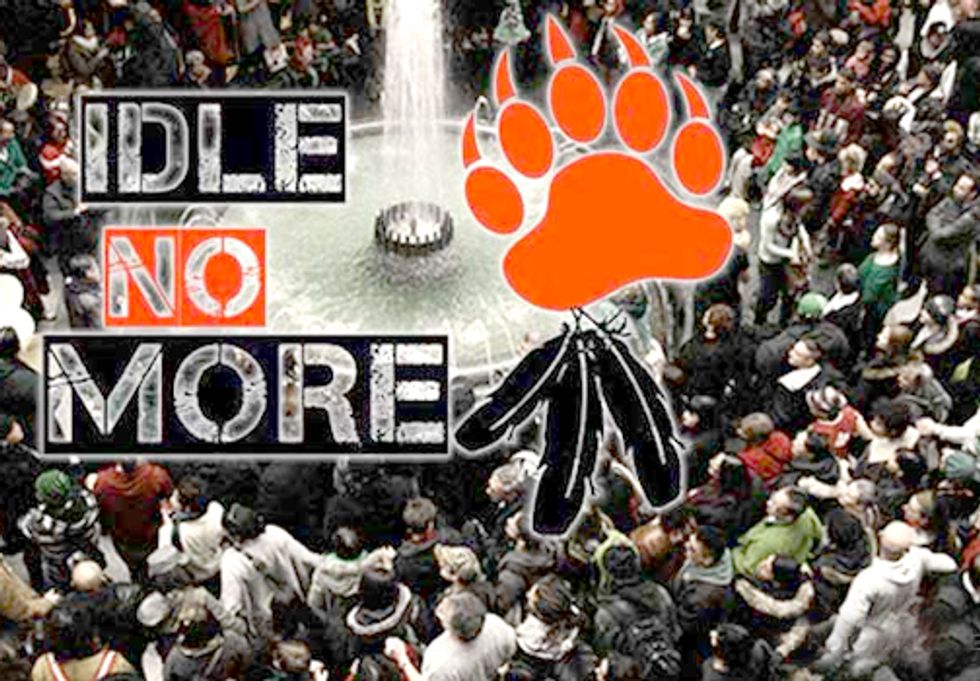 I don't claim to know exactly what's going on with Idle No More, the surging movement of indigenous activists that started late last year in Canada and is now spreading across the continent—much of the action, from hunger strikes to road and rail blockades, is in scattered and remote places, and even as people around the world plan for solidarity actions on Friday, the press has done a poor job of bringing it into focus.

But I sense that it's every bit as important as the Occupy movement that transfixed the world a year ago; it feels like it wells up from the same kind of long-postponed and deeply felt passion that powered the Arab Spring. And I know firsthand that many of its organizers are among the most committed and skilled activists I've ever come across.

In fact, if Occupy's weakness was that it lacked roots (it had to take over public places, after all, which proved hard to hold on to), this new movement's great strength is that its roots go back farther than history. More than any other people on this continent, Native Americans know what exploitation and colonization are all about, and so it's natural that at a moment of great need they're leading the resistance to the most profound corporatization we've ever seen. I mean, we've just come off the hottest year ever in America, the year when we broke the Arctic ice cap; the ocean is 30 percent more acidic than it was when I was born.

Thanks to the same fossil fuel industry that's ripping apart aboriginal lands, we're at the very end of our rope as a species; it's time, finally, to listen to the people we've spent the last five centuries shunting to one side.

A tradition of defending the land

Eighteen months ago, when we at the climate campaign 350.org started organizing against the Keystone XL pipeline, the very first allies we came across were from the Indigenous Environmental Network—people like Tom Goldtooth and Clayton Thomas-Muller. They'd been working for years to alert people to the scale of the devastation in Alberta's tar sands belt, where native lands had been wrecked and poisoned by the immense scale of the push to mine "the dirtiest energy on earth." And they quickly introduced me to many more—heroes like Melina Laboucan-Massimo, a member of the Cree Nation who was traveling the world explaining exactly what was going on.

When, in late summer 2011, we held what turned into the biggest civil disobedience action in 30 years in the U.S., the most overrepresented group were indigenous North Americans—in percentage terms they outnumbered even the hardy band of Guilty Liberals like me. And what organizers! Heather Milton-Lightning, night after night training new waves of arrestees; Gitz Crazyboy of Fort Chipewyan, Alberta, absolutely on fire as he described the land he could no longer hunt and fish.

In the year since, the highlights of incessant campaigning have been visits to Canada, always to see native leaders in firm command of the fight—Dene National Chief Bill Erasmus in Yellowknife, or Chief Reuben George along the coast of British Columbia. Young and powerful voices like Caleb Behn, from the province's interior; old and steady leaders in one nation after another. I've never met Chief Theresa Spence, the Attawapiskat leader whose hunger strike has been the galvanizing center of Idle No More, but I have no doubt she's cut of the same cloth.

The stakes couldn't be higher, for Canada and for the world. Much of this uprising began when Canada's Prime Minister Stephen Harper rammed through Parliament Bill C-45, an omnibus bill gutting environmental reviews and protections. He had no choice but to do so if he wanted to keep developing Canada's tar sands, because there's no way to mine and pipe that sludgy crude without fouling lakes and rivers. (Indeed, a study released a few days ago made clear that carcinogens had now found their way into myriad surrounding lakes). And so, among other things, the omnibus bill simply declared that almost every river, stream and lake in the country was now exempt from federal environmental oversight.

Canada's environmental community protested in all the normal ways—but they had no more luck than, say, America's anti-war community in the run up to Iraq. There's trillions of dollars of oil locked up in Alberta's tarsands, and Harper's fossil-fuel backers won't be denied.

But there's a stumbling block they hadn't counted on, and that was the resurgent power of the aboriginal nations. Some Canadian tribes have signed treaties with the British Crown, and others haven't, but none have ceded their lands and all feel their inherent rights are endangered by Harper's power grab. They are, legally and morally, all that stand in the way of Canada's total exploitation of its vast energy and mineral resources, including the tar sands, the world's second largest pool of carbon. NASA's James Hansen has explained that burning that bitumen on top of everything else we're combusting will mean it's "game over for the climate." Which means, in turn, that Canada's First Nations are in some sense standing guard over the planet.

And, luckily, the sentiment is spreading south. Tribal nations in the U.S., though sometimes with less legal power than their Canadian brethren, are equally effective organizers—later this month, for instance, an international gathering of indigenous peoples and a wide-ranging list of allies on the Yankton Sioux territory in South Dakota may help galvanize continued opposition to the Keystone XL pipeline, which would help wreck those tar sands by carrying the oil south (often across reservations) to the Gulf of Mexico. American leaders like Winona LaDuke of the White Earth Indian Reservation have joined in the fight with a vengeance, drawing the connections between local exploitation and global climate change.

Corporations and governments have often discounted the power of native communities—because they were poor and scattered in distant places, they could be ignored or bought off. But in fact their lands contain much of the continent's hydrocarbon wealth—and, happily, much of its wind, solar and geo-thermal resources, as well. The choices that Native people make over the next few years will be crucial to the planet's future—and Idle No More is an awfully good sign that the people who have spent the longest in this place are now rising artfully and forcefully to its defense.