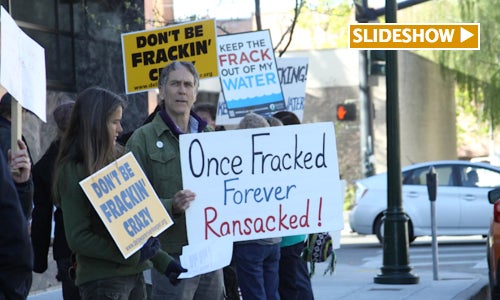 Yesterday, prior to the Idaho Oil and Gas Commission auctioning of mineral rights for 17,700 acres of state endowment land, a small but lively group of residents protested the sale, which saw every tract awarded to Alta Mesa Idaho for $1,148,435 in “bonus bids.”

For an hour they sang the climate activism song “Do it Now,” and carried signs calling for more public input on how state lands are put up for auction without warning about the health and environmental consequences that come with development.

The protest was organized by Wild Idaho Rising Tide and Idaho Residents Against Gas Extraction (IRAGE). The Muse Project was also represented, and though the protesters may not have belonged to any one group they were all linked by a common concern over Idaho’s future and what hazards oil and gas extraction activities may bring.

“I just don’t think with oil and gas, to continue developing and extracting it with all the knowledge we have, it just doesn’t make any sense to continue to push that,” said Boise resident Lisa Stravers.

Chris Wylie, of Boise, protested the sale in concern over what gas drilling will do to water supplies.

“So far, the state doesn’t have much development but I’m very concerned about fracking in the future, and what injecting chemicals at very pressures into the Earth and through aquifers will do,” Wylie said. “Plus, when something goes wrong the clean up costs are pushed to the taxpayer. What would happen if energy developers had to pay for the true costs?”

During a quick break from singing, Wanda Jennings, donning rabbit ears in fashion for the upcoming Easter holiday, said she wasn’t too concerned with the small number of protesters who came out yesterday morning. “They know we are here and we’re keeping an eye on what they are doing,” said Jennings. “We are not unnoticed and that’s important.”

Boise resident Johnny Walker hopes state officials notice residents’ concerns and do more to protect the environment and property that may be impacted by industry. “Leasing public lands to the highest bidder, it’s not safe for our future and it’s not right,” Walker said. “This state was once concerned about conservation.”

Walker joined the protest with his two youngest children in tow, lamenting the possibility “they may not get to go outside,” in the county he grew up in.

He has reason to be concerned. A recent study study from the National Institute of Environmental Health Sciences and Environmental Health Perspectives’ found that within a 10-mile radius surrounding fracking sites pregnant women’s’ unborn children are more susceptible to congenital heart defects.

“It doesn’t just affect my nostalgia, it impacts our future,” Walker continued. “I don’t live in any delusional world where they aren’t going to drill. That said, I hope the state puts in place rules for the testing of water wells and state waters around drill sites so that—God forbid—if and when casings go we have recourse in the courts.”

Protesters were allowed into the auction, where they stood quietly with their signs and observed the day’s business. The sale saw parcels as small as three acres to 640 acres sold for as little as $11 to more than $500 acre.

The state’s first lands and minerals auction was in January, with 8,714 acres leased for oil and gas drilling. About half of those acres lie alongside the Boise, Payette and Snake river beds.

After Thursday’s auction, Idaho now has nearly 98,000 state acres leased for oil and gas development. Idaho Department of Lands reported in a press release the average bid was $76 per acre. The highest lease, of 141 sold for $505 an acre.

Mining and Fracking Public Lands Creates 4.5 More Carbon Than They Can Absorb