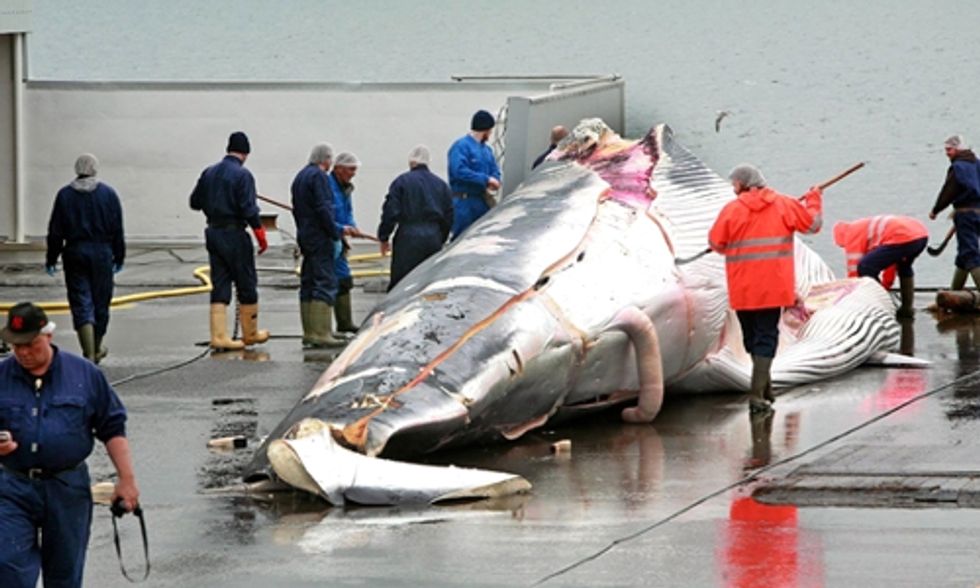 Secretary of Interior Sally Jewell issued a formal declaration that Iceland is undermining the effectiveness of the Convention on International Trade in Endangered Species of Wild Fauna and Flora’s (CITES) and its prohibition on international commercial trade in whale products.

Conservation and animal welfare groups commend Jewell’s declaration and urge President Obama to act with urgency. On the Dec. 12, 2013, Iceland’s Ministry of Fisheries and Agriculture announced that it would allow commercial whaling to continue for at least the next five years. As many as 154 endangered fin whales and 229 minke whales could be killed each year under Iceland’s self-allocated quotas which are set to run from 2014 to 2018.

A fin whale being captured and harpooned by an Icelandic ship in June 2013. Photo credit: Greenpeace

“Killing endangered fin whales is not only brutal, it’s short-sighted," said Taryn Kiekow Heimer, senior policy analyst of the Natural Resources Defense Council. “Iceland should not be allowed to ignore the fact that, regardless of some temporary financial reward, this practice is simply unsustainable and cruel. The U.S. must lead global action by imposing strong economic sanctions to end this senseless and illegal practice once and for all.”

Today’s decision starts a 60-day period for President Obama to decide whether or not to impose economic measures, including trade sanctions, against Iceland under conservation legislation known as the “Pelly Amendment.” Iceland killed 35 minke whales and 134 fin whales—massive animals second only to blue whales in size—during the 2013 whaling season.

“Whaling has no place in the modern world," said Kitty Block, vice president of Humane Society International. “It is inhumane to kill these gentle giants of the ocean and to trade in their parts. The U.S. needs to lead efforts to stop this unnecessary and brutal trade.”

In a Dec. 2010 petition to the Secretaries of Commerce and Interior calling for action against Iceland, 19 conservation and animal welfare groups identified specific Icelandic companies as potential targets for trade sanctions, including major seafood industry players directly tied to Iceland’s whaling company, Hvalur.

Icelandic whalers have killed more than 700 whales, including hundreds of endangered fin whales, since the country allowed whale hunts to resume in 2003, exploiting controversial loopholes to evade the whaling ban. On Dec. 12, 2013, Iceland’s Minister of Fisheries and Agriculture announced a five-year block quota for fin and minke whales.

“Iceland’s decision to resume its fin whale hunt, and ultimately international trade in the meat of this endangered species, is shocking," said Leigh Henry, Senior Policy Advisor at World Wildlife Fund. “Over the past year, President Obama has made unprecedented commitments to end illegal wildlife trade. Today’s declaration by Secretary Jewell provides an important opportunity to put those words into action by holding Iceland accountable for undermining international law.”

Jewell’s declaration follows a finding in July 2011 by the U.S. Department of Commerce that Iceland has undermined the International Convention for the Regulation of Whaling by hunting whales in defiance of the International Whaling Commission’s global moratorium on commercial whaling. Although Iceland put its fin whale hunt on hold in 2011 and 2012 following the Commerce Department certification, it has continued to kill minke whales and export thousands of metric tons of meat and blubber—including from endangered fin whales—to Japan.

“It is deeply regrettable that a single Icelandic whaler backed by the government is undermining the global ban on commercial whaling which is there to secure the future of the world's whales," said Phil Kline, senior oceans campaigner of Greenpeace USA. “The time is now for the U.S. to show global leadership to end this senseless hunt of endangered fin whales by immediately imposing economic sanctions on Icelandic companies directly linked to their whaling.”

In the past, the U.S. has used the Pelly Amendment to impose or threaten trade sanctions against countries trading in endangered species. So far, however, President Obama has stopped short of using the full range of actions available against Iceland, ordering only a diplomatic response as a result of the Commerce Department certification.

“We have waited nearly three years for the Department of the Interior to respond to our petition against Iceland," said Susan Millward, executive director of the Animal Welfare Institute. “There isn’t time to wait 60 more days for President Obama to announce his response—134 of these incredible fin whales suffered needlessly last year, and the U.S. must ensure that Iceland does not continue whale hunting as planned in 2014.”

In addition to certifying Iceland under the Pelly Amendment for whaling (in 2004 and 2011), the U.S. has certified Japan, Norway and Russia for diminishing the effectiveness of the International Convention for the Regulation of Whaling, the convention that established the International Whaling Commission (IWC).

The U.S. imposed trade sanctions under the Pelly Amendment against Taiwan in 1994 for illegal trade in rhino and tiger parts that diminished the effectiveness of CITES. Its threat to sanction Japan for its imports of hawksbill turtle shell is credited with stopping that trade in 1992.

"Iceland's resumed killing of endangered fin whales has crossed a clear line in the sand," said Allan Thornton, president of the Environmental Investigation Agency. “We appeal to President Obama to stand with us to defend the fin whales by enacting trade sanctions against Iceland's whaling operation."

CITES responded to the IWC’s moratorium on commercial whaling by transferring all whales species to its Appendix I, thereby prohibiting international commercial trade in whale products. Japan, Norway and Iceland lodged reservations that allow them to trade legally in whale products with each other and with non-parties. However, as recently noted by the United Nations Environment Programme’s World Conservation Monitoring Centre—which drew attention to Iceland’s large exports of whale products—trade under reservation can result in “sizeable levels of trade and may undermine the effectiveness of Appendix I listings.”

Iceland has ignored all diplomatic criticism of its whale hunts by the IWC as well as several strongly worded official diplomatic protests from a wide range of countries in 2003, 2006, 2009 and 2011. President Obama responded to the commerce secretary’s certification of Iceland’s whaling in 2011 by ordering a diplomatic response by Cabinet secretaries that is described as “insufficient” by conservation and animal welfare groups.

NGOs have called for trade sanctions against Icelandic companies linked to Iceland’s ‘Hvalur (meaning "whale") Group’, including Hampiðjan, one of the largest fishing gear suppliers in the world, and HB Grandi, whose chairman is also the CEO of Hvalur. HB Grandi is Iceland's largest fishing and seafood export company, controlling more than 10 percent of the country's fishing quotas. NGOs have persuaded several fish wholesalers and retailers in the United Kingdom, Germany and the  U.S. to agree not to source fish from HB Grandi, but want the Obama administration to formally embargo Hvalur Group products.