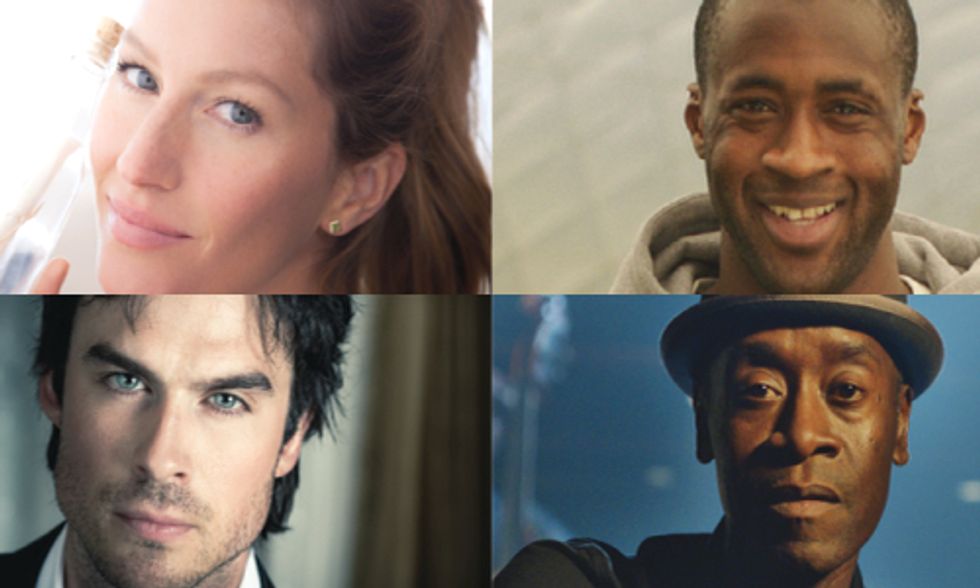 Supermodel Gisele Bündchen, actors Don Cheadle and Ian Somerhalder and footballer Yaya Touré—all UNEP Goodwill Ambassadors—have launched a challenge to see who can rally the most registered activities for World Environment Day 2014. Their call to action, Message in the Bottle, asks individuals around the world to join one of the celebrities' teams and make a difference by pledging to take action in support of World Environment Day (WED), which culminates globally on June 5.

The campaign features a variety of public service announcements (PSA) in seven languages which will run on CNN, large format billboards in Times Square in New York City and Piccadilly Circus in London, and on-line.

In a unique creative approach, viewers get to see Don Cheadle playing trumpet to prepare for his upcoming directorial debut and lead role as Miles Davis, Gisele practicing her beloved martial art, Kung Fu, and Yaya Touré getting mentally prepared for the run up to the World Cup.

"These global celebrities are giving fans a unique glimpse into the private moments that make them who they are," said Jeffrey Nachmanoff, director of the PSAs, screenwriter for the climate blockbuster The Day After Tomorrow and writer/director of Traitor and the CBS series Hostages.

"They are then interrupted in these moments by a message in the bottle which is an unexpected play on their roles and provides a twist that should get the viewer's attention and encourage them to want to go to the site to get involved," Nachmanoff added.

This is the second time that Nachmanoff has lent his talent to create a UNEP public service announcement, the first was for the Seal the Deal Climate Campaign in 2009. He worked alongside accomplished cinematographers, Jim and Nicole Whitaker on both UNEP projects. Game 7 Films of New York City produced the films.

Notably, the award-winning band The Police donated the sound track of the iconic song, Message in the Bottle, to support the campaign.

WED is the United Nations' principal vehicle for encouraging worldwide awareness and action for the environment.

Over the years, it has grown to be a broad, global platform for public outreach that is widely celebrated in more than 100 countries. It's the "people's day" for doing something good for the environment, and for galvanizing individual actions into a collective power that generates a substantial positive impact on the planet.

The objective is to encourage a greater understanding of the importance of SIDS and the urgency to help protect the islands in the face of growing risks and vulnerabilities, particularly as a result of climate change, and to demonstrate the connections between these ecosystems and ours.

From Trinidad and Tobago to Tonga, Samoa to Suriname, the problems that these small islands face—climate change, waste management, unsustainable consumption, degradation of natural resources, extreme natural disasters in the midst of overpopulation and continuing industrialization—are the problems that face us all.

For SIDS, climate change is foremost among these challenges, as global warming is causing ocean levels to rise.

According to the Intergovernmental Panel on Climate Change, global sea levels are rising at an increased rate. This is projected to be increase even further this century. When the global temperature warms, seawater expands and occupies more space. Sea levels also rise when polar ice melts.

Coastal communities in every country are then threatened with floods and storm surges, to which SIDS are the most exposed. Many of these islands' inhabited areas and cultural sites are potentially in danger of being lost to sea-level rise.

WED 2014 underscores that we all face similar challenges and are connected and united by a common goal: a sustainable and prosperous life for everyone on this planet. Every action, pledge and activity counts and, when multiplied by a global chorus, becomes exponential in its impact.

Doing Nothing Isn't an Option: How to Avoid the Worst of Climate Change