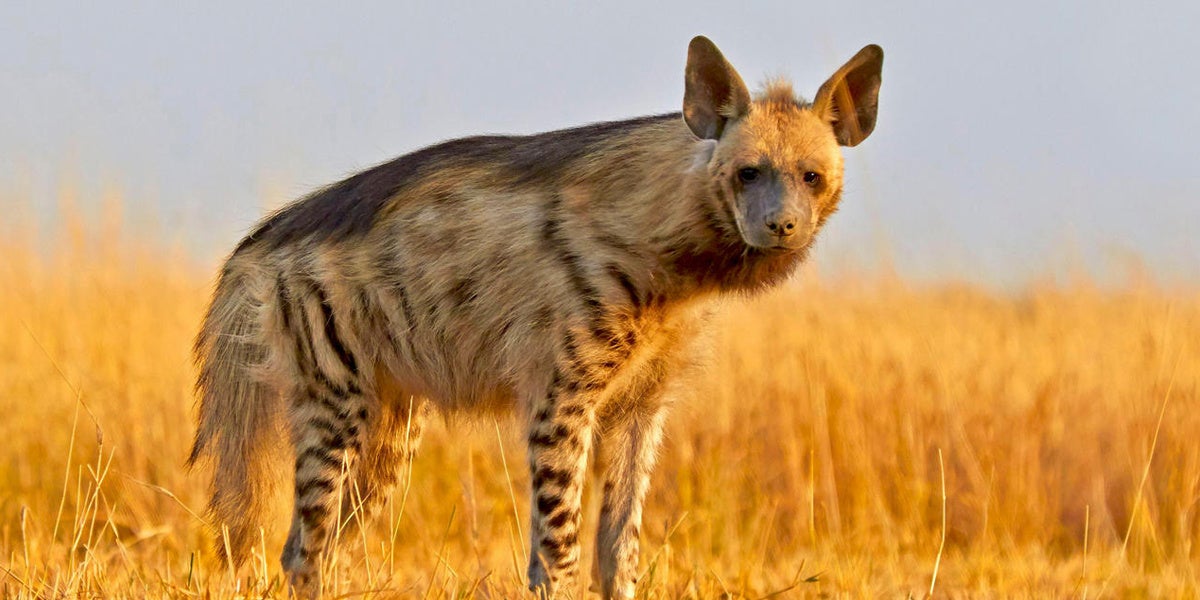 The striped hyena gets a bad rap. Not only does much of the world mistake it for its cousin, the spotted hyena—which The Lion King taught us to despise—but its shaggy coat, skittish nature and nocturnal lifestyle have all contributed to the idea that this creature is spooky at best. And at worst?

“Due to their habit of scavenging, striped hyenas often get associated with the dead,” said Priya Singh, a wildlife biologist with the Researchers for Wildlife Conservation in Bangalore, India.

While studying the species in Rajasthan, Singh met villagers who referred to striped hyenas as “the horses of witches.” As the legend goes, witches ride on the backs of these animals. When a hyena comes across a carcass and eats the flesh, the witch feeds on the soul of the dead.

In parts of the Middle East, similar misconceptions exist. Some Arab cultures believe that striped hyenas are grave robbers. Others contend that a striped hyena can put a spell on people before dragging them back to a cave and eating them alive.

“I had a Bedouin guy swear to God that he was enchanted by a hyena and that his friend saved him by slapping him on the head at the last moment,” said Jonathan Tichon, a Ph.D. student who performed camera-trap studies on striped hyenas while at Ben-Gurion University of the Negev in Israel.

All of this bad PR can have real-world consequences. There are several videos online of people abusing striped hyenas, with wire muzzles, repeated kicking, boulders—not the type of stuff you want to see.

According to the International Union for Conservation of Nature (IUCN), the species is “near threatened.” From India and the Middle East to southeast Africa, there may be fewer than 10,000 of the animals left, and that number is thought to be decreasing.

I say “thought to be” because there are very few researchers working on this species. In addition to being roundly disliked, the animals exist at extremely low population densities. While spotted hyenas are known to run around in clans of as many as 80 members, striped hyena clans max out at about half a dozen. This means that even a huge area can have just a few of the animals, making it difficult to keep tabs on the population.

Being few and far between also makes the animals vulnerable to changes in land use, said Singh. New urban centers, railway and road construction, and extensive fencing carve up and reduce the habitats of striped hyenas in India. Mining and quarrying straight-up demolish their den sites.

Tichon said run-ins with automobiles may now be the leading cause of death for the striped hyena in Israel, although it’s also possible we’re simply more aware of such incidents now that everyone has a phone in their pocket and access to social media.

When it comes to threats to the striped hyena, we have to talk about traditional medicine as well. Because they are thought to be touched by the devil, body parts are sometimes sought for healing and for boosting potency. “Dried penis of striped hyena is being used as a lucky charm,” said Tichon. “It’s supposed to give you man-powers or something―I don’t know.”

Striped hyena skins and especially brains are also worth money on the black market, according to the IUCN. And striped hyena meat has recently come into vogue following a declaration that it can be considered halal. According to Ahmad al-Bouq, director of the Wildlife Research Center in Ta’if, Saudi Arabia, demand for the meat is now so fierce that the animals are threatened with extinction in that country. One interviewee in the Saudi Gazette was quoted as saying, “Hyena meat has a unique taste and has an effect that is stronger than well-known aphrodisiacs.”

Tichon made it very clear that he thinks the animals are quite lovely and undeserving of their negative reputation. But even he said striped hyena is one of the absolute last meats he’d consume. “Striped hyenas eat terrible stuff,” he explained. During his time in the Israeli armed forces, Tichon said, striped hyenas would sometimes come into camps and eat from the latrines.

But their diet, while off-putting, is something to respect. Whether it’s rotting flesh or fecal matter, these animals are a bit like four-legged vultures. They have the ability to stomach every manner of filth, which helps speed up decay and reduces the amount of nasty microbes lingering about.