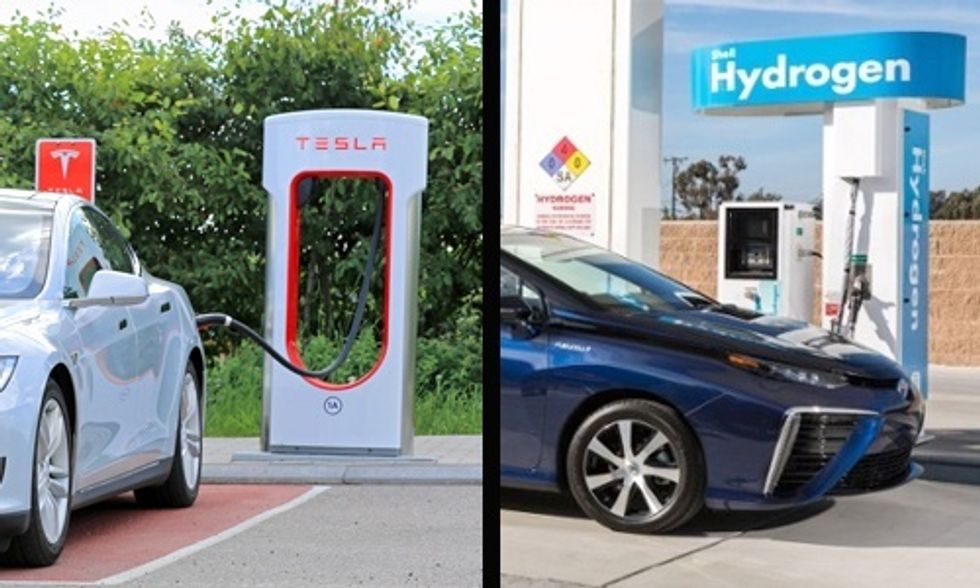 The debate between electric vs. hydrogen fuel cell cars rages on. Last year, Toyota made a big announcement that they were getting closer to unveiling a hydrogen fuel cell car, calling it the "ultimate environmentally friendly car." That car, the Mirai is already available in Japan and Europe. And today, in conjunction with Back to the Future Day, the Mirai became available in the U.S.

"More than 2,000 people so far have requested to buy a Mirai in California, where it is first available," said Toyota in a press release.

“A piece of the future is now a reality with the Toyota Mirai,” Christopher Lloyd, who played eccentric scientist Doc Brown in the Back to the Future trilogy, said. “Compared to some other technologies predicted in the film, like rehydrated pizza or self-tying shoes, this technology has the real potential to change the world.”

“It drives like a regular car, operates like a regular car. You can refuel in three to five minutes and, you know, do 350 miles on a trip,” Craig Scott, Toyota’s national manager for advanced technologies in the U.S., told Ira Flatow in a Science Friday interview last month.

There are far more companies investing in electric cars right now. Tesla's fleet is all-electric and many of the major car companies already have or are working on an electric car. Even Apple is rumored to be developing an all-electric vehicle under its so-called "Titan" project. And Toyota's own hybrid electric Prius, which has been around for 15 years, is wildly popular. Tillemann said on NPR's Marketplace earlier this year, "It’s almost inevitable that the car of the future is going to be electric, and it’s going to drive itself.”

Currently, Hydrogen fuel cell vehicles "don't produce much less CO2 than your standard hybrid electric vehicle because of the fact that hydrogen comes from methane," said Tillemann. "And when you produce the hydrogen from methane, you release a lot of CO2 and it requires a lot of energy." But Tillemann says if someone were to "come up with a way to produce zero carbon hydrogen ... then hydrogen fuel cell vehicles are a great idea."

Actually, we might be getting closer to producing zero carbon hydrogen. Check out this video from Toyota, which features Christopher Lloyd (Doc Brown) and Michael J. Fox (Marty McFly) to find out how:

For further debate on hydrogen fuel cell vs. electric cars, check out the interview that aired on Science Friday with Ira Flatow: