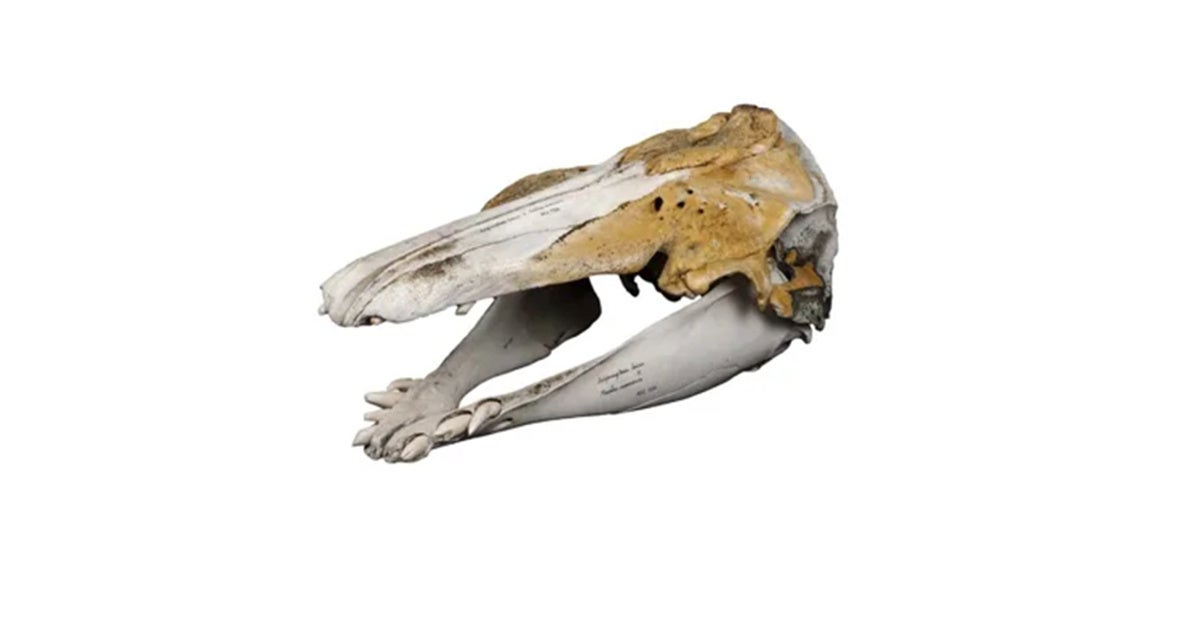 In the 1980s, a Greenlandic subsistence hunter shot and killed a whale with bizarre features unlike any he had ever seen before. He knew something was unique about it, so he left its abnormally large skull on top of his toolshed where it rested until a visiting professor happened upon it a few years later.

With a massive snout and long, spiraling, horizontal teeth, it had to be something the world had never seen. Nearly 30 years later, DNA analysis of tissue found inside the skull is cluing the science world into how this mysterious skull came to be.

Cue the “narluga,” a narwhal-beluga hybrid now described in the journal Nature. A team of researchers scraped tissue samples from the skull and conducted DNA and stable isotope analysis to compare against other narwhal and beluga DNA. Most of the mysterious skull’s DNA was a fifty-fifty mix of the two, The Atlantic reports. They determined that the skull belonged to a male, first-generation hybrid from a female narwhal and a male beluga. Typically only male narwhals have tusks likely for attracting females but this narwhal mom-to-be was keen on her tuskless beluga suitor, notes The New York Times.

“As far as we know, this is the first and only evidence in the world that these two Arctic whale species can interbreed. Based on the intermediate shape of the skull and teeth, it was suggested that the specimen might be a narwhal-beluga hybrid, but this could not be confirmed. Now we provide the data that confirm that yes — it is indeed a hybrid,” said evolutionary biologist Eline Lorenzen.

The skull was first described in a 1993 issue of Marine Mammal Science when researchers characterized the “anomalous whale’s skull” as being “much larger than those of normal narwhals and belugas,” particularly its “relatively long and massive” mandibles. Its teeth were unlike those of any known cetacean and yet resembled both those of a narwhal and a beluga. Narwhals often have just one spiraling tusk whereas belugas have uniform conical teeth in straight rows. The “Narluga” had a mix of the two.

“This whale has a bizarre set of teeth. The isotope analysis allowed us to determine that the animal’s diet was entirely different than that of a narwhal or beluga — and it is possible that its teeth influenced its foraging strategy. Whereas the other two species fed in the water column, the hybrid was a bottom dweller,” said first study author Mikkel Skovrind.

Beluga and narwhals are the only toothed whales endemic to the Arctic and belong together in the family Monodontidae. They are similar in size, measuring between 3.5 and 5.5 meters (approximately 11.5 and 18 feet) long, and are known for their social intellect but have stark differences in their morphology and behavior.

So why did the two decide to mate when there are plenty of other — er, whales — in the sea? The science is still out on that one, but the study authors note that studying such mating practices could lead to a better understanding of modern evolutionary histories — and potentially help describe an entirely new phenomenon.

“We have analyzed the nuclear genomes of a narwhal and a beluga, but see no evidence of interbreeding for at least the past 1.25 million years of their evolutionary histories. So, interbreeding between the species appears to be either a very rare or a new occurrence. To my knowledge, it has not been observed or recorded before,” says Eline Lorenzen.

The two species have been known to intermingle, however. Last fall, the non-profit Group for Research and Education on Marine Mammals (GREMM) captured aerial footage of a band of Canadian belugas frolicking through the frigid waters alongside a seemingly adopted young narwhal.