Hurricanes Can Also Cause Chemical Disasters 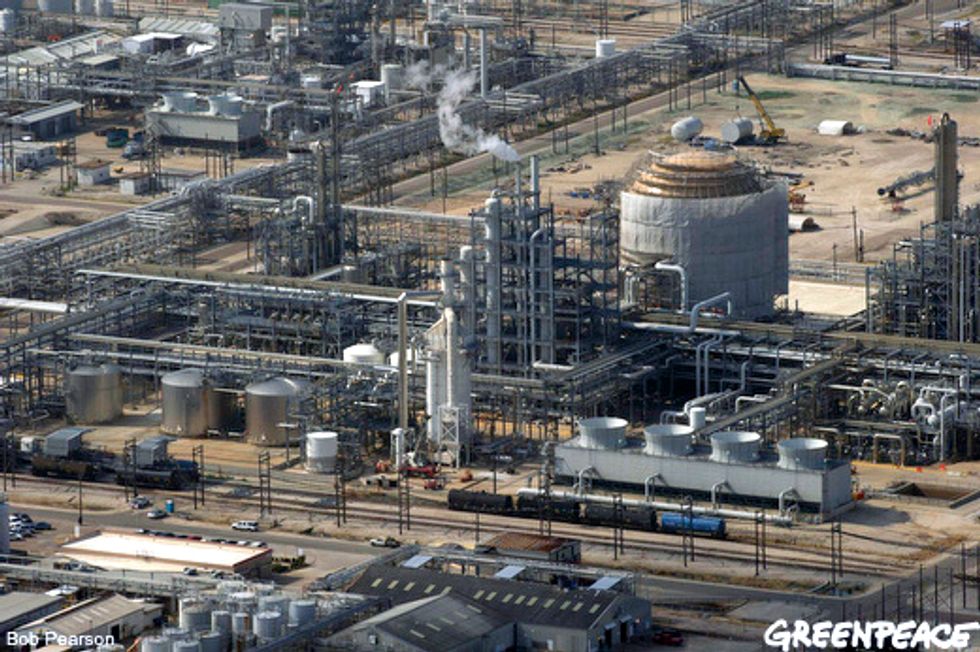 Even in good weather a major threat looms over many of our largest cities. The threat is in the form of poison gases stored at thousands of U.S. based chemical plants. In the event of an accident, terrorist attack or another climate disaster such as Hurricane Sandy, millions of lives could be put in jeopardy.

Although a worse case chemical disaster didn't happen this time, it easily could have. For example, it was widely reported that Sandy knocked over a 22 car freight train adjacent to the New Jersey Turnpike in one of the most densely populated areas of the U.S. If just one of those rail cars was carrying a poison gas such as chlorine and it had ruptured, more than a million people would be at risk of immediate injury or death.

Dow Chemical's Texas Operations facility in Freeport is the global group's largest integrated site. The site contains more than 3,200 acres of waterways and pipeline corridors and houses more than 1,900 buildings across the site. Photo by Bob Pearson

Trains routinely service major chemical plants. There are 38 high risk chemical plants in New Jersey, New York and Pennsylvania that each put 100,000 or more workers and residents at risk of a poison gas catastrophe. When these plants suddenly lose power they can become even more dangerous. Last year a sudden power failure triggered a "shelter-in-place" warning to Texas City communities surrounding BP, Valero and Marathon refineries.

Hurricanes and human error aren't the only threats to chemical facilities. On Oct. 11, Secretary of Defense Leon Panetta issued a chilling warning saying that these same chemical plants and other sectors are vulnerable to cyber attacks, "The collective result of these kinds of attacks could be a cyber Pearl Harbor."

In the wake of horrific Sept. 11 attacks, the nation's chemical facilities commanded the attention of both political parties. Leaders such as Governor Christine Whitman (R-NJ) gave voice to this problem from inside the Environmental Protection Agency (EPA). Chemical facilities near the nation's capitol transitioned from deadly chemicals to safer alternatives. Bills were drafted in Congress to ensure that the millions of Americans who live in the shadow of a chemical plant would never be exposed to harm.

Activists outside the White House in Washington, D.C., July 26, after delivering 60,000 petitions calling on President Obama to impose rules requiring safer handling of chemicals at facilities across the U.S. that put millions of people at risk from chemical disaster. Photo by Robert Meyers/Greenpeace

But the oil and chemical lobby and their allies in Congress (including Republican Vice-Presidential nominee Representative Paul Ryan) and the Bush White House opposed promising legislation (H.R. 2868) and even helped scuttle Whitman's plan to use the Clean Air Act's "Bhopal amendment" to prevent chemical disasters at high risk chemical plants. Now, over a decade later, these plants still pose a threat to us, in major cities and small towns, every single day.

One in three Americans lives in the shadow of one of these facilities, spread out across the country. In fact, the danger zone of these plants often extend so far that you might not even know you live or work in it. Due to the volume of chemicals stored at these facilities, an accident or an attack could release a cloud of poison gas that could endanger people 14 miles down wind. Many of these facilities are more vulnerable to storms because they are located in ports along our coasts. They are both environmental and security risks—the U.S. Army Surgeon General estimated that an attack on just one U.S. chemical plant could kill or injure up to 2.4 million people.

Fortunately there are proven affordable solutions. Since 2009, The Clorox Company converted all of their plants to safer processes. Yet the industry as a whole has demonstrated a gross failure to act.

If Hurricane Sandy had also triggered a chemical disaster it would have exponentially increased the already historic impact it has already wrought. It's time to get serious about these hazards. President Obama and the EPA can use the Clean Air Act to safeguard people working and living down wind of our nation's highest risk chemical plants. Environmental and labor organizations stand behind this common sense proposal. It's also smart politics, and it would have the support of anyone who's concerned about protecting the safety and security of their city, their job and the environment.

Larry Cohen is the president of the Communications Workers of America and Philip D. Radford is executive director of Greenpeace USA.