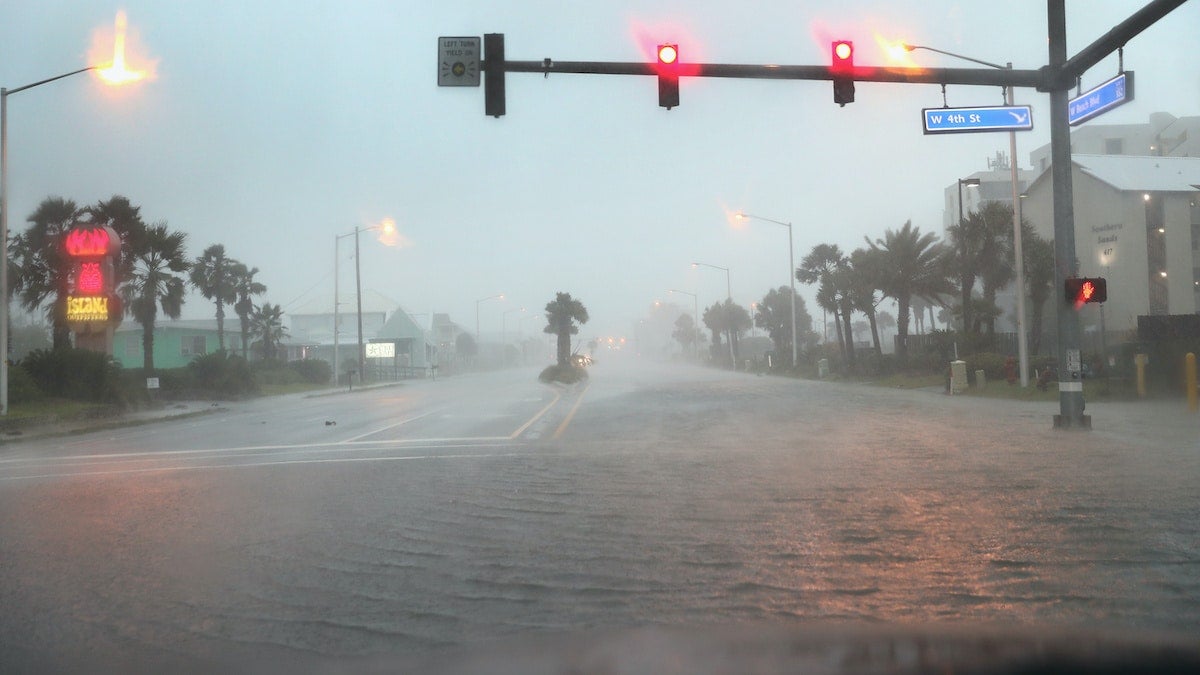 The Florida panhandle, the Alabama coast and Mississippi are seeing Hurricane Sally batter its shores Wednesday morning as the slow-moving hurricane starts to make landfall. The storm intensified overnight as it churned slowly over the Gulf of Mexico. It’s expected to be a Category 2 storm when it fully makes landfall Wednesday during the mid-morning hours from 8 a.m. to noon, according to AccuWeather.

Even though the center of the storm stayed offshore over night, the effects of Hurricane Sally were being felt. Some locations along the Gulf Coast have already received 20 inches of rain and the National Weather Service (NWS) in Mobile, Alabama warned that amount could double, considering how quickly the rain has already come down, as ABC News reported.

“These warnings are issued for exceedingly rare situations when a severe threat to human life and catastrophic damage from a flash flood is happening,” the NWS said in a statement Wednesday morning. “This is a life-threatening situation. Seek higher ground now.”

Early Wednesday morning, flash flooding inundated roads in the southeast corner of Alabama and the western part of Alabama. According to poweroutage.us, nearly 300,000 homes have already lost power, as The Weather Channel reported.

On Tuesday night, the slow moving hurricane was chugging toward land at just 2 mph. The slow pace meant areas of the Gulf Coast were feeling 70 mph winds and receiving rain from the outer portion of the hurricane, according to CNN. As Sally approached landfall early Wednesday morning, some areas registered winds peaking at 105 mph, according to AccuWeather.

To prepare for the storm and the possibility of water main breaks that would exacerbate the flooding or release sewage, the Escambia County Utilities Authority in Pensacola, Florida shut off the water system around 11:00 pm Tuesday night since the storm surge and the rising tides overwhelmed the sewer system, according to CNN.

Due to the storm’s slow movement, the National Weather Service predicts that the relentless wind and rains will last for most of the day on Wednesday, as The Washington Post reported. That slow pace means the area could see 30 inches or more of rain on Wednesday alone.

The stalling of storms has been notably costly recently. Last year, Hurricane Dorian stalled over Bermuda and caused widespread destruction from its relentless rains and wind. And, in 2017, Hurricane Harvey was no longer a hurricane when it stalled over Houston and dropped more than 4 feet of rain, according to The New York Times.

“Our work indicates that climate change is favoring this phenomenon,” said Michael E. Mann, a climate scientist at Penn State, in an email message to The New York Times. “It likely plays a role in the decreased translation speed of landfalling hurricanes.”

Mann and his colleagues have found that Arctic warming is affecting the jet stream and not only causing hurricanes to stall, but also locking air in place to cause heat waves and other extreme weather, as The New York Times reported.

While Hurricane Sally has stalled near the Gulf Coast, it is not predicted to affect the areas that were hardest hit by Hurricane Laura several weeks ago. On Tuesday, the National Hurricane Center dropped its hurricane and tropical storm warning for New Orleans and the Lake Pontchartrain as Sally is too far east to hit those parts of Louisiana, according to AccuWeather.