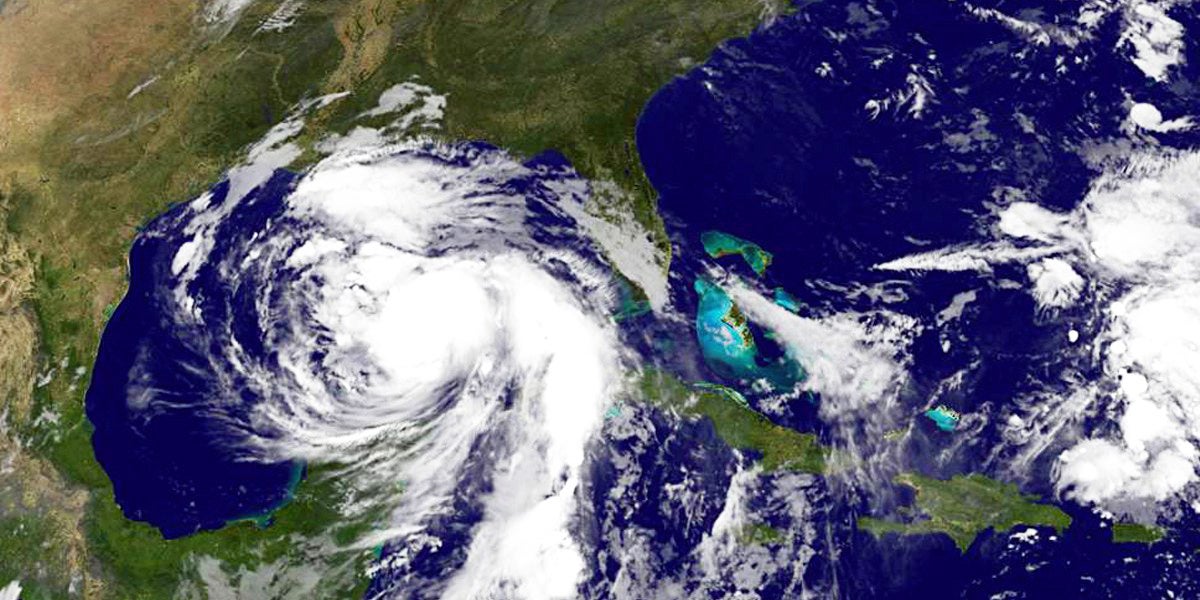 A hurricane warning was in effect from Grand Isle, Louisiana, to the Alabama/Florida border on Friday evening as Tropical Storm Nate, with sustained winds of 70 mph as of 11 p.m. EDT, sped through the narrow Yucatan Channel between Mexico and Cuba and into the Gulf of Mexico.

Update: Nate was upgraded to hurricane strength by the NOAA/NWS National Hurricane Center at 11:30 p.m. EDT Friday, with top sustained winds of 75 mph based on Hurricane Hunter reported.

Very intense thunderstorms were erupting on Friday night near Nate’s center, located about 90 miles northeast of Cozumel as of 8 p.m. EDT Friday. Nate was in the process of closing off an eyewall, and it is likely to be a Category 1 hurricane on Saturday night when it makes landfall on the U.S. Gulf Coast between Southeast Louisiana and the Florida Panhandle.

Nate’s strongest winds and heaviest rains missed the northeast tip of the Yucatan Peninsula, which was located on the left (weak) side of the storm. As of 9 p.m. EDT Friday, the top winds in Cozumel, Mexico and Cancun, Mexico had not exceeded 20 mph, and only intermittent light rain had been reported. The Hurricane Hunters found Nate’s strongest winds were the southeast of the center, over the Yucatan Channel, where Buoy 42056, 120 nm ESE of Cozumel, reported sustained winds of 56 mph, gusting to 69 mph, just after 4 p.m. EDT Friday. 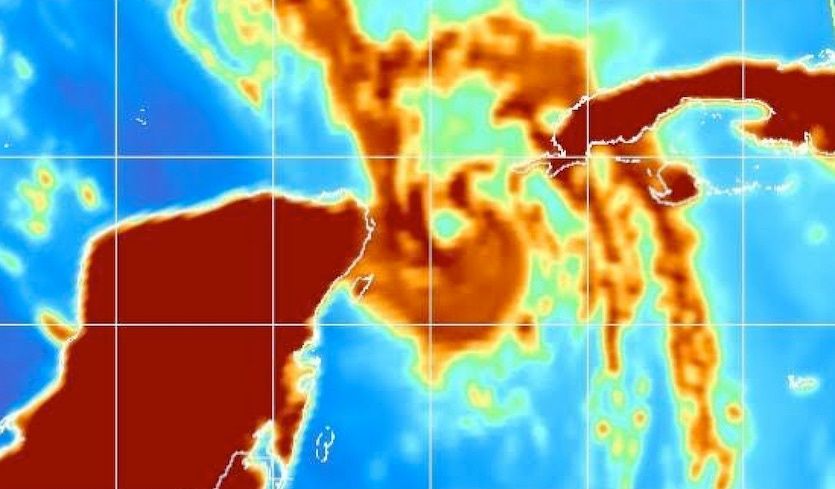 Above: Microwave satellite view of Nate taken at 7:45 p.m. EDT Oct. 6, showing a calm area at Nate’s center surrounded by precipitation. The wavelength at which this image was collected, 37 GHz, senses precipitating clouds but does not highlight deep convection (intense showers and thunderstorms). Imagery at the 85 GHz wavelength, which does distinguish deep convection, showed that Nate lacked a complete eyewall at this point. Naval Research Laboratory

Dangerous heavy rains from Nate have affected large parts of Central America. As of Friday evening, Nate had led to a total of 25 deaths in Central America; hardest hit were Nicaragua with 12 deaths, and Costa Rica with nine. Satellite rainfall estimates show that Nate has dumped 8+” of rain on the Pacific side of Costa Rica, Nicaragua and Panama, and also along the northern coast of Honduras and the eastern coast of the Yucatan Peninsula, in both Mexico and Belize. 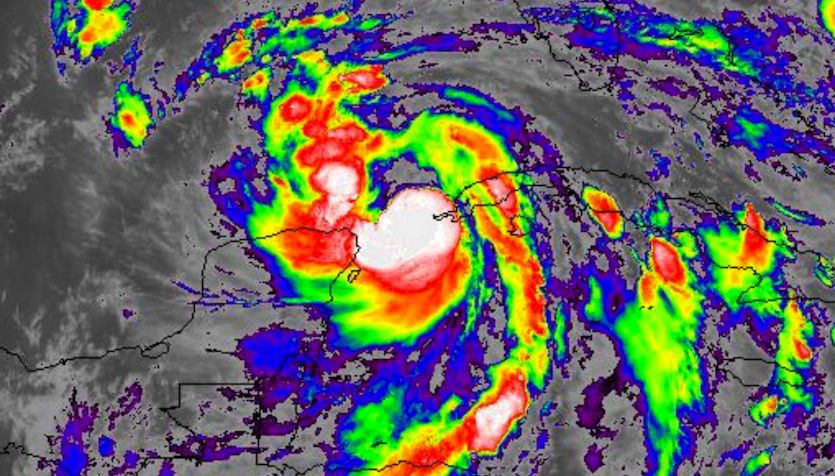 Forecast for Nate Through Landfall

Satellite images early Friday evening showed that Nate continued to struggle to consolidate; the storm lacked symmetry and had an odd, clumpy appearance to its heavy thunderstorms. However, by late evening, Nate had finally developed a well-formed central dense overcast (CDO) over its center—the large, thick area of high cirrus clouds that normally appears when a storm becomes well-organized and nears hurricane strength. Microwave imagery showed that Nate appeared to be wrapping an eyewall around its east side.

Conditions will be quite supportive of intensification through Saturday. Wind shear will be light to moderate, around 10 knots, and the surrounding atmosphere will remain quite moist, with mid-level relative humidity in the 70 – 80 percent range. Sea-surface temperatures along Nate’s path will remain near or above 29°C (84°F)—about 1°C above average for early October—until a few hours before landfall. The eastern part of Nate’s circulation will be passing over a warm eddy associated with the Loop Current, which will help keep Nate from churning up cooler water. Nate’s rapid forward speed will have a similar effect. 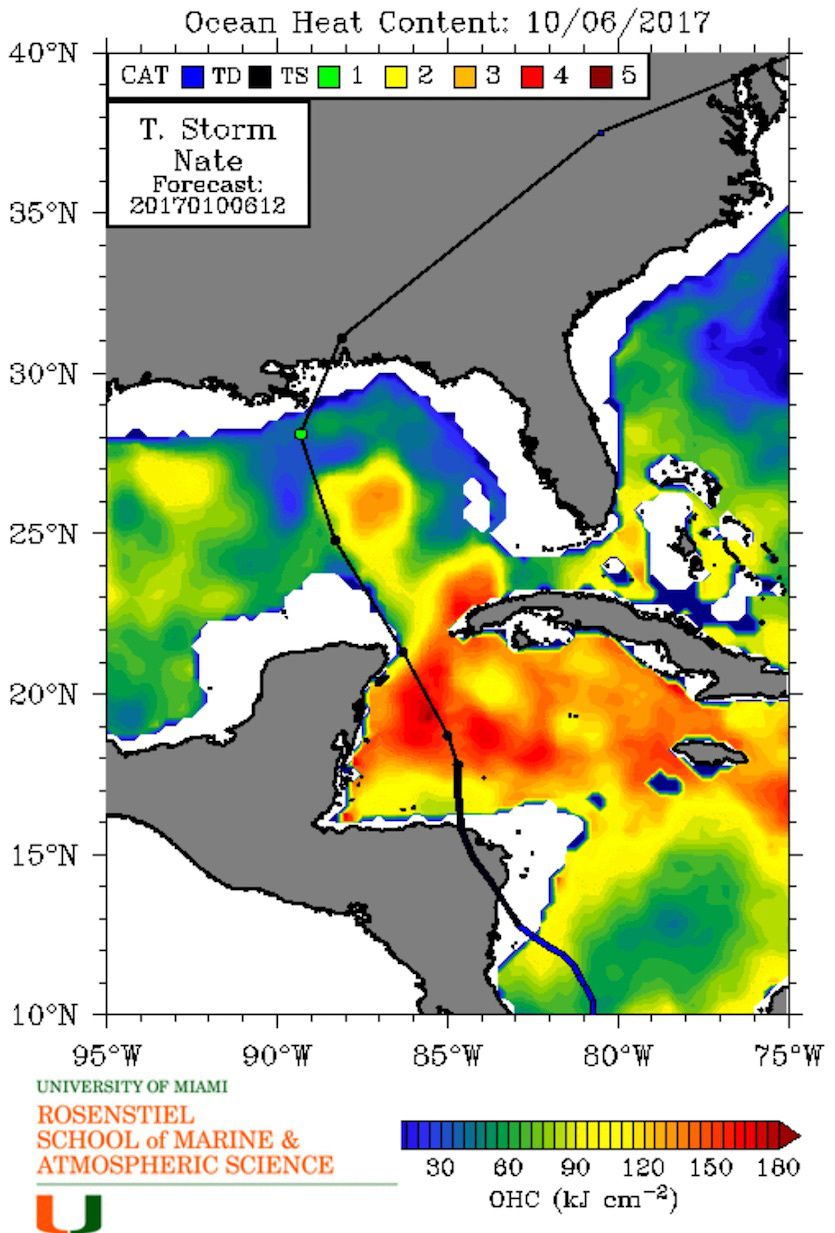 Figure 2. Ocean Heat Content (OHC) for Oct. 6. Forecast positions for Nate from the 8 a.m. EDT Friday NHC forecast are also shown. OHC values in excess of 80 kilojoules per square centimeter (yellow-green colors) are often associated with rapid intensification of hurricanes. On Saturday, the eastern part of Nate’s circulation will be passing over the northern portion of the Loop Current, where a warm eddy appears to be attempting to break off. University of Miami Rosenstiel School of Marine and Atmospheric Science

NHC defines rapid intensification as an increase in sustained winds of at least 30 knots (35 mph) in 24 hours. Given the factors above, this seems possible, though it’s far from guaranteed. Nate remains an asymmetric storm, embedded in a complex larger circulation, so it is unlikely to crank up as dramatically as some other rapid intensifiers we’ve seen this year. The 0Z Saturday run of the SHIPS statistical model gave Nate a 31 percent chance of gaining at least 30 knots of intensity in 24 hours, and a 47 percent chance of gaining at least 25 knots. However, Nate’s less-than-ideal structure is not reflected in the SHIPS output. Our top dynamical models, including those tuned for intensity prediction such as the HWRF and HMON, were surprisingly low-key on the odds of Nate strengthening. The 18Z Friday runs of the GFS, HWRF, and HMON dynamical models all bring Nate to the U.S. Gulf Coast as a tropical storm. Nate’s upgrade to hurricane strength late Friday night makes these model projections quite suspect, though.

Taking all these mixed signals into account, the prudent approach is to get ready for Nate to arrive on the Gulf Coast as a higher-end Category 1 storm—with a chance of pushing into the Cat 2 range—and keep our fingers crossed that Nate will fail to maximize its potential, as the dynamical models insist.

The track forecast for Nate is quite straightforward. As Nate enters a region of strong upper-level steering, it will continue briskly toward the north-northwest on Saturday and will be approaching the U.S. Gulf Coast on Saturday night, most likely somewhere between New Orleans and Pensacola. Nate is projected to angle toward the north-northeast around this time, and the exact location of this turn will be crucial to the landfall location. If the turn is delayed, landfall could be in far southeast Louisiana, whereas a faster turn will bring the center closer to the coast of Alabama or the far western Florida Panhandle.

Winds: Peak winds in Nate will hinge on how quickly the storm intensifies on Saturday. The hurricane-force wind field at landfall is not expected to be broad—perhaps just 20 or 30 miles wide. Tropical-storm-strength winds could affect a much broader region, up to 200 miles wide, as Nate pushes inland. As we saw with Hurricane Irma in Florida, sustained winds below hurricane strength can still be enough to bring down trees and power lines in wet soil and produce widespread power outages.

Since Nate will make landfall as a fairly fast-moving system (around 15 – 20 mph), there will be a stronger-than-usual asymmetry to its wind field, with the bulk of the strong winds to the right (east) of Nate’s center. NOAA’s Atlantic Oceanographic & Meteorological Laboratory explained: “In general, the strongest winds in a hurricane are found on the right side of the storm because the motion of the hurricane also contributes to its swirling winds. A hurricane with a 90 mph [145 km/hr] winds while stationary would have winds up to 100 mph [160 km/hr] on the right side and only 80 mph [130 km/hr] on the left side if it began moving (any direction) at 10 mph [16 km/hr]. Note that forecasting center advisories already take this asymmetry into account and, in this case, would state that the highest winds were 100 mph [160 km/hr].” 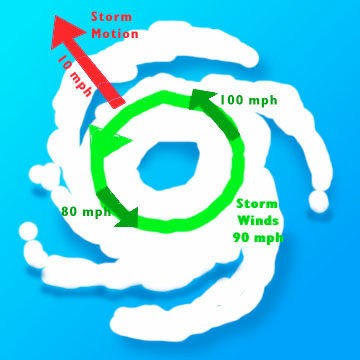 Figure 3. Diagram showing the additive and subtractive effect of storm motion on peak winds at either side of a tropical cyclone’s center. Chris Landsea (NOAA / NHC), courtesy NOAA / AOML

Surge: A storm surge warning is up for the Gulf Coast from Morgan City, Louisiana, to the Okaloosa/Walton county line in Florida, as well as along the northern and western shores of Lake Pontchartrain. The highest surge from Nate will arrive quickly on Saturday night, and will likely peak before dawn Sunday, so residents need to take the surge threat seriously and make final preparations as soon as possible on Saturday. As of 8 p.m. EDT Friday, the following inundations above ground level are possible with Nate, assuming the storm were to arrive during high tide:

Because the daily high tide across this region occurs during the pre-dawn hours, it is quite possible that Nate will reach the coast near high tide. Tidal range between low and high tide is 1 – 1.3′ along the central Gulf Coast, so the timing of Nate’s storm surge with respect to the high tide can cause an additional foot or so of flooding. High tide in Mobile, Alabama is at 1:46 a.m. local time Sunday, and it will be one of the highest high tides of the year, due to the full moon. Low tide is at 10:12 a.m. Saturday. At Shell Beach, Louisiana, on the east side of New Orleans, high tide is at 4:29 a.m. local time Sunday, and low tide is at 12:14 p.m. Saturday.

Rains: Nate’s rapid motion will limit the total amount of rainfall at any one spot, and the overall accumulations should be less than those observed during slower-moving tropical cyclones. However, Nate is embedded in a very moist atmosphere, and torrential rain could still fall in short periods. Nate’s quick-hitting rains could exacerbate the strain on the troubled levee system in and around New Orleans, especially if Nate tracks toward the western end of its forecast range. Localized rainfall totals of 6 – 10″ are expected close to Nate’s landfall location, and intense rainbands will stream onshore well east of Nate’s center across the Florida Panhandle. A large area of 4 – 12″ rains, perhaps including Atlanta and Nashville, may develop as Nate accelerates into the southern Appalachians on Sunday. Rains of 2 – 6″ will stream across the northern Appalachians and into southern New England on Monday, as Nate races northeast as a fast-weakening tropical cyclone.