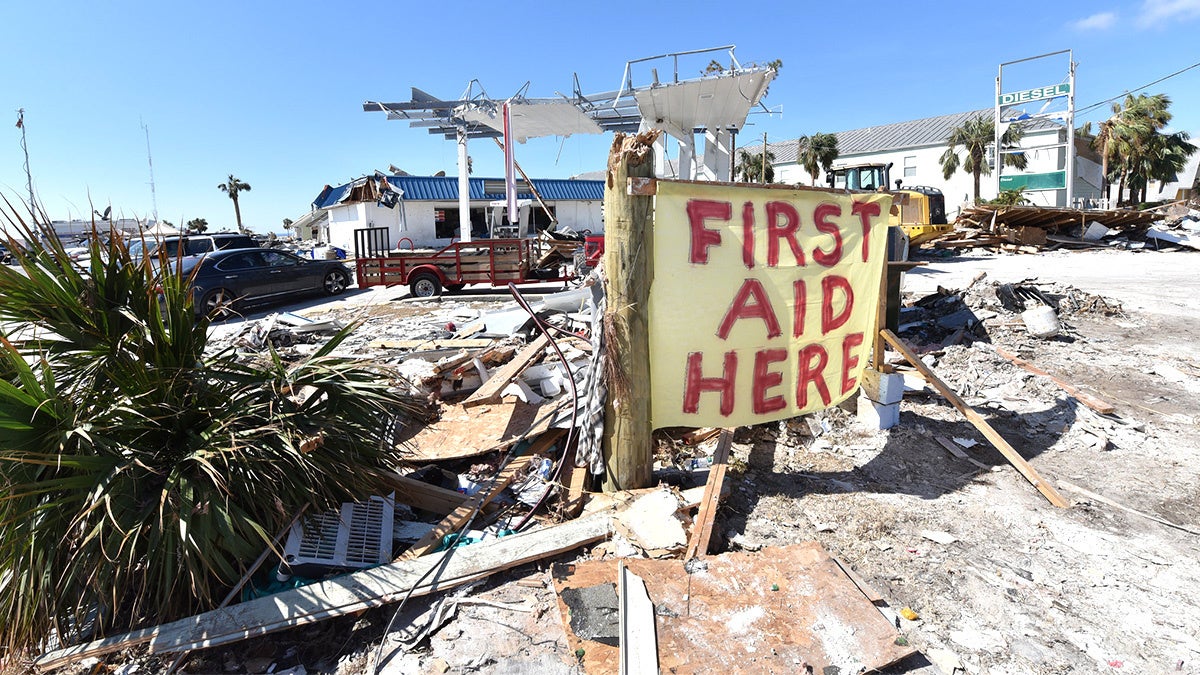 When Hurricane Michael made landfall on Florida’s Panhandle on Oct. 10, 2018, as a Category 5 storm it was only the fourth on record to have ever hit the U.S. mainland. The storm surge it brought about, along with 160-mile-per-hour winds, leveled coastal communities from Panama City to the town of Mexico Beach.

Then the storm continued northward, causing flooding in Georgia, South Carolina, North Carolina and Virginia. The National Oceanic and Atmospheric Administration, a government agency, attributes a total of 16 deaths to the storm and the authorities say that Michael killed another 43 people indirectly.

I’ve been traveling throughout the Florida Panhandle – the area Michael hit hardest – to towns like Marianna and Port St. Joe, meeting with a wide range of dedicated community members and conducting a survey of recovery efforts by leading a team of public administration student researchers. We have identified nearly 0 million in donated money, supplies and time.

Most of this support garnered within 11 months of the storm is coming from or being channeled through organizations within this part of Florida, near my home in Tallahassee. We’re finding that local residents are organizing themselves to meet lingering needs in the absence of substantial outside attention and support.

Even after getting .3 billion in assistance from the Federal Emergency Management Administration and other government agencies, much of the region remained devastated from Michael’s estimated billion in total damage.

Many of the region’s largest employers, including forestry companies and Tyndall Air Force Base, are still rebuilding a year later. So are school systems and homeowners.

But unless you live nearby, this may come as a surprise. Michael garnered less attention from the media and donors than the other storms that also caused damage on a massive scale, such as Harvey and Maria in 2017 and 2018.

Giving After the Storm

The gravity and force of this hurricane, which NOAA only upgraded to a Category 5 storm six months later, may never have fully registered on the public’s radar.

That may explain why Americans didn’t donate as much to support relief and recovery efforts following this disaster as they did a year earlier.

For example, the Red Cross collected donations totaling some million following Hurricane Irma, nearly triple the million it obtained after Michael a year later. But Irma only caused twice as much damage, according to NOAA.

The aftermath of other big storms like Sandy and Katrina have made it clear that the recovery process takes years to complete, with the burden falling on local nonprofits once the sense of urgency outside the immediate area dissipates.

In the largely rural Florida counties where Hurricane Michael hit hard, a few nonprofits are leading the way with rebuilding efforts that bring local religious congregations, businesses, governments and independent organizations together. These new networks are coordinating efforts by national, regional and local organizations that bring their own expertise and resources.

The donations, which include cash, services, supplies and volunteer labor, add up to about 5 million. While far less than the total of .3 billion in federal funding for the storm, this support equals about two-thirds of the 0 million Florida’s government has appropriated so far.

Nearly all of the funding is coming from organizations with a local presence.

Another reason why recovering from disasters takes so long is that relatively few post-disaster government programs serve renters, homeowners without clear property titles or the homeless. That leaves big gaps for charity to fill.

And when communities don’t get much in the way of donations after disasters, they have trouble meeting the needs of their most vulnerable. This is made worse by poor targeting and coordination of aid that can leave out rural or remote communities.

Donations come with fewer restrictions than government programs, giving nonprofits more flexibility. They tend to arrive quickly and do not need to wait on the government to appropriate money.

Throughout my research in a string of beach towns and rural inland communities along a stretch west and south of Tallahassee known as the Forgotten Coast, I directly observed nonprofits relying upon donated funds, supplies and labor to meet housing and other needs not being met by flood insurance or government funding.

Everyone my students and I spoke with relayed multiple stories of how neighbors helped one another and how this generosity made the disaster recovery quicker and more bearable.

Being Generous After Disasters

The aftermath of Hurricane Michael shows how when public attention outside the region experiencing a disaster is minimal, it can lead to lower levels of donations.

As a result, I’ve seen people in the region feel overlooked and forced to rely on themselves. Fortunately, the post-disaster generosity of residents, neighbors and friends was more extensive than is immediately visible. Still, the region faces a long struggle to full recovery and cannot be certain the resources available with be enough.

From this example, I have two main suggestions for those wishing to help support survivors of disasters reevaluate how they choose to respond.

First, consider helping after overlooked disasters. That includes the ones that don’t draw saturation media coverage, and those that occur on the heels of other tragedies that ushered in big donation drives. That’s what happened with Hurricane Maria, which crashed into Puerto Rico within a few weeks after Harvey and Irma.

Second, consider waiting before you give, or repeating your gift later. Try donating six months, a year or even two years after a disaster rather than right away because the need will continue for a long time. Not rushing also makes it easier to identify the best nonprofits to support.

Making choices like these may bring hope and assistance to communities seeing too little of both.

David Berlan is an assistant professor of public administration at the Askew School of Public Administration and Policy, Florida State University.
Disclosure statement: David Berlan does not work for, consult, own shares in or receive funding from any company or organization that would benefit from this article, and has disclosed no relevant affiliations beyond his academic appointment.