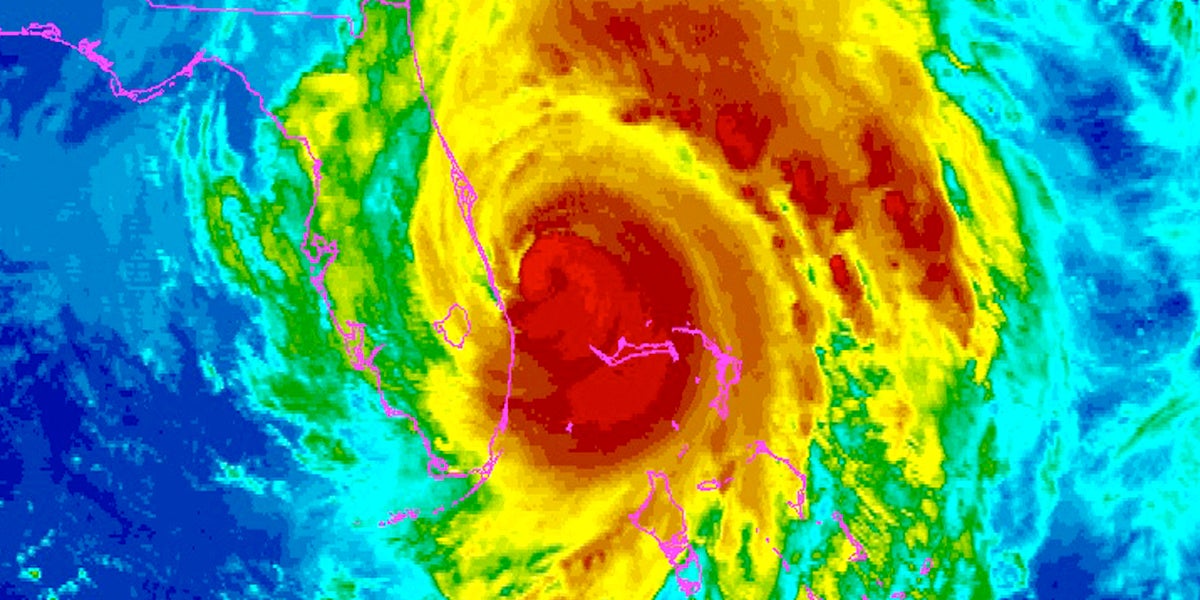 After barreling across the Caribbean and through the Bahamas, Hurricane Matthew backed off from an immediate U.S. landfall on Thursday night, and odds were rising that the system might not come fully ashore before looping out to sea over the weekend. In its 11 p.m. EDT advisory, the National Hurricane Center kept Matthew’s top sustained winds at 130 mph, making it a minimal Category 4 storm.

Hurricane Hunters found that Matthew’s central pressure had dropped to 937 millibars on Wednesday night. Together with radiometer-derived surface winds of 125 mph, it was clear that Matthew remained a potent hurricane, despite its somewhat disheveled appearance on satellite. At 2 a.m. EDT Friday, NHC downgraded Matthew to a Category 3 storm, with top sustained winds of 120 mph. 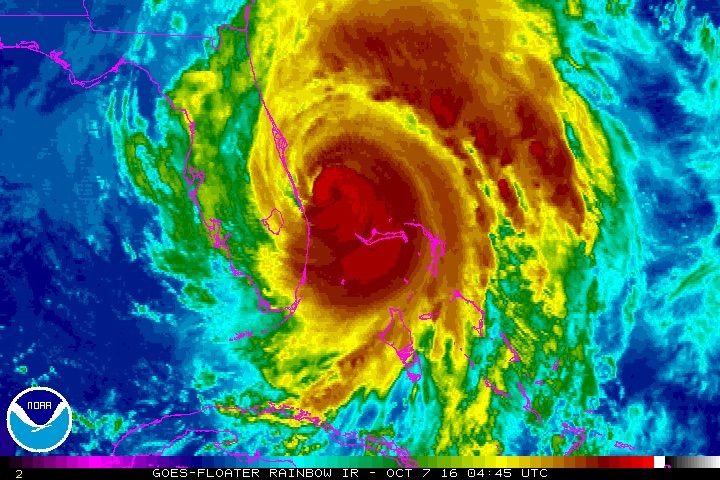 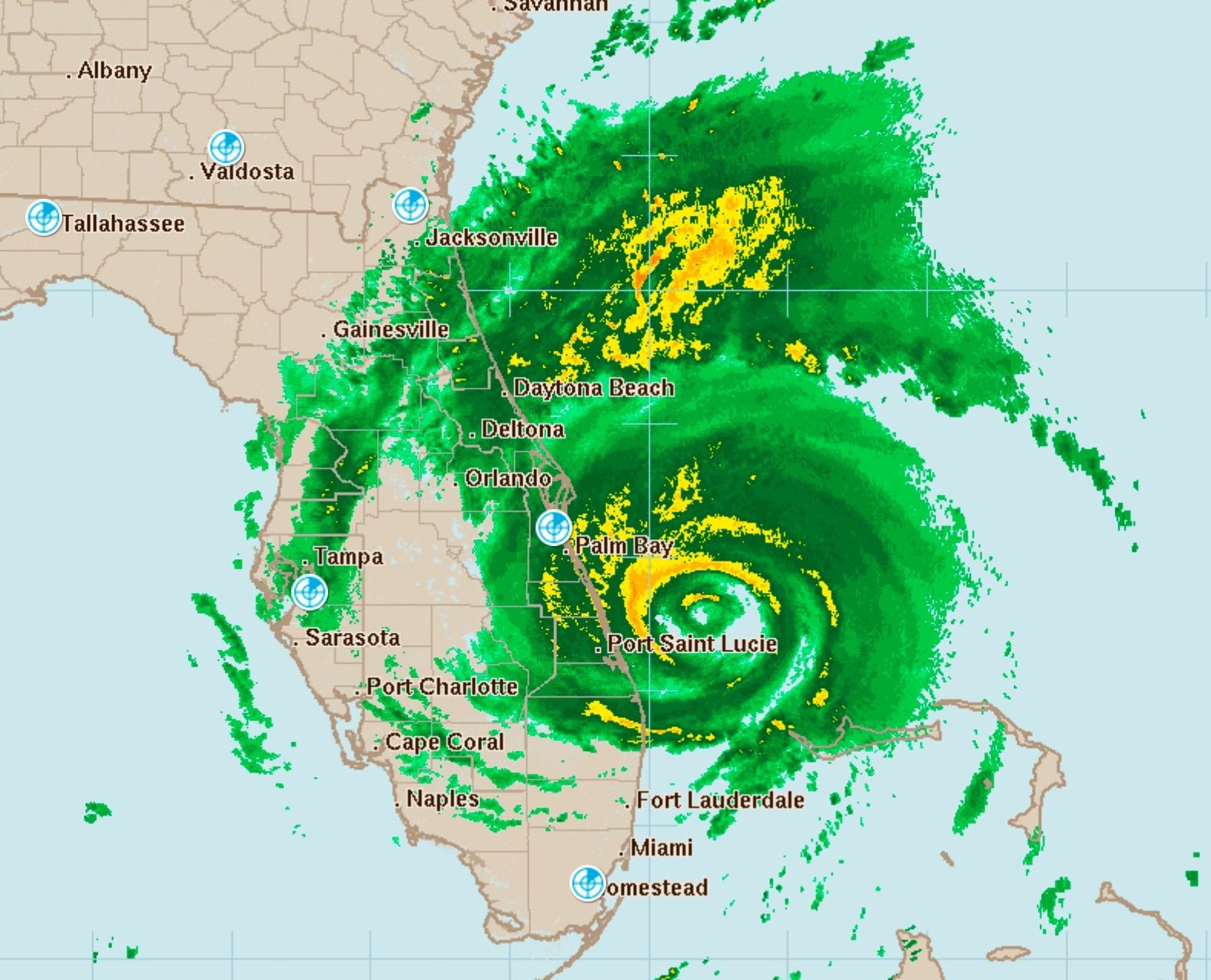 Over the course of Thursday afternoon and evening, Matthew ended up with dual, concentric eyewalls—an outer one, about 10 miles wide, and an inner one, about 70 miles wide, where the strongest winds were focused. The development of dual eyewalls often heralds an eyewall replacement cycle (ERC), in which the inner eyewall collapses and the outer one gradually contracts. Matthew appeared ripe for an ERC on Thursday evening, and that process appeared to be underway late Thursday night, as a reconnaissance summary at 12:15 a.m. EDT Friday reported a single closed eyewall, about 55 miles wide. 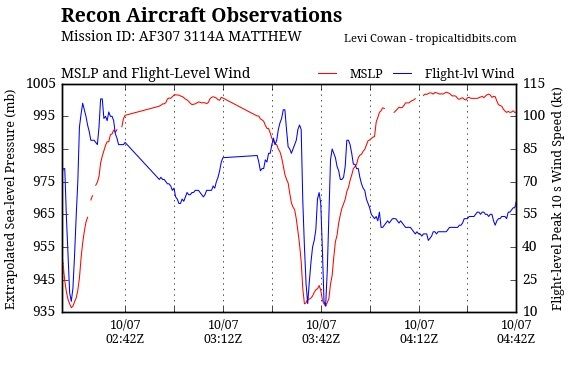 Figure 3. Observations gathered by a Hurricane Hunter flight through Matthew Wednesday night into early Thursday. The emergence of a single large eyewall can be seen in the extended period between wind peaks (blue trace) at around 0342Z (11:42 p.m. EDT Wednesday).tropicaltidbits.com 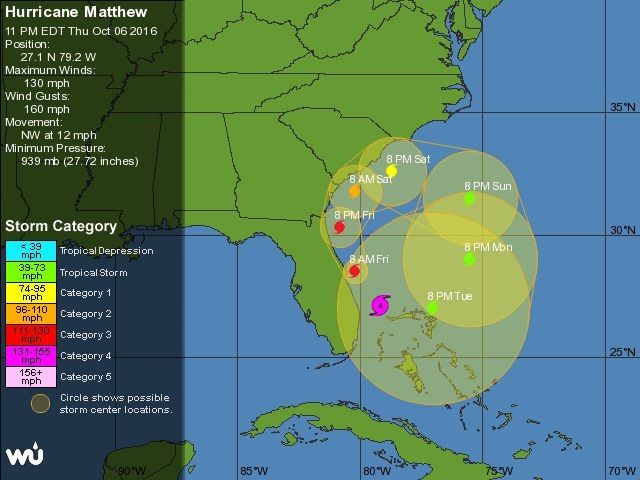 Figure 4. Official NHC forecast for Matthew as of 11 pm EDT Thursday, Oct. 6. The unusual look of the “cone” is because of the nearly complete loop that Matthew is predicted to carve out in the next five days.

A coast-scraping track that could still cause major trouble

What was always recognized as a possibility—that Matthew would never quite make landfall on the Florida coast—emerged as the most likely outcome on Thursday night, as reflected in the 11 p.m. NHC outlook (see Figure 4 above). Matthew’s track out of the Bahamas was angled just far enough north of northwest to keep the center rolling more or less parallel to the Florida coast. Provided that Matthew carries out the gradual curve to the right expected late Friday through Saturday, its center will likely remain between about 20 and 50 miles off the coast, perhaps all the way to Charleston, South Carolina, by Saturday night.

This path would be enough to keep Matthew’s inner core and its top sustained winds offshore, which is very good news in terms of limiting the most severe wind damage. On the down side, Matthew’s outer eyewall—which will likely be packing streaks of 60 to 90 mph sustained winds—will probably edge onto or just inland from the coast early Friday. If Matthew’s center remains offshore as the hurricane churns north and northeast toward Georgia, then its outer eyewall may be slower to weaken. People along the Florida coast from around Melbourne northward can expect several hours of high wind on Friday, fierce enough at times to topple trees and power lines. If not catastrophic (thankfully!), such damage may end up being far more widespread on this type of coast-scraping path than it would have been with a hurricane slamming onshore at a right angle.

Hurricane-force winds are possible as far north as coastal Georgia and southern South Carolina later on Friday, but the primary threat here will be high water—the most deadly aspect of U.S. hurricanes. Because of the gradual expansion of Matthew’s wind field, its direction of motion, and the largely concave geometry of the coastline, barrier islands and inlets from north FL to southern SC remain at risk of major storm surge even if Matthew remains offshore. Late Thursday night, NHC was projecting the potential for coastal inundations of 7 to 11 feet from Sebastian Inlet, Florida, to Edisto Beach, South Carolina, including parts of the St. Johns River between the coast and Jacksonville. Breaking waves of up to 20 – 25 feet are possible atop the coastal surge.

Time and again in recent years, we’ve seen hurricanes weaken in terms of peak winds as they approach the coast, yet push far more water onshore than residents expected. This is one reason why the Saffir-Simpson scale no longer directly relates its strength categories to storm surge: peak winds near the center are an unreliable index to how much surge a hurricane may actually produce. Even if Matthew weakens and stays offshore as projected, surge levels in some areas (especially far north Florida and Georgia) may be the highest observed in many decades, and I fear that many coastal residents will underestimate this risk. 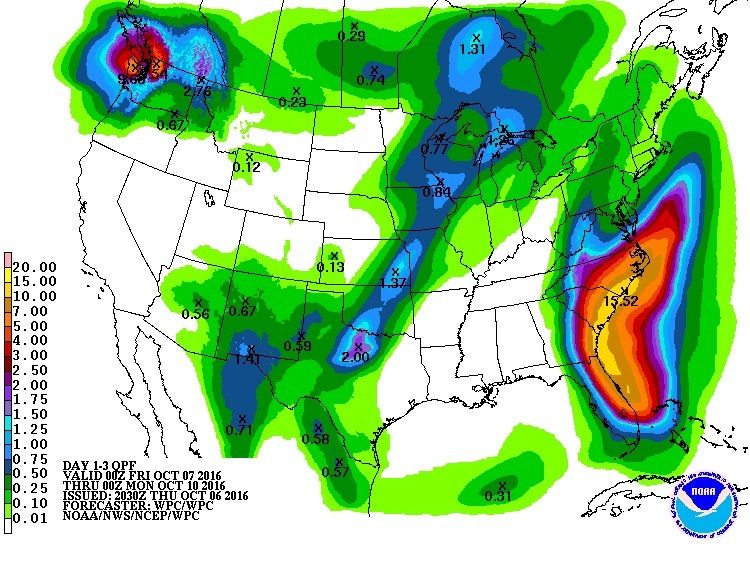 Very heavy rainfall is the other water-related threat that still looms large with Matthew. Widespread totals in the 10″ to 15″ range are projected to fall within about 50 miles of the coast from far north Florida to southeast North Carolina (see Figure 5). The southeast half of the Carolinas can expect 3″ to 10″ amounts. This may be enough to cause extensive flooding, especially where 10″ – 15″ of rain has fallen in the last three weeks. With winds potentially gusting to 40 – 50 mph, we can expect extensive tree loss and power outages.

If Matthew fails to make landfall on Friday, or if it does come ashore below Category 3 strength, the remarkable and unprecedented U.S. “drought” in major hurricane landfalls will continue. The last hurricane to strike the U.S. with Category 3 winds was Wilma, in October 2005—nearly 11 years ago.

Long-range models agree in turning Matthew gradually seaward from the Carolinas over the weekend, and it now appears that the wacky loop-de-loop solution presented by the models a couple of days ago will materialize, at least in some form or fashion. The path shown in Figure 3 above is one of the most precise and elegant circles I’ve ever seen in a five-day NHC forecast. By Tuesday, Matthew is predicted to be heading southwestward, back into the northern Bahamas. Matthew will almost certainly be a far weaker system by this point—most likely a tropical storm. It’s certainly possible that Matthew will end up crossing Florida at some point next week. 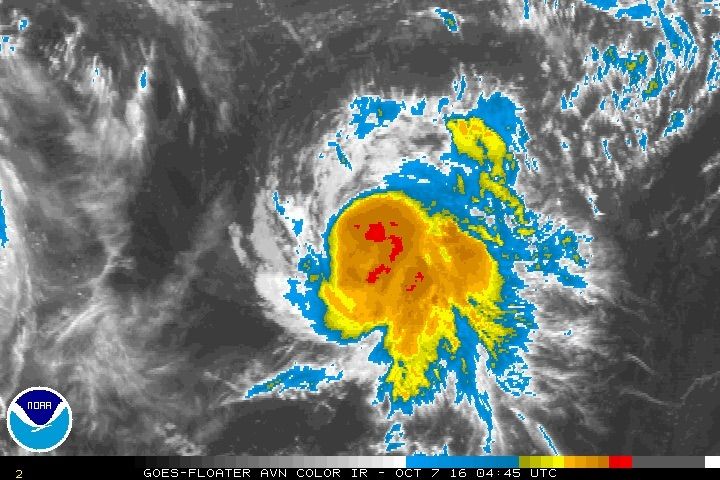 Nicole is now a Category 2 hurricane

Quietly gathering strength while Matthew hogged the spotlight, Hurricane Nicole has become a respectable storm in its own right. Nicole’s top sustained winds were bumped up to 105 mph at 11 p.m. EDT Wednesday, making it a strong Category 2 hurricane. Located about 340 miles south of Bermuda, Nicole was stationary, embedded in weak steering currents and in no hurry to head anywhere. Matthew may draw close enough to Nicole early next week to bring the Fujiwhara effect into play, which would tend to push Nicole to the north and Matthew toward the south—consistent with the motions now expected for both systems, although larger-scale steering will probably be the main factor at work.

NHC’s Eric Blake provided an interesting climatological tidbit in his Thursday night discussion on Nicole: “This is the first time since September 10, 1964 that two Category 2 (or stronger) hurricanes have occurred simultaneously in the Atlantic basin west of 65W. Interestingly, those hurricanes in 1964, Dora and Ethel, were in similar positions as Matthew and Nicole are now.”