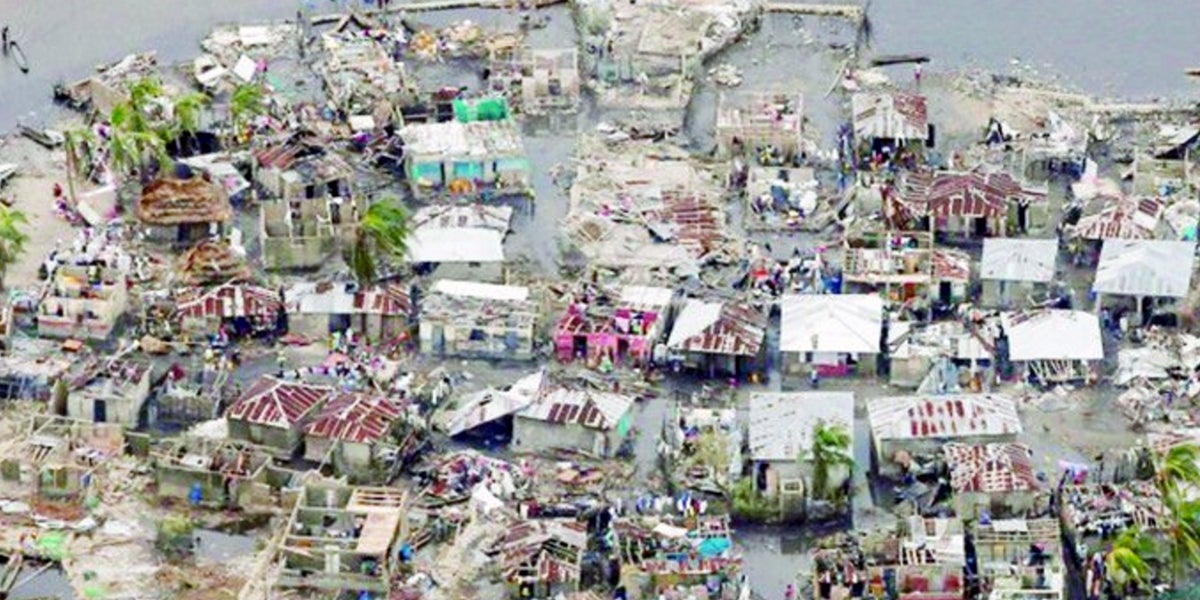 By Jeff Masters and Bob Henson

After a devastating 12-day rampage from the Caribbean to the U.S. Mid-Atlantic, Hurricane Matthew was reclassified as a post-tropical cyclone at 5 a.m. EDT Sunday by the National Hurricane Center (NHC). Matthew wasn’t exactly slacking off—its top sustained winds remained 75 mph as of NHC’s 2 p.m. Sunday advisory—but it no longer had the warm core required for tropical-cyclone status. At 2 p.m. EDT, Matthew was located about 150 miles east of Cape Hatteras, North Carolina, moving east at 15 mph. After days of computer models suggesting a potential loop back toward Florida, it now appears Matthew will continue eastward and gradually dissipate. 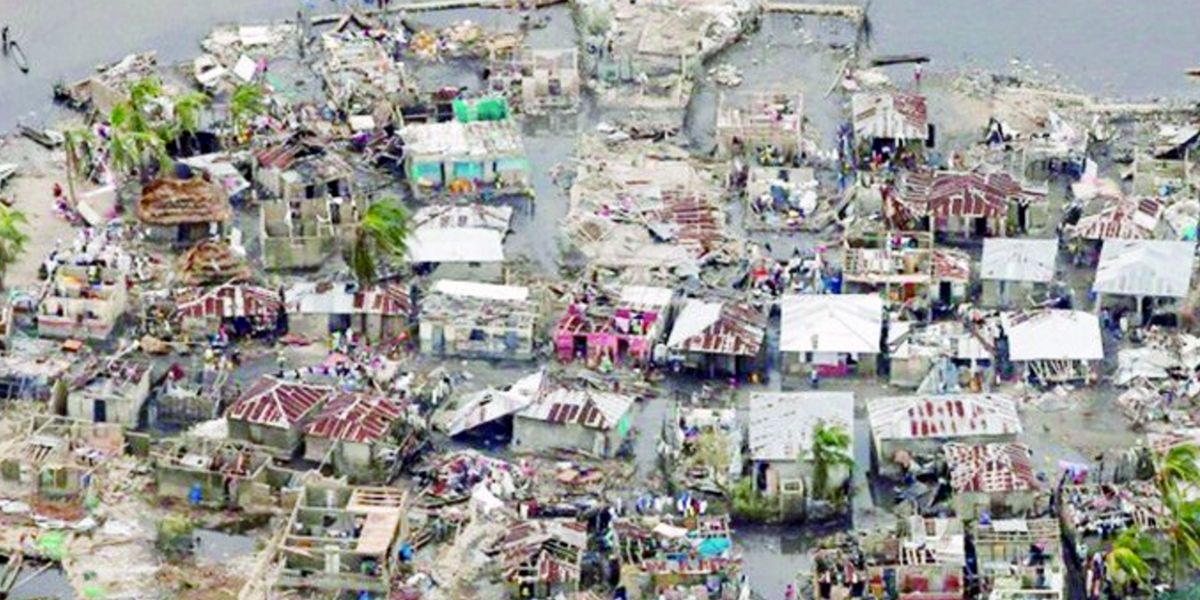 It will be some time before we have a more complete sense of Matthew’s toll, but we already know that it is the deadliest hurricane in the Western Hemisphere since 2005. In Haiti, Matthew took at least 1,000 lives and left entire towns across southern Haiti almost completely destroyed. A handful of deaths and significant damage were also reported in Cuba, Jamaica, The Bahamas, Colombia, Saint Vincent and the Grenadines, and the Dominican Republic. After Haiti, it was the U.S. that took the worst of Matthew’s wrath. At least 17 U.S. deaths have been reported and insured damage is expected to total at least $4 billion. See our Saturday post for details on how you can provide much-needed help to those struggling with the aftermath of Matthew.

From Florida to Virginia, Astounding Rains and Storm Surge

Matthew traced a path remarkably similar to the coastline of the Southeast U.S. Although its center stayed within about 50 miles of the coast for more than 36 hours and hundreds of miles, Matthew officially came ashore only briefly as a Category 1 hurricane along the South Carolina and North Carolina coast on Saturday afternoon. Matthew’s overall path kept its strongest winds just offshore, with few or no reports of sustained hurricane-force winds along the Southeast U.S. coast. Top wind gusts compiled by weather.com included 107 mph at Cape Canaveral, Florida (collected on a tower 54 feet above ground level) and 96 mph at Tybee Island, Georgia.

Matthew’s just-offshore track may have spared the Southeast from billions of dollars in wind damage, but it didn’t keep the hurricane from packing a phenomenal punch in the form of water. Like several other U.S. hurricanes in the last decade, including Ike (2008) and Sandy (2012), Matthew delivered a much more severe storm surge than one might expect from its landfall strength, thanks to the water built up by much higher winds earlier in its life offshore. Matthew’s track along the concave Southeast coast also enhanced its ability to produce high surge. Major storm surge was reported as far north as the Hampton Roads area of southeast Virginia, which received an unexpectedly powerful blow from Matthew that also included tropical-storm-strength sustained winds (including a peak gust of 75 mph at Oceana Naval Air Station in Virginia Beach) and torrential rain.

1.4 million people in the southeast are without power as Hurricane Matthew makes landfall in South Carolinahttps://t.co/sVGiEdeb7y pic.twitter.com/yaslYkHgyF

As of 8 a.m. EDT Sunday, Oct. 9, here are the approximate peak storm surges observed over the preceding 48 hours at all the tide gauges with a long-term period of record (at least a few decades) along the coasts of northern Florida, Georgia, South Carolina, North Carolina and Virginia. (Storm surge is the added water produced by a storm atop the normal tidal cycles).

Three tide gauges with long-term historical records along this stretch of coast set all-time records on Friday through Sunday for their highest water level (also called the storm tide or the water level measured relative to high tide, MHHW):

Near-record high water levels were observed at three other stations:

At Springmaid Pier, South Carolina the water level during Saturday afternoon’s high tide was the second highest on record: 2.66′. The record 3.65′, during the Jan. 1, 1987 nor’easter (records since 1957). 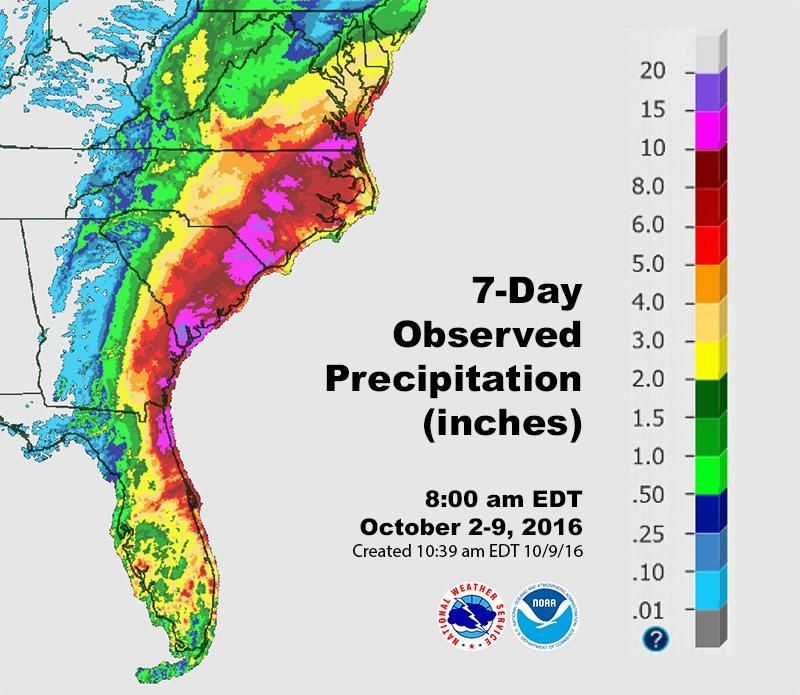 Multi-sensor analysis of precipitation for the 7-day period from 8:00 a.m. EDT Sunday, Oct. 2, to Sunday, Oct. 9. Nearly all of the precipitation shown across the Southeast fell during Hurricane Matthew. NOAA / NWS Advanced Hydrologic Prediction Service

Forecasters knew for days that extremely heavy rain was likely to develop on the north side of Matthew as it moved up the Southeast coast. As hurricanes move into the midlatitudes, they often interact with pre-existing frontal systems that intensify the rain-making processes on the poleward side of the storm. Matthew ended up generating torrential rain near the Southeast coast, as predicted, but it also produced record-smashing rainfall well inland and considerably further north than expected, especially over North Carolina and southeast Virginia. More than 880 rescues had taken place across North Carolina as of Sunday morning, according to Gov. Pat McCrory.

Here are the highest storm totals observed in each state along Matthew’s path as of 11 a.m. EDT Sunday:

From Friday into Saturday, Savannah International Airport broke the city’s official 24-hour rainfall record of 11.44″ on Sept. 17-18, 1928, according to Weather Underground weather historian Christopher Burt. It’s quite possible that an even higher 24-hour reading will be confirmed from one of the other Savannah-area reporting stations, as suggested by the storm total above.

Norfolk, Virginia, received 7.44″ of rain on Saturday, making it the city’s wettest October day on record (beating 6.23″ from Oct. 17, 1999). Little more than three months ago, Norfolk set its all-time July calendar-day rainfall record with 6.98″ on the 31st.

Perhaps the single most phenomenal record on Saturday was at Fayetteville, North Carolina, where 14.00″ of rain was reported on Saturday. This demolished the city’s previous all-time calendar-day record of 6.80″ observed during Hurricane Floyd on Sept. 16, 1999. In fact, there are only four entire months in Fayetteville weather history that have received more rain than Fayetteville picked up in 24 hours on Saturday! Fayetteville records extend back to 1871. The flooding situation in the Fayetteville area was made even worse by very heavy rains observed in parts of the area during late September.

Several locations along Matthew’s path through the Southeast recorded incredibly high amounts of atmospheric moisture on Friday and Saturday. At least two sites had record amounts of precipitable water (the total amount of liquid water that would cover the ground over a given location if all the moisture in a column of air above was condensed). These readings are taken with radiosonde soundings (balloon-borne instrument packages) that have been conducted regularly since 1948.

Dr. Phil Klotzbach (Colorado State University) has assembled a handy list of the many records set during Matthew’s long life. Here are a few highlights:

Intensity: Matthew was the lowest-latitude Category 5 hurricane on record in the Atlantic. Its strengthening of 80 mph in just 24 hours was the third fastest on record for the Atlantic, behind only Wilma (2005) and Felix (2007).

Longevity: Matthew maintained Category 4 or 5 strength for 102 hours, the longest such stretch on record for October in the Atlantic. Its 7.25 days as a major storm (Category 3 or stronger) is the fifth longest such period for any hurricane since satellite observations began in the Atlantic in 1966.

Landfall: Matthew is the first storm on record to make landfall as a major hurricane in Haiti, Cuba and the Bahamas. Since 1866, the only two hurricanes to strike the Bahamas at Category 4 strength in October are Matthew and last year’s Joaquin. Matthew’s landfall near Myrtle Beach made it the first hurricane to strike the U.S. Atlantic coast north of Georgia in October since Hazel (1954). 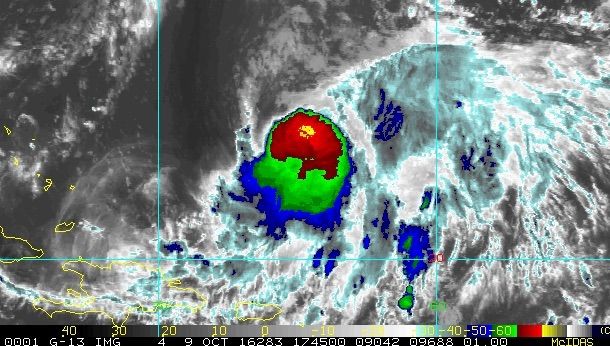 A New Lease on Life for Nicole

Tropical Storm Nicole continues to languish in the open Atlantic. As of 11 a.m. EDT Sunday, Nicole was nearly stationary, spinning about 575 miles south of Bermuda with top sustained winds of around 60 mph. As a blocking ridge to its north moves eastward, Nicole should begin moving north an at increasing rate over the next couple of days. By midweek, it will be over the record-warm waters of the subtropical North Atlantic, which helped boost Hurricane Gaston to Category 3 strength at latitude 30°N in late August. With wind shear over Nicole decreasing by midweek, the storm may a chance to regain much of the strength it had on Friday. The 12Z Sunday run of the HWRF, one of our best intensity models, brings Nicole back to Category 2 strength by late this week. Our best track models (the GFS, ECMWF and UKMET) differ on whether Nicole will pass to the west or the east of Bermuda around Thursday. Given this uncertainty, as well as Nicole’s potential to intensify, Bermudians should monitor this storm closely.