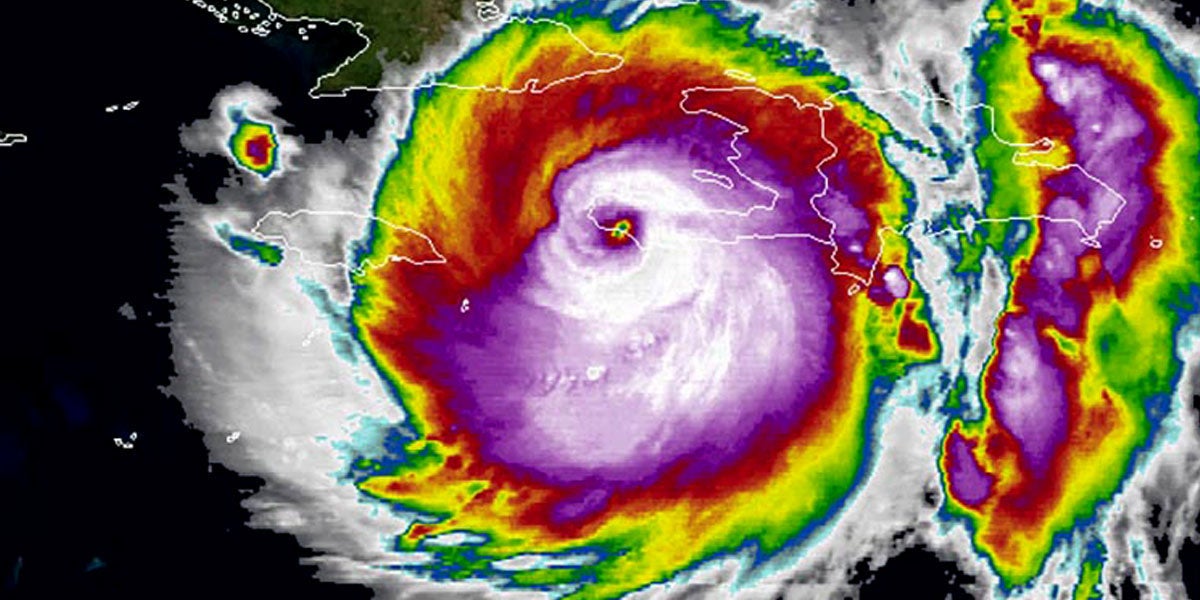 Powerful Hurricane Matthew made landfall on the southwestern tip of Haiti near 7 a.m. EDT Tuesday as a Category 4 storm with 145 mph winds. Matthew’s extreme rains, large storm surge and Category 4 winds are likely to be catastrophic for Haiti. 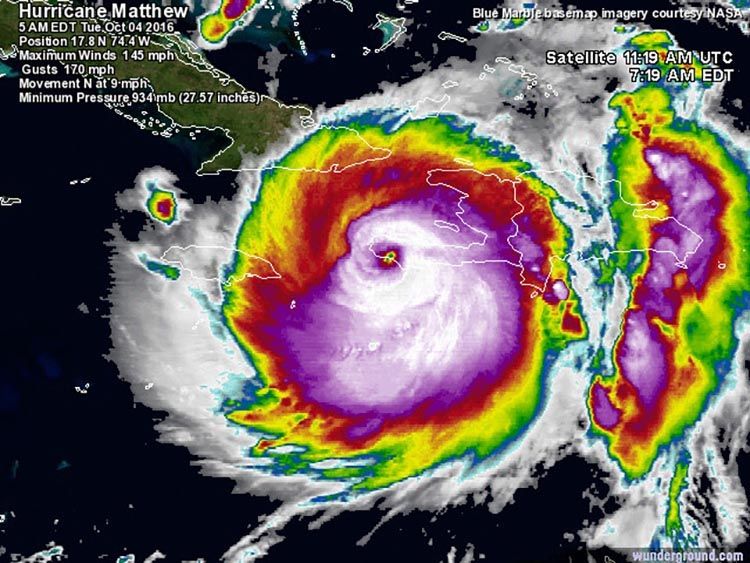 Figure 1. Infrared satellite image of Hurricane Matthew as it made landfall over the southwestern tip of Haiti at 7:19 am EDT Oct. 4, 2016.wunderground.com

The hurricane is the third strongest one ever recorded in the impoverished nation, and their strongest hurricane in 52 years. The only Haitian hurricanes stronger than Matthew were two Category 4 storms with 150 mph winds: Hurricane Cleo of 1964 and Hurricane Flora of 1963. The last major hurricane to make a direct hit in Haiti was Category 3 Hurricane David of 1979, which crossed over the nation from east to west with 115 mph winds.

We don’t have many weather stations in Haiti, so it is difficult to say what the conditions are on the ground. A personal weather station (PWS) on the south coast Haiti at Aquin, about 70 miles east of Matthew’s landfall, recorded a wind gust of 59 mph at 6:50 a.m. EDT Tuesday. A PWS near Port-Au-Prince, Haiti recorded about 1.70″ of rain during the 36-hour period ending at 7 a.m. EDT Tuesday. At the Port-Au-Prince airport, top winds on Tuesday as of 8 a.m. EDT were 34 mph, gusting to 52 mph.

An Air Force hurricane hunter aircraft arrived at Matthew’s center near 8 a.m. EDT Tuesday, when the eye was over land. The plane did not fly directly into the center of the eye, since that would have risked penetrating through extreme turbulence over land, but the aircraft was able to measure a central pressure of 944 mb at the edge of the eye. The peak winds measured by their SFMR instrument were 135 mph, so Matthew was definitely a solid Category 4 storm at landfall.

Satellite loops on Tuesday morning showed that the encounter with land had weakened the storm, with the eye much less distinct. Light wind shear of 5 – 10 knots is affecting the storm, and Matthew is over warm ocean waters of 29°C (84°F) and has plenty of moisture to work with—70 – 75 percent relative humidity at mid-levels of the atmosphere, as analyzed by the SHIPS model. 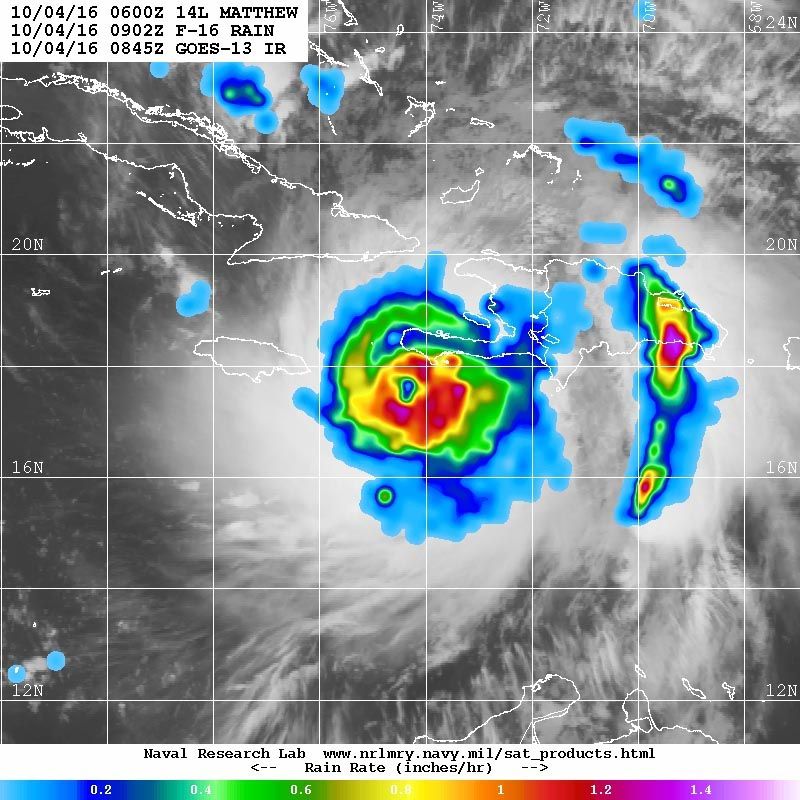 Figure 2. Microwave image of rainfall rates in Hurricane Matthew from the F-16 polar orbiting satellite taken at 5:02 a.m. EDT Oct. 4, 2016. At the time, Matthew was a Category 4 storm with 145 mph winds. Rainfall amounts in excess of 1″/hour (orange colors) were occurring along the coasts of Haiti and the Dominican Republic.

Extreme rains from Matthew are a huge concern for the entire island of Hispaniola, thanks to an unusual area of extra spin and low pressure that has been embedded on the east side of Matthew’s circulation for days. This feature began rotating ashore over southern Haiti and the Dominican Republic early Monday morning, and continues to affect the Dominican Republic this morning. The mountainous terrain of the island has caused tremendous uplift to the thunderstorms moving ashore, resulting in extremely intense rainfall. A personal weather station (PWS) in Cabo Rojo, on the southern coast of the Dominican Republic near the border with Haiti, recorded 22.89″ of rain on Monday, including a remarkable 5.33″ in the hour from 6 to 7 a.m. An additional 3.73″ fell on Tuesday as of 8 a.m. EDT, for a storm total of 26.62″. While PWS data is often suspect, these are believable rainfall amounts based on the satellite presentation of Matthew.

Landfall in Haiti on Tuesday morning and on eastern Cuba on Tuesday evening will disrupt the hurricane, and could cause it to weaken by one Saffir-Simpson category, to a Category 3 storm. However, Matthew is a very large and well-organized storm, and it may take it only a day to recover from its disruption. The latest SHIPS model forecast predicts that wind shear will remain light to moderate, 5 – 15 knots, through Friday. Ocean temperatures will be very warm, between 29 – 30° C (84 – 86°F) and the heat content of the ocean will be high to very high, which argues for intensification of Matthew. Our top three intensity models—the HWRF, LGEM, and SHIPS models—were predicting on Tuesday morning that Matthew would be at Category 3 or 4 strength through Friday.

The significant westward shift in computer model guidance on Hurricane Matthew that occurred yesterday is holding, and we now have increased confidence that Matthew will bring severe impacts to the Southeast U.S. coast from South Florida to Cape Hatteras, North Carolina.

Matthew will continue northwards after clearing the southwest tip of Haiti Tuesday morning, then make a second landfall in eastern Cuba at about 6 pm EDT Tuesday. Matthew will turn north-northwest and then northwest on Wednesday, and traverse The Bahamas from southeast to northwest Wednesday morning through Thursday morning. In their 5 a.m. EDT Tuesday Wind Probability Forecast, NHC gave highest odds of hurricane-force winds in The Bahamas to Great Exuma (57 percent), New Providence (46 percent), and Grand Bahama (37 percent).

Late Thursday morning, Matthew will be very close to the coast of South Florida, and is expected to turn more to the north-northwest, almost parallel to the coast, at that time. The latest 00Z and 06Z Tuesday runs of our top two models for predicting hurricane tracks—the GFS and European models—did not show a Florida landfall, but brought the hurricane so close to Florida—within 50 miles—that most of the coast of Florida from West Palm Beach to Daytona Beach would experience sustained winds of at least 50 mph, if these forecasts verified. Keep in mind that the diameter of NHC’s cone of uncertainty two days into the future is about 100 miles; the cone is about 130 miles across three days into the future. On average, about two-thirds of all hurricanes stay within the cone, but some hurricanes are tougher to predict than others, and Matthew certainly falls into that category. Thus, it would not be a surprise to see Matthew make landfall in Florida.

Two of the four members of the Euro “high-probability” cluster—the ensemble forecasts that most closely match the operational run—depicted Matthew making landfall on Florida’s East Coast near West Palm Beach on Thursday. In their 5 a.m. EDT Tuesday Wind Probability Forecast, NHC gave highest odds of hurricane-force winds in Florida to Ft. Pierce (22 percent), West Palm Beach (21 percent), and Cocoa Beach (19 percent). Update: At 11 a.m. EDT Tuesday, NHC placed the Florida coast from Deerfield Beach to the Volusia/Brevard county line under a Hurricane Watch, with a Tropical Storm Watch in effect southward from south of Deerfield Beach to the Seven Mile Bridge in the Florida Keys, including Lake Okeechobee. 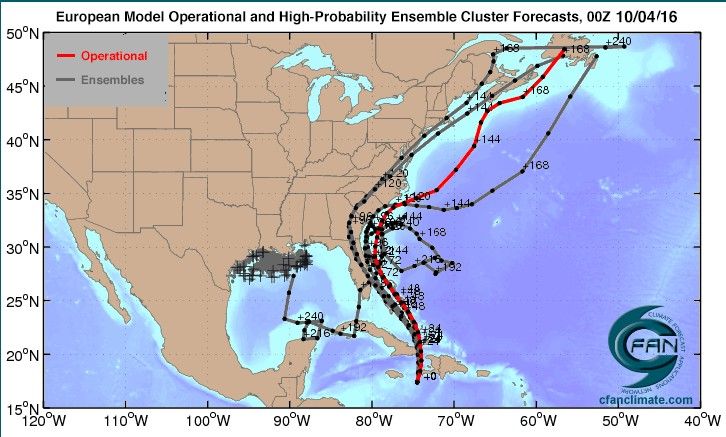 Figure 3. Track forecasts from the four European model ensemble members [gray lines] that most closely match the operational run [red line] during the first 72 hours, starting at 00Z Tuesday, Oct. 4, 2016. The red line is a version of the 00Z Tuesday operational model track that has been adjusted and calibrated using a proprietary technique to account for systemic model errors, and shows Matthew barely missing landfall along the Southeast U.S. coast. All four of the ensemble forecasts showed Matthew making landfall in the U.S., in Florida or South Carolina (though one looked like an improbable outlier, with a looping track off the coast.) The high-probability cluster (grey lines) perform better than other ensemble members at forecast times of five days and beyond.

After its closest approach to the coast of North Carolina, we have a number of reliable models predicting that Matthew will continue north-northeast and hit New England on Sunday, with eastern Massachusetts being at greatest risk. Landfall in New England would very likely not be at hurricane strength, due to the potential for Matthew to pass over a lot of land before getting there. The risk to New England is not clear at this point, though, since we have some model guidance predicting a more northeasterly path for Matthew, keeping the center of the storm several hundred miles east off the Northeast U.S. coast.

Reposted with permission from our media associate WunderBlog.