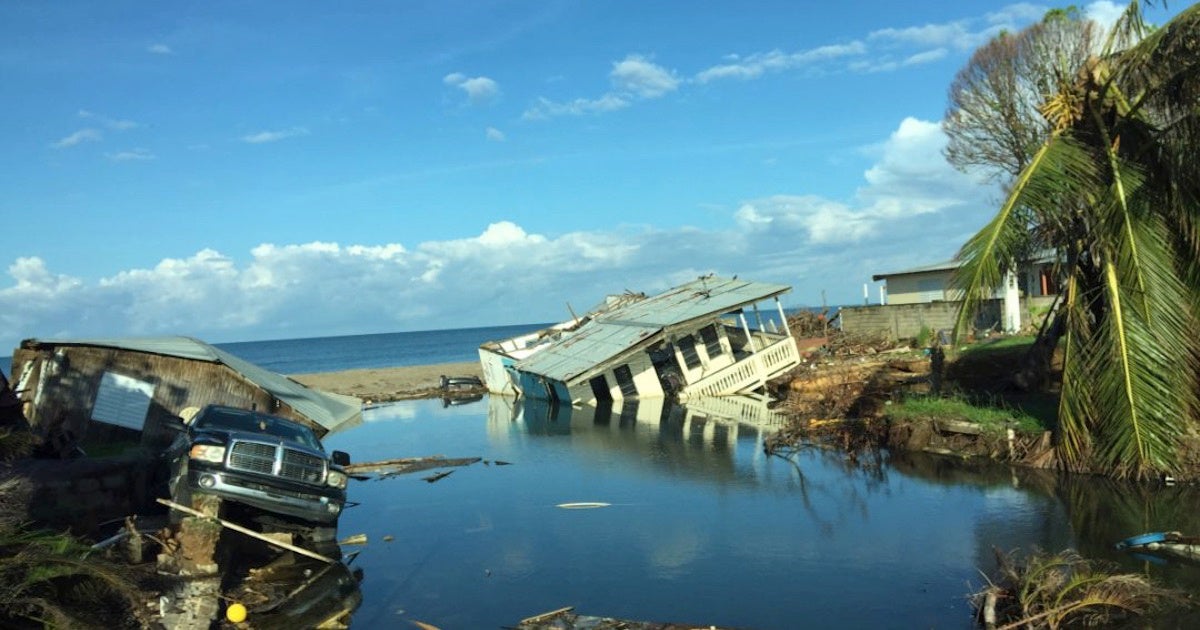 I’m so happy to be able to communicate with you again. As many of you know, I live in western Puerto Rico. In this post I want to tell you a little about my family’s experience with Maria, and how you can help Puerto Rico.

On Thursday Sept. 21, when the sun came up, I looked out our front door at a wintery landscape. There was not one leaf on one tree in all the tropical forest that surrounds our property. Instead, the walls of my house were plastered with one-inch-by-one-inch pieces of leaves. It was as if they had been stripped off the trees, chopped in a food processor, and coated onto our house with a pressure washer.

I could see houses that I’ve never seen before, exposed by the now leafless landscape. Whole neighborhoods were laid bare. Two of our neighbors had lost their roofs. The creek that we cross daily was flowing over its little bridge (which we could now clearly see through the bare trees). The Añasco River valley, usually green, was a gigantic, shining lake.

Our house had about ¼” of water in every room. It had squirted in through previously invisible crevices in the tightly shut aluminum windows. At the beginning of the storm we naively tried to put towels on the windowsills, but keeping water out became a hopeless task.

So that first day we just pushed out water, mopped the floors. It took all day, and part of the next day. We kept waiting for our cell signal to return, turning on and off the phone. Again, in retrospect, naïve. It would be two weeks before we could make a call from our phones.

On Friday Sept. 22, my husband decided that the weather was stable enough to inspect our road. It had continued to rain and blow all of Thursday, so it had not been safe to go out before then. He took the kids and the dog with him. When they got back he announced that there were so many huge trees down over the road that it we would be lucky to get out in a week.

He was right. Every day for a week he went out with my son and they cut trees, my husband with the chainsaw and my seven-year-old son with hedge trimmers.

I emptied boxes from our recent move that had gotten wet in the garage, desperately searching for the one battery-operated radio that I knew we had somewhere. Before I found it we had been listening to the radio in the car, limiting ourselves to ten minutes at a time to not waste the car battery, dying to hear what was going on. We could only get one local radio station, WKJB. They broadcast local news about the storm for 24 hours a day every day.

That radio station was our lifeline, our connection to our community, who was suffering. It was the only way we knew about what was happening to anyone else. We heard the mayors of the western towns report on the operation of the hospitals, accessibility of the roads, tanks of fresh water they were trying to distribute to their people. And it became clear: there was no help from San Juan, no help from Washington. In those first two weeks all the action was local, micro. It was neighbors with machetes, the municipal governments figuring out how to get diesel to the hospitals to power generators, organizing trucks of potable water to provide an oasis for people to come and fill whatever containers they had, if they could.

The problems were, and still are, so, so basic. Get to water and food, if you can pass through the roads blocked by fallen trees, mudslides, and power lines. Have cash to buy things if you can get to them. Find a gas station with gas.

For us, it was like that for the first two weeks. But for many, it’s still like that. On the radio we can sometimes hear the governor, who paints a picture that everything is OK. During the first weeks he would report things like: the national guard delivered diesel to a dialysis center in Cayey. One dialysis center? How many dialysis centers are there in Puerto Rico? There are at least three in my town, and there are 78 towns. Without electricity, those patients die.

And they are dying, their numbers obscured in the debate about how to count deaths attributed to Maria. They are dying, along with patients dependent on oxygen, and refrigerated insulin. Along with a whole family who died of leptospirosis from drinking river water.

The governor says that 95 percent of power will be restored to the island by Christmas. Really? Every single telephone pole is down. Every. One. A transformer blocks the entrance to my old neighborhood; my neighbors drive around it cautiously. People are propping up sagging power lines with stray tree branches. And that’s here, in Mayagüez, where we did not get hit very badly, comparatively.

I can’t watch the U.S. news. I physically can’t—I have no way to—but even as Internet is slowly returning to work this week, I couldn’t bring myself to. Puerto Rico is living through a catastrophe, and the federal government is not exactly showing compassion.

Maria has laid bare an old and enduring chasm between the San Juan metro area and everyone else. They call us “la isla,” as if we don’t also live on the same island as they do. So when San Juan quickly recovered, as all provisions and supplies were funneled to its ports—while the governor called meetings of all the town mayors, making the only leaders helping western Puerto Rico waste the day traveling for hours to San Juan—the image sent by the Puerto Rican central government to everyone else is that since San Juan is OK, all of Puerto Rico is OK.

But we are not OK. There are still over 150 people from rural towns unaccounted for. Almost everyone is without power, even if the water plants are slowly coming online (powered by diesel generators). As we are able to be more mobile, we hear more stories. One of my dearest friends spent 18 hours of the storm floating on an air mattress inside of her living room in five feet of water, before being rescued by good Samaritans on kayaks (read her story here). My husband’s secretary lost everything as the river and ocean united to flood her home. She found fish in her house. My building’s janitor described how the flood waters converted his home into a blender, moving furniture from one room to another. “But I’m not throwing anything away, I’m just drying it out,” he says. “Because I don’t know what FEMA is going to give us.”

We have to find a way to feel stable in instability. The cell signal comes and goes. The power goes out randomly, darkening all the traffic lights during rush hour. The water is unpredictable. The gas station might have gas, it might not.

The fact that within all of this, the only way to apply for FEMA assistance is by phone or Internet is like a sick joke. The people who really need help in Puerto Rico didn’t have Internet or stable phone lines before Maria. And anyway, no one has power. The power lines are on the ground.

If you are looking for a way to help, the best thing that you can do, in my opinion, is to give a cash donation via Paypal to a local organization offering direct help to people who need it. Here is one such group in my community: Brigada Solidaria del Oeste. You can make a donation via PayPal at iser@isercaribe.org (please specify that your donation is for Brigada Solidaria del Oeste).

I’m also holding my own fundraiser by opening a special session of my online course, The Academic Woman’s Writing Roadmap. For each enrollment I’ll donate $50 to direct, local, hurricane relief in the Mayagüez area.

Cathy Mazak is a tenured professor at the University of Puerto Rico, Mayagüez and an academic coach at https://www.cathymazak.com