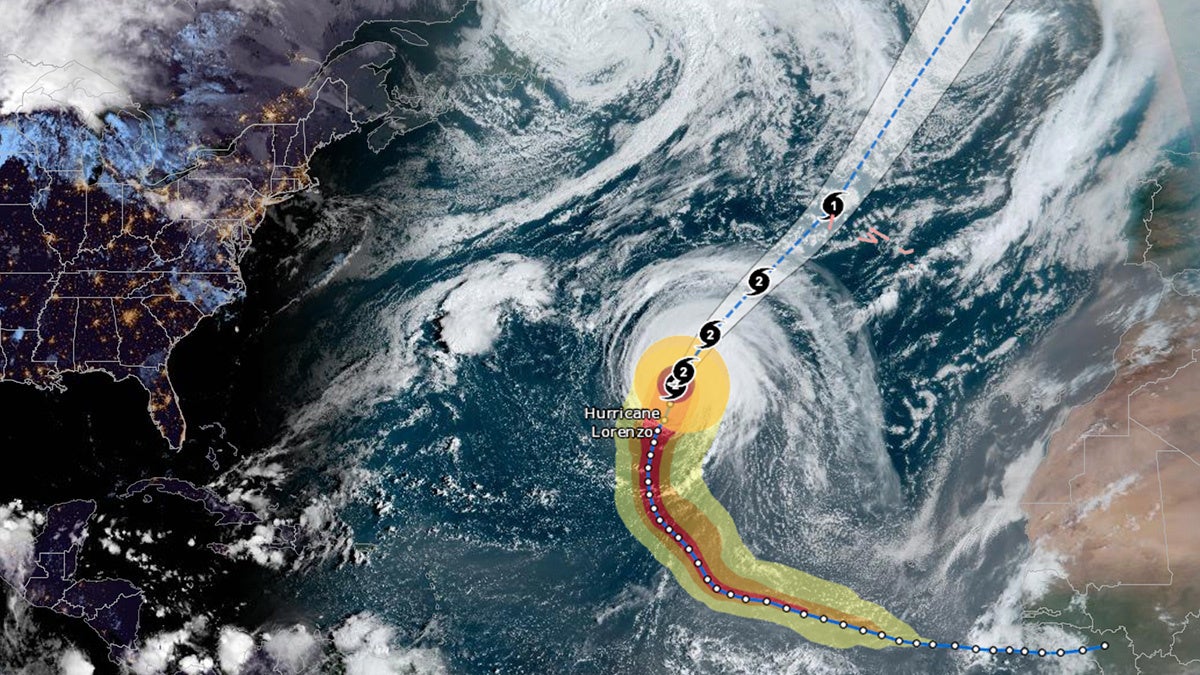 Hurricane Lorenzo strengthened to a Category 5 storm Saturday night, becoming the strongest storm ever recorded so far north and east in the Atlantic, CNN reported.

It has since weakened to a Category 2 storm, but is still expected to be a “large and powerful hurricane” when it passes near the Azores early Wednesday, according to the most recent advisory from the National Hurricane Center (NHC).

The NHC has issued a hurricane watch for the islands of Flores, Corvo, Faial, Pico, São Jorge, Graciosa and Terceira and a tropical storm watch for São Miguel and Santa Maria. The storm is expected to dump two to four inches of rain over the western Azores, which could cause “life-threatening flash flooding,” the NHC warned.

It is unusual for hurricanes to reach the Azores, according to The Weather Channel. Since the mid-nineteenth century, only seven hurricanes Category 2 or higher have blown within 200 nautical miles of the islands. Those include Ophelia in 2017, which knocked down a few trees and caused some flooding when it passed south of the Azores, and a 1926 hurricane that passed over São Miguel.

Lorenzo could also join Ophelia in being the rare former hurricane to impact the UK. Its weakened winds could veer northwest and lash Ireland, CNN meteorologist Haley Brink said.

“Ophelia did the same thing and impacted the region in 2017, bringing with it very strong winds,” Brink told CNN.

While Lorenzo is unusual for its intensity so far east, The Weather Channel noted that it is also part of a growing trend of hurricanes impacting the eastern Atlantic. Hurricane Leslie almost reached Portugal in 2018, and Hurricane Alex hit the Azores with a freak January strike in 2016.

Lorenzo is also part of an overall trend in stronger storms during the past few years. It was the second Category 5 storm in the Atlantic this year, following Dorian, and the sixth in less than three years. Furthermore, it contributed to making Septembers 2017 to 2019 the three busiest on record in terms of accumulated cyclone energy, which measures the strength and duration of tropical storms, NHC scientist Eric Blake tweeted.

“There’s something happening here,” he tweeted.

Part of what’s happening is the climate crisis, as Earther pointed out. A scientific consensus is emerging that global heating is driving wetter, stronger storms that intensify more rapidly.

Lorenzo’s intensification over the weekend was due to warmer than average Atlantic Ocean temperatures, The Washington Post’s Capital Weather Gang explained.

“The water under Lorenzo when it was a Category 5 hurricane is about 28°C (82.4), which is about 1°C (1.8°F) warmer than average … just enough to give it that extra jolt,” Capital Weather Gang’s tropical weather expert Brian McNoldy wrote.