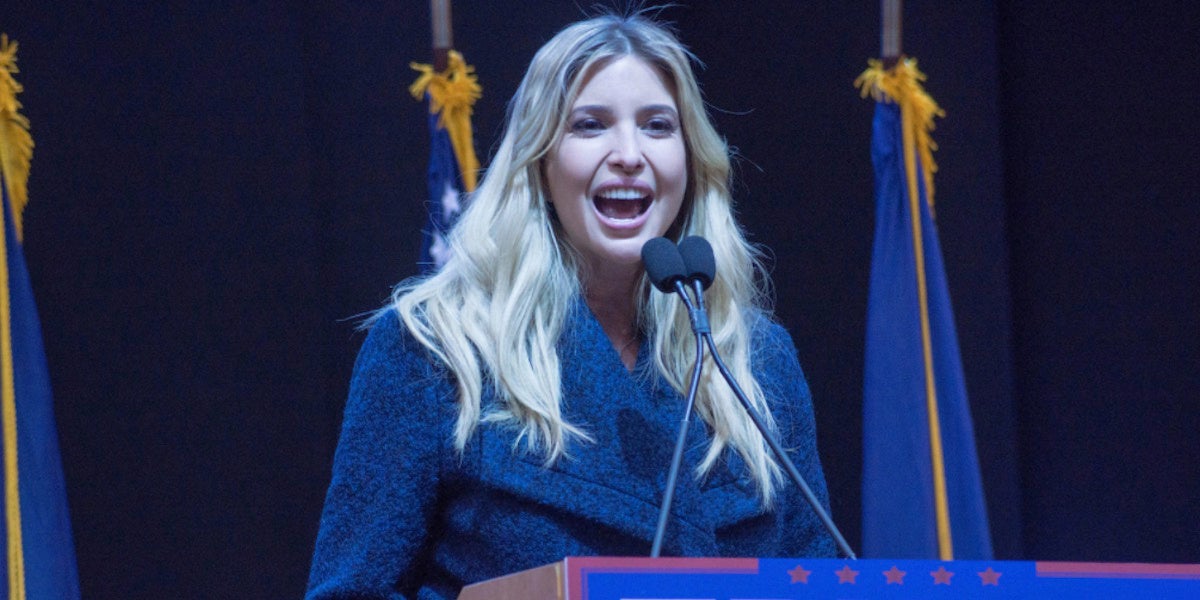 A Care2 petition that surfaced online Wednesday demanding the World Meteorological Association change the name of Hurricane Irma to Hurricane Ivanka is more than halfway towards its 10,000-signature goal.

According to the petition’s letter, President Trump’s eldest daughter, “who promised to try to influence her father on certain issues like climate change, has quietly accepted the administration’s lack of action on this very serious issue.”

The first daughter and White House senior advisor reportedly wanted climate change to be one of her “signature issues,” but has been notably silent as her father continues to roll back critical environmental regulations. Just days before Hurricane Harvey struck, Trump killed an Obama-era rule that required new infrastructure to be built with climate resiliency in mind, specifically flood protection. Ivanka was also said to be in favor of the U.S. remaining in the Paris climate deal but was unable to persuade her father otherwise.

“Ivanka Trump can say what she wants about climate change but as long as she quietly stands back, she remains complicit in the destruction we all face at the hands of her father’s administration,” the letter continues.

“That’s why we’re petitioning the World Meteorological Association to rename Hurricane Irma to Hurricane Ivanka. We need to put pressure on members of Trump’s administration to take real a stand for the health and safety of our world and generations to come.”

So far, nearly 7,000 people from all over the world, from New York to the Netherlands, have added their electronic signatures to the form.

The volume of rainfall from Harvey, which devastated Texas last month, is likely linked to climate change, the World Meteorological Organization said.

Ivanka indeed appears to have moved on from environmental issues as of late. As Elite Daily wrote: “In the past week, she has tweeted twice about Hurricane Harvey—and three times about tax reform. Both of Trump’s Hurricane Harvey tweets are largely indifferent to the suffering happening in Texas, only offering thoughts and prayers; one points her followers to the government website for natural disaster preparedness. But that’s it. No offers to help, no tweets about where to donate or how to help.”

Here are some tweets about Ivanka’s lackluster hurricane response:

Yet not one tweet offering donations to hurricane relief. Not even a mention of thoughts and prayers. @IvankaTrump? https://t.co/R6WETkCiuc

Pretty sure Hurricane Ivanka would have screwed more people over than Hurricane Irma.