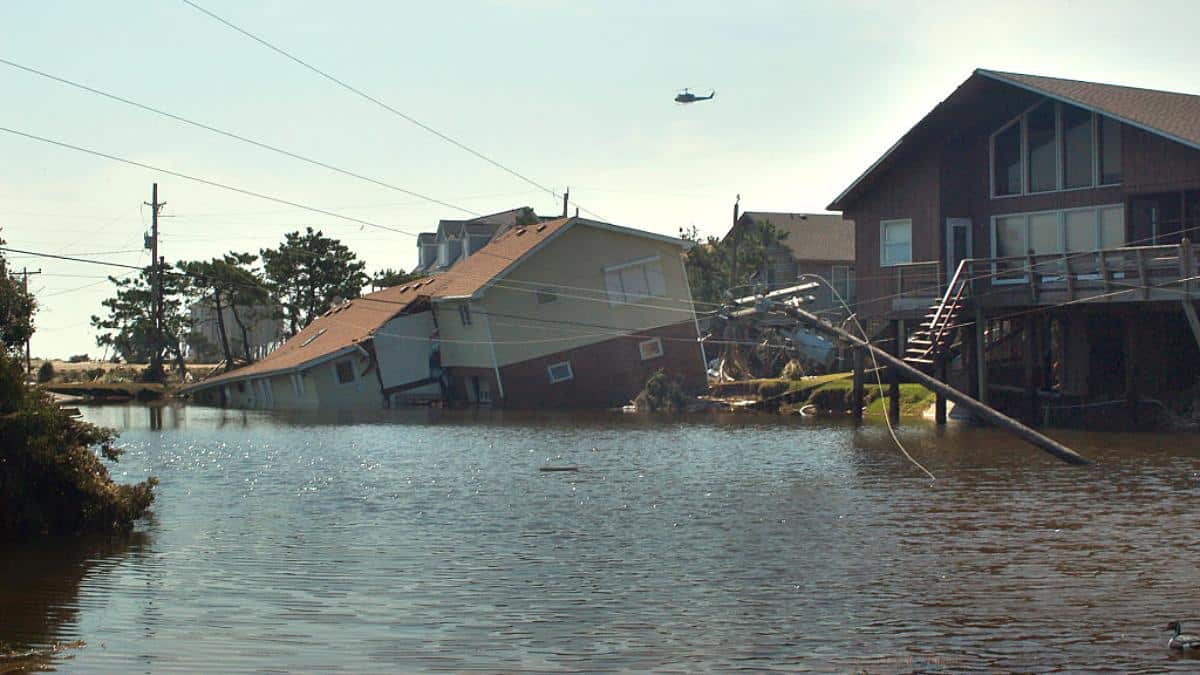 NOAA analysts found that Cape Hatteras, North Carolina has a 16% chance of a direct hit by a hurricane in any given year. A military helicopter flies over the damage path of Hurricane Isabel on Sept. 18, 2003. James P. Reed / Corbis via Getty Images

Every coastline in the North Atlantic is vulnerable to tropical storms, but some areas are more susceptible to hurricane destruction than others.

To understand why as the region heads into what’s forecast to be another busy hurricane season, let’s look more closely at how tropical storms form and what turns them into destructive monsters.

Ingredients of a Hurricane

Three key ingredients are needed for a hurricane to form: warm sea surface water that’s at least about 80 degrees Fahrenheit (26.5 C), a thick layer of moisture extending from the sea surface to roughly 20,000 feet and minimal vertical wind shear so the thunderstorm can grow vertically without interruption.

These prime conditions are often found in the tropical waters off the west coast of Africa. 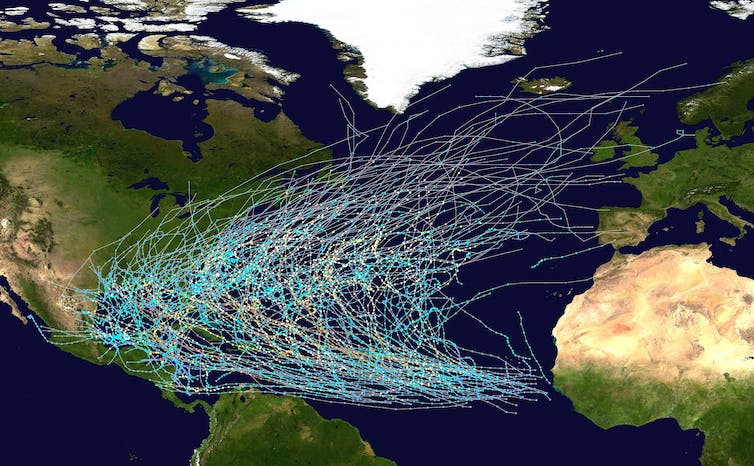 Hurricanes can also form in the Gulf of Mexico and the Caribbean, but the ones that start close to Africa have thousands of miles of warm water ahead that they can draw energy from as they travel. That energy can help them grow into powerful hurricanes.

Wind currents set most tropical storms on a course westward from Africa toward the Caribbean, Florida and the Gulf of Mexico. Some drift northward into the midlatitudes, where the prevailing winds shift from west to east and cause them to curve back out into the Atlantic.

Others encounter cooler ocean temperatures that rob them of fuel, or high wind shear that breaks them apart. That’s why tropical cyclones rarely hit northern states or Europe, though it does happen. 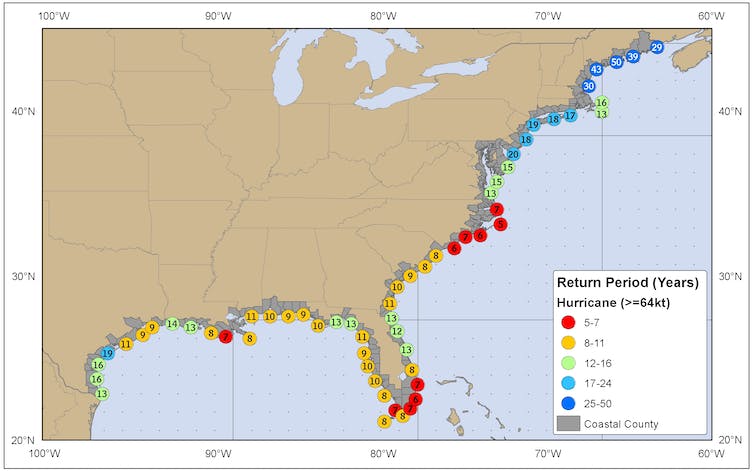 The numbers shown here reflect how often a hurricane would be expected within 50 nautical miles. The red dots suggest a hurricane every five to seven years. NOAA

Early in the season, in June and July, sea surface temperatures are still warming and atmospheric wind shear slowly decreases across the open Atlantic. Most early-season hurricanes develop in a small area of the Caribbean and Gulf of Mexico where prime conditions begin early.

They typically form close to land, so coastal residents don’t have much time to prepare, but these storms also don’t have ideal conditions to gain strength. Texas, Louisiana and Mississippi, as well as Central America, are more likely to see hurricane strikes early in the season, as the trade winds favor an east-to-west motion.

As surface waters gain heat over the summer, hurricane frequency and severity begin to increase, especially into the peak hurricane months of August through October.

Toward the end of the season, trade winds begin to shift from west to east, ocean temperatures start to fall, and cold fronts can help divert storms away from the western Gulf and push them toward the Florida Panhandle. 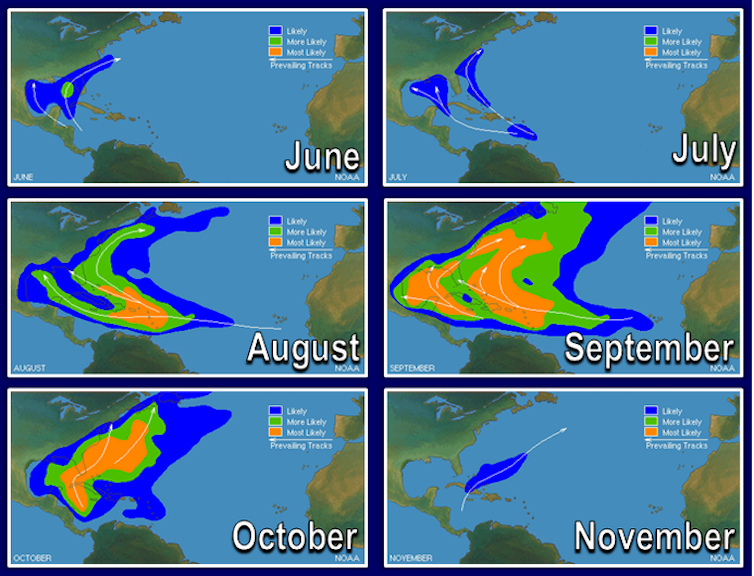 The busiest areas during each month of hurricane season. NOAA

Shape of the Seafloor Matters for Destructiveness

The shape of the seafloor can also play a role in how destructive hurricanes become.

Hurricane strength is currently measured solely on a storm’s maximum sustained wind speeds. But hurricanes also displace ocean water, creating a surge of high water that their winds push toward shore ahead of the storm.

This storm surge is often the greatest threat to life and property from a hurricane, accounting for about 49% of all direct fatalities between 1963 and 2012. Hurricane Katrina (2005) is a prime example: An estimated 1,500 people lost their lives when Katrina hit New Orleans, many of them in the storm surge flooding.

If the continental shelf where the hurricane hits is shallow and slopes gently, it generally produces a greater storm surge than a steeper shelf.

Where Are the Hurricane Hot Spots?

A few years ago, the National Oceanic and Atmospheric Administration analyzed the probability of U.S. coastlines’ being hit by a tropical storm based on storm hits from 1944 and 1999.

It found that New Orleans had about a 40% chance each year of a tropical storm strike. The chances rose for Miami and Cape Hatteras, North Carolina, both at 48%. San Juan, Puerto Rico, which has seen some devastating storms in recent years, was at 42%.

Hurricanes, which have sustained wind speeds of at least 74 miles per hour, were also more frequent in the three U.S. locations. Miami and Cape Hatteras were found to have a 16% chance of a direct hit by a hurricane in any given year, and New Orleans’ chance was estimated at 12%.

Each of these locations is vulnerable to a hurricane because of its location, but also its shape. North Carolina and Florida “stick out like a sore thumb” and are often grazed by hurricanes that curve up the east coast of the U.S. 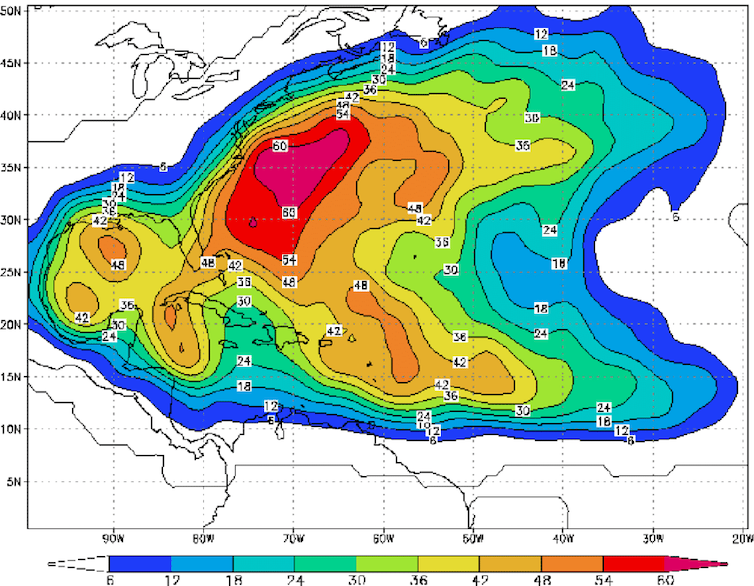 The probability that a named storm tropical storm or hurricane will affect a location at some point during hurricane season. Todd Kimberlain / AOML NOAA

As sea surface temperatures rise with the warming of the planet, more areas outside of these usual hurricane regions may see more tropical storms.

I analyzed tropical cyclones in the North Atlantic that made landfall from 1972 to 2019 to look for changes over the past half-century.

During the first six years of that period, 1972-77, the Atlantic averaged four direct hits per year. Of those, 75% were in the usual hurricane-prone areas, such as the Southern United States, the Caribbean and Central America. Six storms made landfall elsewhere, including New England, Canada and the Azores.

By 2014-19, the Atlantic averaged 7.6 direct hits per year. While the U.S. took the majority of those hits, Europe has been showing a steady increase in cyclones making landfall. Major hurricanes – those with sustained wind speeds of 111 miles per hour and above – are also more common than they were in the 1970s and ’80s.

While southern coastal locations of the United States may be the most vulnerable to tropical cyclone impacts, it is important to understand that a devastating cyclone can hit anywhere along the Atlantic and Gulf coasts.

The National Hurricane Center is forecasting another busy season in 2021, though it is not expected to be as extreme as 2020’s record 30 named storms. Even if an area hasn’t experienced a hurricane in several years, residents are advised to prepare for the season as if their area will take a hit – just in case.

Athena Masson is a meteorology instructor at the University of Florida.

Disclosure statement: Athena Masson does not work for, consult, own shares in or receive funding from any company or organization that would benefit from this article, and has disclosed no relevant affiliations beyond their academic appointment.