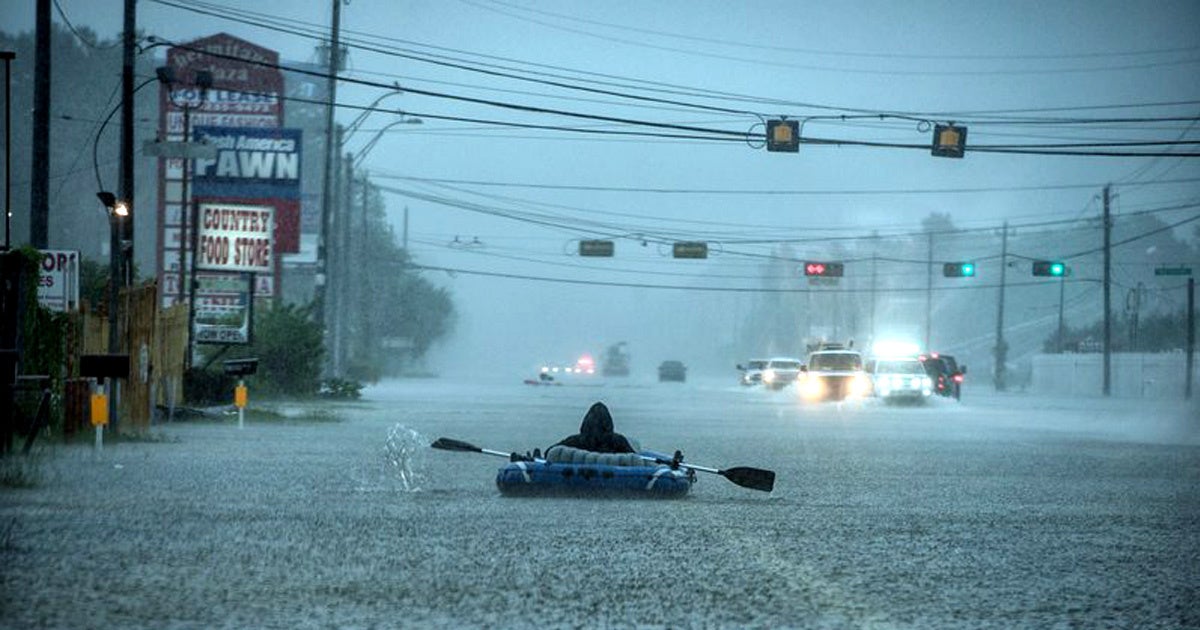 A person in an inflatable boat paddles down flooded Highway 610 in Houston. Mannie Garcia / Greenpeace

With rain expected to continue falling through this Friday, what we already know about Hurricane Harvey paints a devastating picture.

The equivalent of half of Houston’s annual average rainfall has fallen in the last 48 hours; 80,000 households are without electricity; Houston emergency services have received almost 6,000 urgent appeals for rescues; 54 Texas counties have been declared state disaster areas; thousands of people are displaced or in shelters; five people have died.

And climate change is making it all worse.

This is Houston. I-45 is flooded. pic.twitter.com/X0mSeQTT8c

While we cannot say definitively that climate change caused Hurricane Harvey, science tells us with confidence that it has increased the impact of the flooding and heightened the intensity of the storm.

But this shouldn’t come as a surprise. For many years, scientists have warned that our continued reliance on fossil fuels will lead to bigger and more devastating storms.

It’s also abundantly clear that coastal Texas and the wider Gulf region (which has seen this kind of event before), are on the frontlines of sea level rise and extreme weather heightened by climate change. And Houston in particular—with its slate of oil, gas, and chemical refineries owned by companies like Exxon and Shell—faces the additional risk of toxic petrochemical chemical spills into nearby communities.

We expect to see flares, or "upsets" like this one at #TX PetroChemical (TPC) during #HurricaneHarvery #Harvey @EPAregion6 @BridgeTheGulf pic.twitter.com/gePobkfo5c

When disasters like Harvey strike, those standing in the way of climate action must answer to the victims.

That means we’re looking at you, Greg Abbott. The Texas governor has been on record for years denying the science of climate change, stating that scientists disagree (they don’t) and that their findings “need to continue to be investigated” (not really). He also sued the U.S. Environmental Protection Agency over the Clean Power Plan, President Obama’s initiative to reduce greenhouse gas emissions from power plants.

There’s also Ted Cruz, the Texas senator so committed to discrediting climate science he once convened a Senate hearing on the issue and filled his panel with “scientists” paid by the fossil fuel industry.

But this goes beyond Texas—we’re also looking at you, Donald Trump. Not only is Trump a unapologetic climate denier who has spent his time in office dismantling every climate protection activists have won in recent years, he also rolled back an Obama-era rule that required new infrastructure to be built with climate resiliency in mind (flood protection, specifically).

How you can support the victims of Hurricane Harvey.

In the long run, helping those impacted by extreme weather events means holding big polluters—like Exxon—and climate deniers—like Trump, Cruz, Abbot and Smith—accountable. Only a just transition away from fossil fuels and toward a clean energy economy can soften the impact of the next superstorm to come our way.

But right now, folks on the ground need your immediate support as they deal with power outages, continued flooding, and overcrowded shelters.

Concerned about #HarveyRelief? Want to give to #AJustHarveyRecovery? Start here: https://t.co/wDpTQSuWC3 (plans are in the works for more)

Giving money? Consider donating to a local relief effort. Want to give supplies? There are supply drives for items like water and basic hygiene products across Louisiana and the Gulf. Looking for other ways to donate your time? Use this guide from our friends at Another Gulf Is Possible to find more ways you can support.