This is the first hurricane to make landfall in the state in 11 years. Storm surge is estimated to have reached as high as 9 feet in some places. The National Hurricane Center expects storm rainfall totals of 5 to 10 inches across the southeastern U.S., with isolated totals reaching upwards of 15 inches and has warned of “life-threatening inundation” along the Gulf Coast of Florida for next 24 hours.

According to Jeff Masters and Bob Henson at WunderBlog:

By later in the weekend, Hermine may regain some of its tropical characteristics. Computer models indicate it will slow down Sunday into Monday and perhaps even carry out a tightly looping path east of the Delmarva and south of Long Island, NY. Ocean temperatures are more than 2°C above average in this region. This may be warm enough to allow Hermine’s winds to restrengthen close to hurricane force near its center by Monday or Tuesday, regardless of whether it is classified as a tropical or post-tropical storm by that point. Even if it does become post-tropical, NHC will continue issuing advisories on Hermine as long as it remains a significant threat to land. 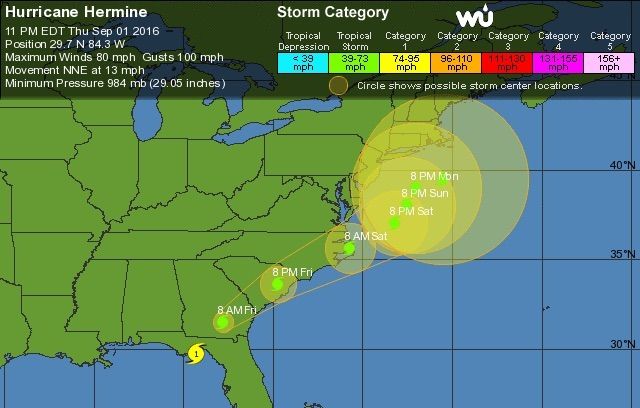 The official track forecast for Hurricane Hermine as of 11 pm EDT Thursday. Hermine’s dramatic slowdown is evident in the period from Sunday to Tuesday.WunderBlog

Hermine highlights the risks associated with hurricanes in a warming world. Near record-warm ocean temperatures in the Gulf of Mexico evaporated near-record amounts of water into the atmosphere for Hermine. Sea levels in northwest Florida have risen nearly a foot in the past decades, increasing the threat of storm surge and flooding.