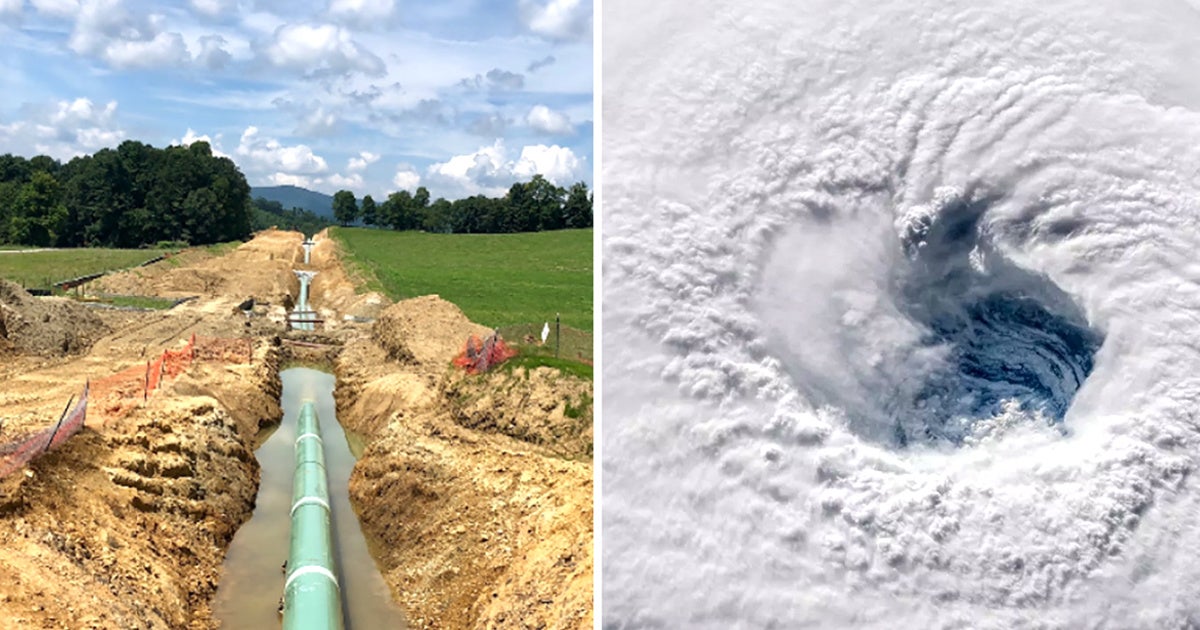 As Hurricane Florence churns menacingly toward the Mid-Atlantic coast, residents of South Carolina, North Carolina and Virginia hold their breath, wondering where the massive storm surge, howling winds and torrents of rain will hit hardest.

More than 300 miles inland, southwest Virginia residents may also face dangerous flooding, and some worry that Florence may exacerbate the threats from a different, manmade hazard: the Mountain Valley Pipeline (MVP).

Hurricane Florence is projected to be an “extremely dangerous” storm, poised to inflict life-threatening impacts on low-lying coastal communities—and it may also dump vast quantities of rain over a limited area after making landfall, catastrophic rainfall and flooding as Hurricane Harvey did last year to Houston, Texas. Forecasters don’t know where such flooding will occur, but one possible target is the Appalachian Mountains, including mountainous southwest Virginia—the site of the Mountain Valley Pipeline (MVP).

The pipeline would carry fracked methane gas from West Virginia into Virginia, where it will connect with an existing pipeline system. Methane is a powerful greenhouse gas that accelerates climate change, and extracting methane using fracking utilizes complex mixes of chemicals, many known to be toxic, contaminating millions of gallons of water as well as emitting dangerous air pollutants.

Residents along the route have protested the loss of private property and destruction of treasured places, but the pipeline company has secured the right of eminent domain and has so far proved unstoppable. Along its 303-mile route, a swath 125 feet wide is now being clearcut; trenches are being opened; pipes 42 inches in diameter are being laid. This heavy-construction scar will through farms and national forests, up and down steep mountain slopes, even across the Appalachian Trail.

Where the pipeline crosses steep mountains, erosion is a grave hazard. Locals fear that sediment will choke local streams and rivers, damaging the water sources of cities like Salem and Roanoke, VA as well as private wells and springs serving rural homes. Clearing land and digging trenches has already muddied local streams, choked off intermittent streams, and caused a mudslide that closed a local road, despite erosion control measures taken by the pipeline company. Heavy rainfall poses a particular threat.

The geology of southwest Virginia magnifies the danger. Much of the land is karst, a porous limestone that has eroded over time, producing sinkholes, caverns and underground channels. Should the ground sink, pipes could buckle into underground caves. Heavy rainfall increases the threat.

Now, with Florence on its way, residents and developers alike worry about what may happen if the hurricane drops torrents of rain. Construction on the MVP was temporarily halted on Tuesday, and the pipeline company said it was focusing on steps to maintain erosion and sediment controls. However, such controls have failed repeatedly in the face of normal rainfall events.

Anti-pipeline activist Tina Smusz, a retired Emergency Medicine physician who has lived in the region’s mountains for 33 years, is monitoring conditions. She notes, “If we have as much rain as they’re predicting, we’re expecting landslides. We’ve already had one road closed by eight inches of mud washing down from a worksite. And that was not an extraordinary rain.”

“We have bare soil and denuded slopes all along the pipeline corridor,” she added. “Trees, brush and vegetation have been removed, tree roots have been pulled out. So you’re looking at highly erodible soil expanses and the danger of massive erosion on our slopes.”

In addition, Smusz worries about the impact that erosion would have on buried pipes once gas is flowing through the line: “Those pipes may be exposed as the soil over them is churned off when we have torrential rain. That could lead to pipeline ruptures, with the pipe buckling on itself” as the supporting soil under the pipe is washed away.

If this were to happen, it could lead to an explosion and intense fire. That’s not just theoretical: A natural gas pipeline exploded in a massive fireball in Beaver County, Pennsylvania less than a week ago, on Sept. 10, a mere seven days after the pipeline went into operation. The Pittsburgh Post-Gazette reported that “while an investigation is underway, officials believe a landslide may have ruptured the line.” The cause of the landslide was not reported.

With those potential risks weighing on their minds, Virginians are watching and waiting to see what harms Hurricane Florence will bring to their neighborhoods and their communities.