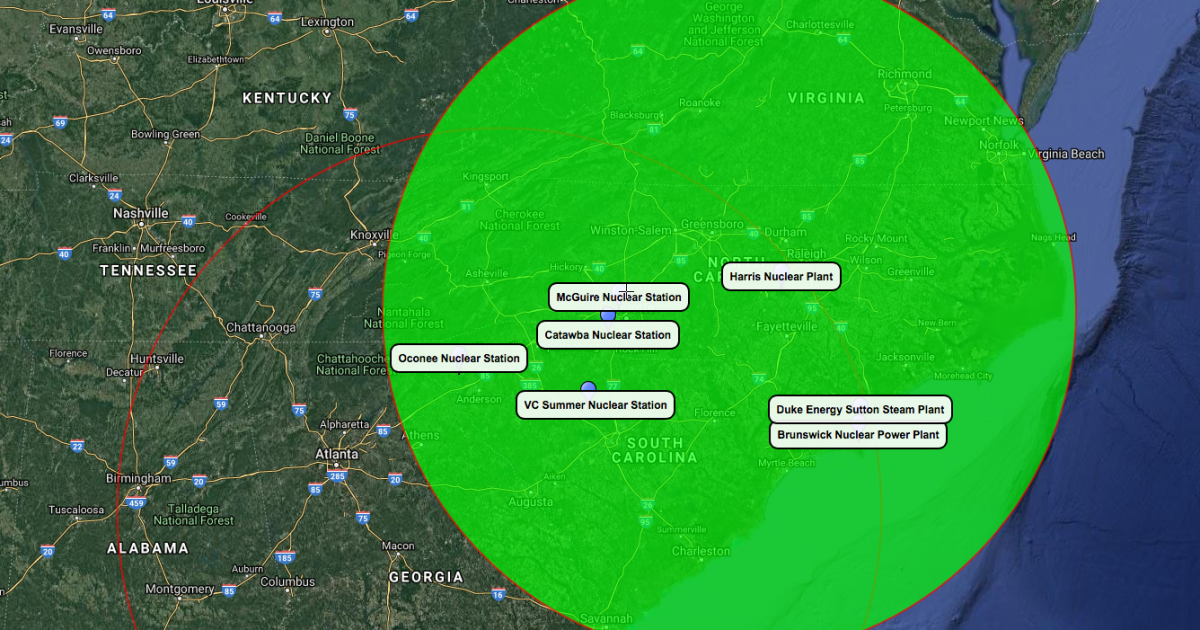 With 1.5 million residents now under orders to evacuate their homes in preparation for Hurricane Florence’s landfall in Virginia, North Carolina and South Carolina, the region faces the possibility of catastrophe should the storm damage one or more of the nuclear power plants which lie in its potential path.

The plants thought to lie in the path of the hurricane, which is expected to make landfall on the Southeastern U.S. coast on Thursday, include North Carolina’s Brunswick Nuclear Power Plant in Southport, Duke Energy Sutton Steam Plant in Wilmington, and South Carolina’s V.C. Summer Nuclear Station in Jenkinsville.

“Florence will approach the Carolina coast Thursday night into Friday with winds in excess of 100mph along with flooding rains. This system will approach the Brunswick Nuclear Plant as well as the Duke-Sutton Steam Plant,” Ed Vallee, a North Carolina-based meteorologist, told Zero Hedge. “Dangerous wind gusts and flooding will be the largest threats to these operations with inland plants being susceptible to inland flooding.”

This nuclear power plant is literally directly in the path of Florence, at the southern coast near Wilmington https://t.co/UAkEruvvAy pic.twitter.com/fQGeSqtPgR

In 2015, the Huffington Post and Weather.com identified Brunswick as one of the East Coast’s most at-risk nuclear power plants in the event of rising sea levels and the storm surges that come with them.

As of Tuesday afternoon, Hurricane Florence was thought to have the potential to cause “massive damage to our country” according to Jeff Byard, associate administrator of the Federal Emergency Management Agency (FEMA).

The storm was labeled a Category 4 tropical storm with the potential to become a Category 5 as it nears the coast, with 130 mile-per-hour winds blowing about 900 miles off the coast of Cape Fear, North Carolina.

Meteorologists warned of hurricane-force winds in the region by mid-day Thursday, with storm surges reaching up to 12 feet or higher.

Based on current forecasts, #Florence could produce the highest storm surge on record in the Carolinas: 15 to 20 feet quite possible. https://t.co/sACBneBHcx pic.twitter.com/zI8Amkoh3t

The 2011 Fukushima disaster remains the highest-profile nuclear catastrophe caused by a natural disaster. The tsunami that hit Japan in March of that year disabled three of the plant’s reactors, causing a radioactive release which forced hundreds of thousands of people from their homes.

In 2014, Shane Shifflett and Kate Sheppard at the Huffington Post reported on the risk storms like Florence pose to nuclear plants:

Most nuclear power facilities were built well before scientists understood just how high sea levels might rise in the future. And for power plants, the most serious threat is likely to come from surges during storms. Higher sea levels mean that flooding will travel farther inland, creating potential hazards in areas that may have previously been considered safe.

During hurricanes, many nuclear facilities will power down—but this is not a sure-fire way to avoid disaster, wrote Sheppard and Shifflett.

“Even when a plant is not operating, the spent fuel stored on-site, typically uranium, will continue to emit heat and must be cooled using equipment that relies on the plant’s own power,” they wrote. “Flooding can cause a loss of power, and in serious conditions it can damage backup generators. Without a cooling system, reactors can overheat and damage the facility to the point of releasing radioactive material.”