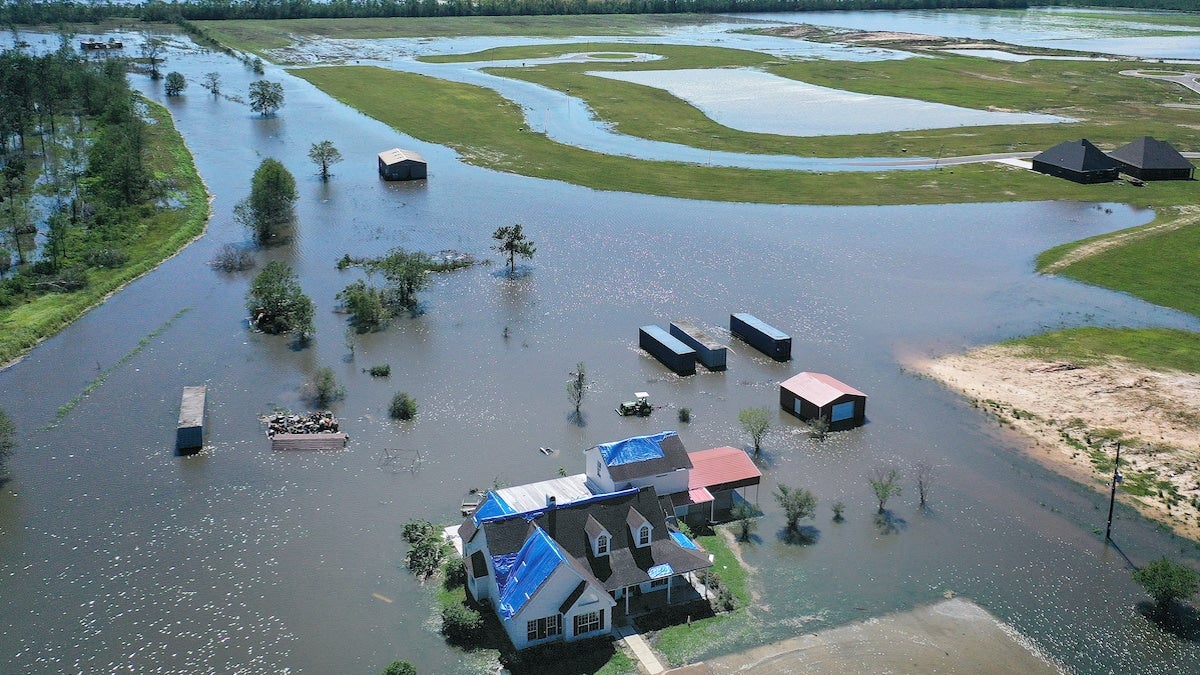 Especially hard hit by the one-two punch of storms was the town of Lake Charles, The Associated Press reported. While Delta was weaker than Category 4 Laura, which damaged almost every building in the town, the second storm brought more flooding, inundating hundreds of the same buildings.

“Add Laura and Delta together and it’s just absolutely unprecedented and catastrophic,” Lake Charles Mayor Nic Hunter told The Associated Press. “We are very concerned that with everything going in the country right now that this incident may not be on the radar nationally like it should be.”

#Delta is the 2nd #hurricane to make landfall in Louisiana this season (Laura was the other). This is the first year with multiple hurricane landfalls in Louisiana since 2005 (Cindy, Katrina and Rita made landfall that year). pic.twitter.com/6x4EIBV3KR

In addition to walloping Lake Charles, Delta also knocked out power to more than 400,000 homes and businesses in Louisiana, Mississippi and Texas as of Sunday morning, CNN reported. The outages had deadly results. An 86-year-old man in St. Martin Parish, Louisiana died in a fire after trying to fuel a generator in his shed.

The storm weakened to a post-tropical cyclone and moved north out of Louisiana over the weekend but continued to cause damage. A train derailed in Lilburn, Georgia because of heavy rain, and two tornadoes also touched down in the state, injuring two.

By Sunday night, the post-tropical remnants of the storm were located about 60 miles north-northeast of Atlanta, Georgia and were expected to continue to weaken, the National Hurricane Center said.

The back-to-back impacts of Laura and Delta are a reminder of how catastrophes can compound because of the climate crisis.

“We live today in the age of crisis conglomeration,” climate justice writer Mary Annaïse Heglar wrote for Rolling Stone Oct. 4. “It is no longer useful or honest or even smart to look at any of them through a single lens.”

The climate crisis is making hurricanes wetter and more likely to intensify rapidly, as both Laura and Delta did. And the storms together have forced more than 9,000 people in Louisiana into shelters in the middle of the coronavirus pandemic, as The Washington Post reported.

“We are responding to Hurricane Delta and continue to recover from Hurricane Laura in a covid environment,” Louisiana Gov. John Bel Edwards said Sunday, urging people to continue social distancing and wearing masks as they respond to the storm.

On Sunday, he said 20 more people in the state had died of the disease.

Hurricane Delta is also the latest record-breaker in an unprecedented Atlantic hurricane season. It was the earliest ever 25th named storm, and the 10th named storm to make landfall in the U.S., the most ever in a single season, meteorologist Steve Bowen pointed out on Twitter.

#Delta has made landfall in Louisiana. This marks a record 10th named storm landfall on the U.S. mainland, and the fifth hurricane (second-most). Prior to Delta's landfall, 2020 U.S. tropical cyclones had caused at least $26B in direct economic loss or damage (subject to change). pic.twitter.com/cQGTRfCaTg