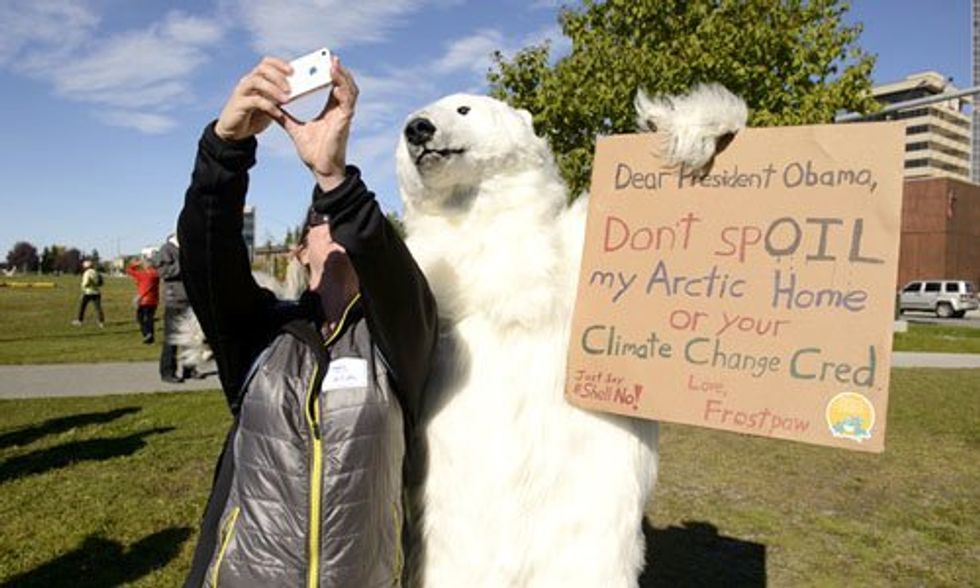 Climate groups rallied in Anchorage, Alaska yesterday to demand that the U.S. government, President Obama and Alaskan leaders take the urgent action needed to stop climate change. The “Rally to Confront the Glacial Pace of Political Action” took place as President Obama met with ministers from around the world for the "GLACIER" conference.

Peggy Wilcox of Anchorage takes a selfie with Frostpaw the polar bear at the rally. Photo credit: Mark Meyer / Greenpeace

More than 300 people participated in yesterday's rally. The groups four "demands" for political leaders include:

In response to the President's visit, Faith Gemmill of RedOil said, “Indigenous peoples of Alaska have seen alarming impacts from climate change already, and Shell’s drilling will only make them worse. We’ve seen over 300 wildfires this past summer which burned throughout the state and forced communities to evacuate, as well as the very real threat of actual forced relocation of coastal communities due to coastal sea ice loss and erosion."

The President has said again and again that climate change poses a serious threat to humanity and in going to Alaska, he is highlighting how the state is on the front lines of the fight against climate change.

At the "GLACIER" conference, Obama said, “I have come here today, as the leader of the world’s largest economy and its second-largest emitter to say that the United States recognizes our role in creating this problem and embraces our responsibility to help solve it. And I believe we can solve it."

And yet, environmentalists point out the President just gave final approval to Shell to begin drilling in the Arctic. To many, that smacks of hypocrisy.

“There is no clearer symbol of the self-defeating hypocrisy of his policies on energy and climate,” said the group Credo. "Climate leaders don't drill the Arctic."

"It's as if the health teacher giving the anti-smoking talk to junior-high assembly had a Marlboro dangling from her lip," said Bill McKibben in a recent post on Medium.

Environmentalists and scientists say any further exploitation of fossil fuels must be halted in order to limit the rise in average global temperatures to within 2°C of pre-industrial levels and avert serious climate change.

Zach Brown participates in the rally which coincided with President Obama's visit with ministers from around the world for the "GLACIER" conference. Photo credit: Mark Meyer / Greenpeace

President Obama emphasized two things during his speech in Alaska: the urgency of climate change and the possibility of solving it. But it’s time for the President to stop talking about urgency, and stop approving extreme fossil fuel projects like Shell’s Arctic drilling plans. In fact, the approval of that very project undermines every other bold move the President has made on climate change including the recent Clean Power Plan.

After President Obama’s comments on climate change tonight, it’s clear he realizes what he has to do.  It’s time for him to show courage and leadership equal to the people around the world who have stood up against Arctic drilling. He must stop Shell’s plans and put a moratorium on future drilling in the Arctic ocean.

"President Obama’s visit to Alaska puts a spotlight on his climate hypocrisy," says Friends of the Earth Climate Campaigner Marissa Knodel. "Rubber-stamping Shell’s reckless pursuit for Arctic oil and gas is antithetical to calling for climate action. By allowing these unburnable fossil fuels to be developed, President Obama is making the adverse climate impacts that Alaska is experiencing worse, not better. If President Obama wants to be a true climate leader, he needs to disavow his 'all of the above' energy plan and keep Arctic oil and gas in the ground."

In rallying yesterday, the groups are hoping that the President will change his mind on Arctic drilling. “We are thankful the President is willing to see for himself the real impacts of climate change, but we hope that once he understands the dire situation, he would go further and actually address the situation by taking effective action such as canceling Shell’s Arctic drilling,” said Faith Gemmill of RedOil.

In President Obama's weekly address, he acknowledged critics' concerns about drilling in the Arctic, saying:

I know there are Americans who are concerned about oil companies drilling in environmentally sensitive waters.  Some are also concerned with my administration’s decision to approve Shell’s application to drill a well off the Alaskan coast, using leases they purchased before I took office. I share people’s concerns about offshore drilling. I remember the BP spill in the Gulf of Mexico all too well.

That’s precisely why my administration has worked to make sure that our oil exploration conducted under these leases is done at the highest standards possible, with requirements specifically tailored to the risks of drilling off Alaska.  We don’t rubber-stamp permits. We made it clear that Shell has to meet our high standards in how they conduct their operations— and it's a testament to how rigorous we've applied those standards that Shell has delayed and limited its exploration off Alaska while trying to meet them. The bottom line is, safety has been and will continue to be my administration’s top priority when it comes to oil and gas exploration off America’s precious coasts—even as we push our economy and the world to ultimately transition off of fossil fuels.