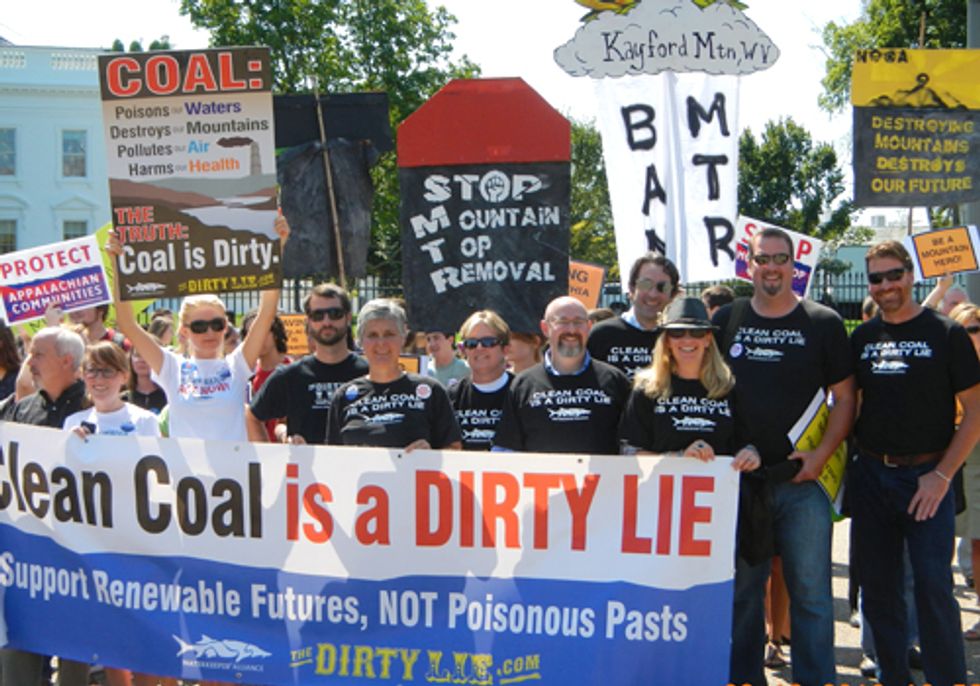 Waterkeeper Alliance joined hundreds  of people today to stand in solidarity with Appalachia in front of the White House to tell President Obama to be a hero and end mountaintop removal coal mining.

Hundreds rally at the White House to urge President Obama to be a hero and end mountaintop removal coal mining.

The Summer of Solidarity event began with a rally in Lafayette Park in Washington, DC where speakers spoke passionately about the urgent need to shift towards clean energy and away from extreme forms of dirty energy like coal which poisons our waters, destroys our mountains, pollutes our air and harms our health.

Waterkeeper Alliance stands in solidarity with Appalachia because we ALL need clean water and renewable energy in our future—not the dirty fossil fueled energy of the past that poisons and pollutes the world's waterways.

Larry Gibson was honored and remembered today and his fighting spirit inspired hundreds.

Each of the 13,000 messages decried this radical form of strip mining in Appalachia that has impacted more than 500 mountains and buried more than 2,400 miles of streams. Recent peer-reviewed scientific studies have shown widespread devastating health problems near mountaintop removal mining: citizens near mountaintop removal are 50 percent more likely to die of cancer and 42 percent more likely to be born with birth defects as compared with other people in Appalachia.

Maria Gunnoe and many other residents of Appalachia attended the rally.

When learning of about Larry Gibson's death on Sunday Waterkeeper Alliance president Robert F. Kennedy, Jr. stated, “My uncle, President Kennedy, said that, ‘moral courage is a far greater commodity than physical courage.’ Larry Gibson had extraordinary physical courage with standing arrests, beatings, bullets, dog kills, car chases and attacks on his home–but he was the Achilles of moral courage. He stood up for all of us and for American democracy against the apocalyptical forces of ignorance and greed. The coal companies tried to crush him but it could never subvert his integrity or spirit.  Larry was our leader in the coal fields and he died with his boots on.”

In the doorway of the White House Council of Environmental Quality, Teri Blanton's grandson delivers a DVD with 13,000 personal photos and messages from people across America urging President Obama to end mountaintop removal coal mining.