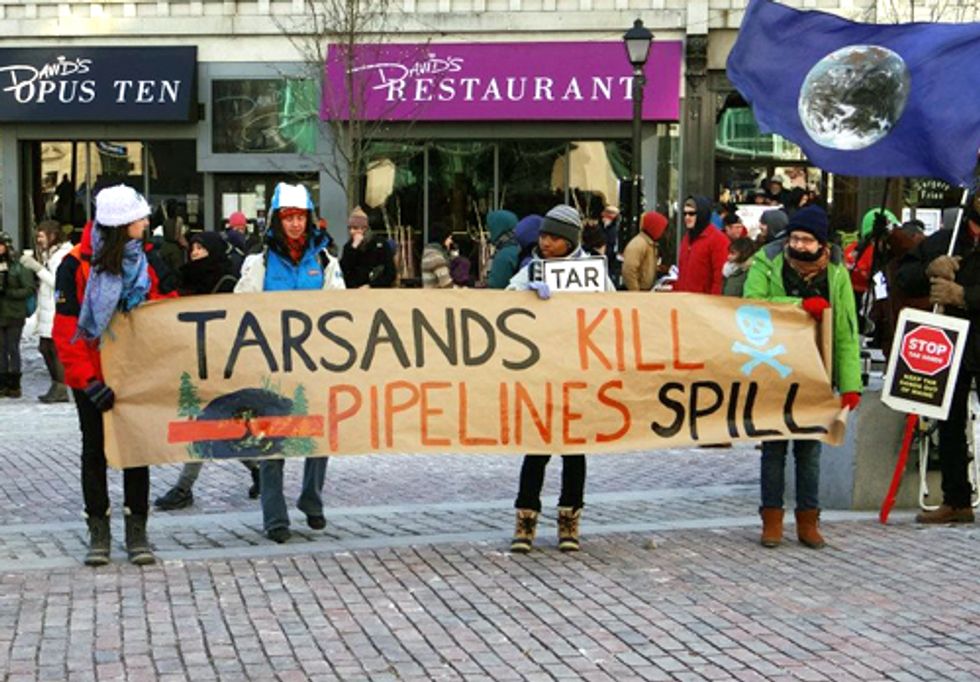 Yesterday, in the largest protest in the Northeast against tar sands, hundreds of people from Maine, New England and Canada carried signs and marched across Portland to rally at the Maine State Pier.

The rally and march were held to oppose an emerging proposal to send dirty tar sands oil through the 236-mile long, 62-year-old Exxon/Enbridge pipeline across Canada, Maine and New England. Specifically, participants called on elected officials and the U.S. State Department to require a new Presidential Permit application and full environmental review before the company could reverse the pipeline to carry tar sands. Unless the State Department decides to require a new Presidential Permit, there may not be a permit application, adequate public input or environmental review in store for this line reversal and change to pipe tar sands oil.

Speakers addressed the crowds at the rally on Maine State Pier, against the backdrop of oil tanks and tankers in Casco Bay.

Jill Stein, the nominee of the Green Party for President of the U.S. in the 2012 election, speaks at the rally.
Photo by Erik Hoffner - www.erikhoffner.com

“Reversing the flow of the Portland Pipeline so tar sands oil can be delivered to Portland Harbor would pose some serious environmental risks and I'm going to ask the Obama Administration to do a full environmental review of any attempts to pump tar sands through that pipeline,” said Congresswoman Chellie Pingree (D-ME). “Exxon Mobile shouldn't be allowed to go ahead with this risky scheme without a Presidential Permit and I don't believe the facts will support one.”

“With climate change once again at the forefront of our minds, it is crucial that we work together to end our dependence upon on foreign oil and keep our community free of fuels like tar sands,” said Portland Mayor Michael Brennan. “We need to work together to expand the market for renewable energy and eliminate the demand for tar sands and other fuels that are not only a root cause for climate change, but also carry real risks of pollution and spills in our backyard.” Portland City Council members are now considering a measure that would ensure the city does not use fuel made from tar sands oil in its vehicles or buildings.

“I’m so proud to be here today to say ‘no’ to tar sands in Maine. The people of Casco have spoken that tar sands would be a bad deal. There is too much at risk for our town and our welfare.” said Connie Cross, a resident of Casco. Casco was the first Maine town to vote against the pipeline at its town meeting in December 2012. Several other towns are considering similar resolutions.

“People ask me about the scientific imperative to address climate change.” said Unity College President Stephen Mulkey. “Actually science doesn’t tell us what to do—it tells us about some of the disastrous consequences of doing nothing. This is a moral and practical imperative. That we must have this rally and march is evidence that our leaders are having the wrong discussion. This tar sands pipeline should simply be unthinkable at this stage of the climate crisis. We are out of time, and our kids will hold us accountable." Unity College was the first college in the nation to divest its endowment from fossil fuels.

“As a landowner living along the Crooked River and near the pipeline I absolutely oppose sending toxic tar sands through this pipeline,” said Lee Margolin a landowner and business owner in Harrison. “The increased risk of a toxic tar sands spill is a health concern for me and my family first and foremost. I also own a small brewery that depends on clean water—I’m just one of thousands of businesses in the region that depends on a clean environment and clean water.”

“Today people from across Maine and the northeast are sending a clear signal that tar sands doesn’t belong here,” said Dylan Voorhees, clean energy director for the Natural Resources Council of Maine. “A tar sands pipeline would be far too dangerous for our waters, our health, our climate, our economy.”

The rally was held to demonstrate a wall of opposition to this risky proposal and to call on federal officials to ensure there is a full environmental review of this project—because the threats are too great for the environment and economy of Maine, New England, Canada and the Earth.

Maine is threatened by the emerging proposal to reverse the direction of an ExxonMobil/Enbridge oil pipeline and to start sending tar sands through it instead. The pipeline runs through Ontario, Quebec, Vermont, New Hampshire and Maine to Portland Harbor. In Maine, the pipeline passes next to Sebago Lake, the drinking water supply for more than 15 percent of Mainers, crosses the Androscoggin and Crooked Rivers, and ends at Casco Bay, where it could endanger fishing and lobster industries.

Heavy, thick tar sands oil is more toxic, corrosive and dangerous to ship through pipelines, putting the region’s environment, water quality and economy at risk. Tar sands oil is diluted with toxic chemicals like benzene, and per mile of pipe, tar sands pipelines have leaked or spilled at three times the rate of conventional oil pipelines. When tar sands does spill, it causes more damage to the health of people and our environment by sinking into sediments and releasing toxic gases. Tar sands oil spills are also nearly impossible to clean-up, even at enormous expense, as evidenced by the 2010 spill in Michigan’s Kalamazoo River. That spill is still being cleaned today, at a cost of more than $725 million and counting. Even in its more refined form of “Synthetic Crude Oil,” tar sands has a massive environmental and climate footprint.

"Unless we raise our voices and insist this reckless pipeline project is thoroughly reviewed and then rejected, it will go forward without ever considering the massive potential impacts to Sebago Lake, Casco Bay and our climate,” said Environment Maine director Emily Figdor. “It may take an army of us to go toe-to-toe with ExxonMobil, the biggest of Big Oil, but together we can convince President Obama to stop the project, protect the waterways we love and tackle the climate crisis."

“Landowners in the Western foothills have been partnering with the land trusts protecting the Crooked River watershed for years to conserve precious lands and waters in Western Maine, to protect essential fisheries and to insure clean drinking water for the greater Portland area,” said Lee Dassler, executive director of the Western Foothills Land Trust. “We treasure and depend on a clean environment with public access, for recreation, for family and cultural traditions, and to help support our economy. A tar sands pipeline could place those efforts at risk. We need to keep tar sands out of Maine.”