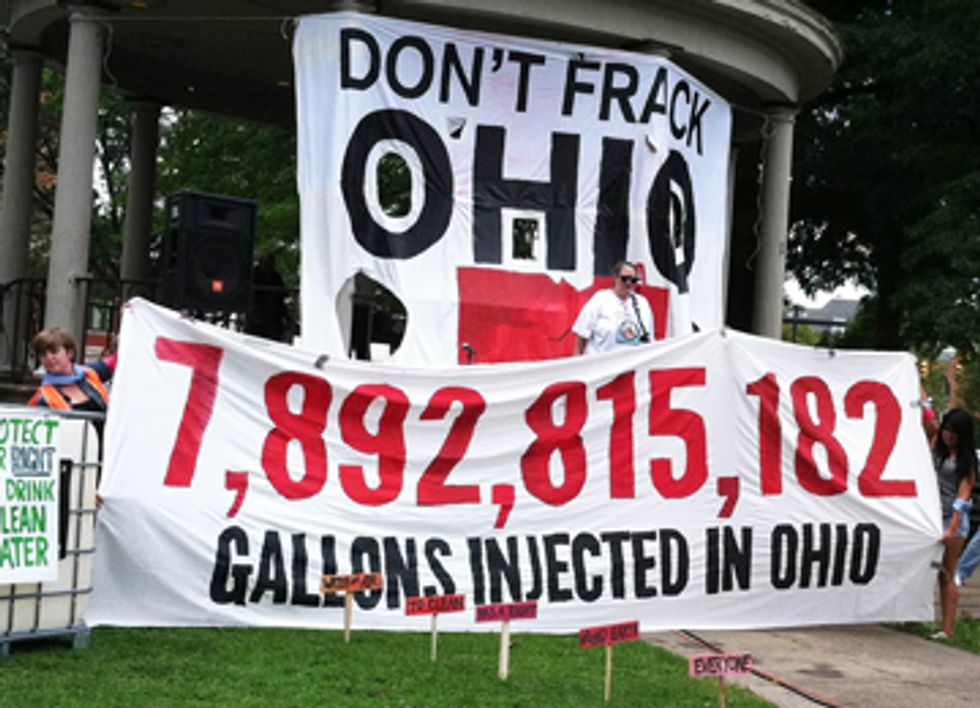 A coalition of local, statewide and national groups concerned about toxic waste from hydraulic fracturing, better known as fracking, converged on Portage and Trumbull counties yesterday for Don’t Frack Ohio 2.0. The coalition called for an end to the state being used as a regional dumping ground for oil and gas waste. The rally drew 250 participants in an area heavily targeted by the oil and gas industry for disposal of toxic radioactive drilling waste from fracking. The rally was held in Courthouse Square in Warren, OH, and faith leaders led participants in an interfaith service at a nearby impacted area following the rally.

Rabbi Josh Jacobs-Velde and Father John Rausch led 120 people in the interfaith service at the nearby Raymond-Pander injection well site, preventing access to the site. Father Rausch said, “I have come to pray because God’s creation is in jeopardy.” The attenders sang hymns, ritually blew a shofar and symbolically left flowers at the site before peacefully departing.

“This service is a reckoning with what the fracking industry is attempting to do to our state: Turn it into their dumping zone for their toxic waste. Through our prayers we are removing the veil of secrecy from this and forcing our government to confront this as the crisis that it is,” said Sam Rubin, a participant at the service.

Fracking, a controversial process of drilling, produces large amounts of liquid and solid waste that is potentially radioactive and contains a cocktail of toxic, undisclosed chemicals used during the process. Toxic radioactive fracking waste is being sent to underground injection wells, municipal landfills, municipal water treatment plants, spread on roadways and operators have even been caught illegally dumping the waste into streams.

Oil and gas waste is not buried in hazardous waste wells due to federal exemptions for the industry from hazardous waste designation. The waste has been documented by the Ohio Department of Natural Resources and scientific researchers as consisting of highly toxic chemicals, including benzene and arsenic and highly radioactive.

Teresa Mills, Buckeye Forest Council fracking coordinator, told the crowd at the rally that in the last 34 years, the oil and gas industry has injected nearly 8 billion gallons of toxic waste underground in Ohio, with more than half a billion gallons injected in 2012. Waste is expected to dramatically increase in coming years.

During the Don't Frack Ohio 2.0 rally, Teresa Mills of the Buckeye Forest Council reveals to the crowd how many gallons of oil and gas waste have been dumped in Ohio over the last three decades. Photo courtesy of Mimi Morrison, Athens County Fracking Action Network member and Athens business owner.

"The fact that Ohio is a dumping ground for the oil and gas industry is just a symptom of bigger issues with our democracy. This event brought Ohioans together to call attention to our representatives who are acting mainly in the interests of the fracking industry. The most important step to winning back our basic rights to clean air, clean water and effective democracy is to stand together as citizens,” said Vanessa Pesec, a resident of Concord, OH, and president of the Network for Oil and Gas Accountability and Protection, also known as NEOGAP.

“It’s been a magic carpet ride for the fracking industry here in Ohio,” Pesec said.

"We've had earthquakes, water contamination, illegal dumping and truckload after truckload of toxic waste coming from other states," said John Williams from Youngstown, OH. "When will our lawmakers start protecting the health of their citizens, not the profits of oil and gas companies? It’s time for them to ban injection wells." Ohio House Bill 148, introduced last spring by Rep. Denise Driehaus and Rep. Bob Hagan, would do just that.

Over half of the waste injected last year came from out-of-state fracking operations. During a recent comment period, Portage County residents objected to seven new injection wells being proposed for a single property. Despite citizen complaints, last week the ODNR approved eleven new sites for underground injection—eight of them in Portage County. Trumbull County and Morrow County will host the three other newly permitted sites.

“Portage County is a dumping ground. We've got among the highest number of waste injection wells in the state. This industry is clearly profitable. If it is as safe as all the ads say, why won't they allow regular testing of the waste to keep people safe? The reality is that the industry is protected from taking that responsibility,” said Gwen Fischer of Concerned Citizens Ohio.

“These corporations have stolen our water. They’re poisoning it at a rate of millions of gallons per frack. Our government has clearly been bought for it to allow this to happen,” explained Mimi Morrison of Athens County Fracking Action Network. “I went to Warren today to be in the presence of responsible people who have educated themselves and are taking the initiative to educate others and to expose the industry’s lies and make the government responsible for its actions. The energy of this group was really powerful and inspiring.”

Morrison explained that her business, Touch the Earth Adventures, depends on clean air and water and on the beauty of Ohio. “I take people out in kayaks on our state’s most beautiful waterways. At stake for me are both my livelihood and my grandchildren's future.”

“When the production well drilling really gets going, this waste could end up everywhere in Ohio,” said Fischer. "Taxpayers and landowners will be the ones footing the bill to clean it up. If we live in a democracy, the people's concerns need to be taken seriously. Industry reports say that cement fails. We'll be facing serious issues in the years ahead if we don't act now. People are fired up about this issue and I was excited to stand with people from all across the state today."