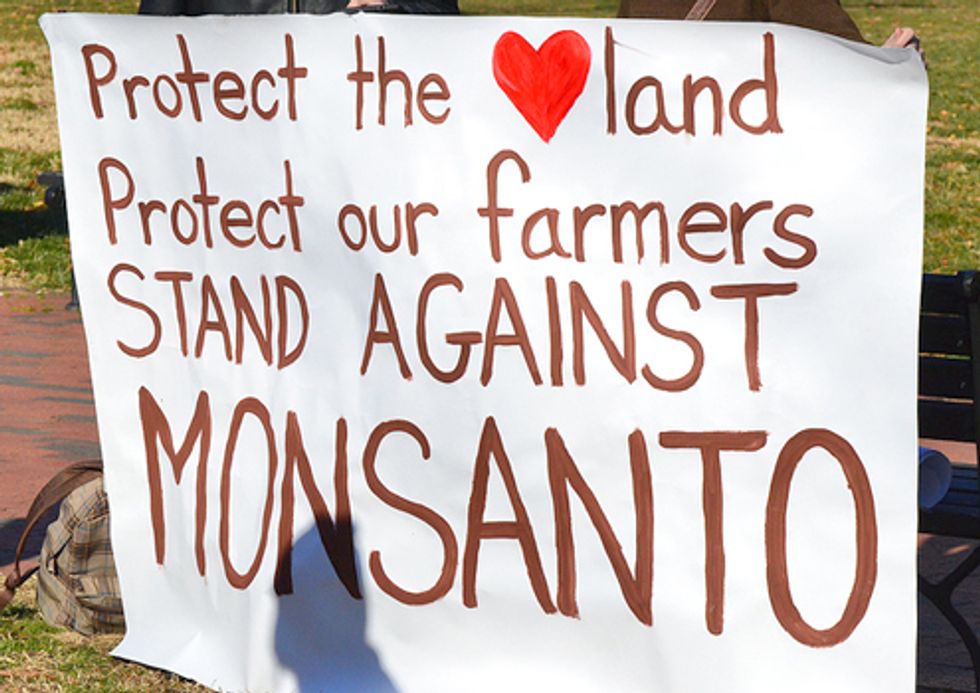 Nearly 300 family farmers, activists and members of Food Democracy Now! gathered in front of the White House today in Lafayette Square, directly after a hearing on the landmark OSGATA v. Monsanto case, to demand that Monsanto end their campaign of intimidation against America’s family farmers over GMO’s and that President Obama halt approval of genetically modified food. The demand for Obama included a halt of approvals, including GMO salmon, until independent long-term safety tests can be conducted.

Thirty-one family farmers, plaintiffs in the landmark lawsuit OSGATA et al v. Monsanto, traveled to Washington, D.C. from across America to attend the U.S. Appeals Court hearing and protest to demand the right to farm without the threat of harassment by the world’s largest biotech seed company. Monsanto has sued or settled in court with more than 844 family farms since 1997 over "patent infringement" after their seeds naturally spread to nearby farms.

“Family farmers need and deserve the right to farm. We have a right to grow good food and good seed for our families and our communities without the threat of trespass and intimidation,” Jim Gerritsen, an organic potato farmer from Maine and representative from OSGATA, the lead plaintiff in the lawsuit, told the enthusiastic crowd. “We need Court protection so that our families will be able to carry on our farming tradition and help keep America strong,” said Gerritsen.

After attending the oral argument to appeal the dismissal of the case at the U.S. Court of Appeals, the farmers marched to Lafayette Park to bring attention to the Obama administration’s pending approval of 13 new biotech crops and AquaBounty’s “Frankenfish,” a genetically engineered “salmon.”

“America’s farmers deserve to be protected from unwanted contamination of their crops and the continued harassment by biotech seed giant Monsanto,” said Dave Murphy, founder and executive director of Food Democracy Now!, a grassroots farmer advocacy group and plaintiff in the case. “At the same time, our current regulatory structure here in the U.S. has failed America’s farmers and consumers. The Obama administration needs to do the right thing to protect our farmers and make sure that new genetically engineered crops go through rigorous safety tests,” said Murphy. “It’s time that President Obama live up to his campaign promise to Iowa farmers in 2007 and label genetically engineered foods. It’s the least that he could do."

Many farmers have been forced to stop growing certain crops to avoid genetic contamination and potential lawsuits from Monsanto. This case challenges the validity of Monsanto's genetically engineered seed patents and seeks court protection for family farmers who, through no fault of their own, may have become contaminated by Monsanto's patented seed and find themselves accused of patent infringement. Their aggressive lawsuits have created an atmosphere of fear in rural America and driven dozens of farmers into bankruptcy.

The hearing today coincided with growing concern from millions of Americans over the pending approval of new genetically engineered crops, which many believe have not been properly tested through serious, independent, long-term safety tests.

Those concerns took on new urgency when only days before Christmas the Obama administration announced it was clearing one of the final regulatory hurdles before the pending approval of AquaBounty’s “Frankenfish.” If approved, it would be the first genetically engineered animal to appear on plates in the U.S.