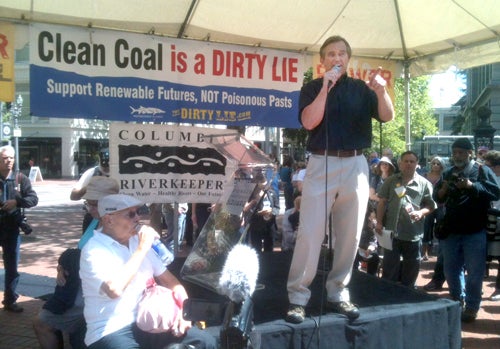 Robert F. Kennedy Jr. gave an impassioned call for a halt to the export of North America’s dirtiest fossil fuel at a rally today in Portland with more than 400 people at Oregon’s largest demonstration opposing exporting coal. Coal companies are targeting the Pacific Northwest with six separate coal export terminals, which would send stunning volumes of U.S. coal from the Powder River Basin in Wyoming and Montana to Asia.

According to Power Past Coal, Oregon and Washington could become the largest coal traffickers in North America with 150 million tons of coal per year through the Pacific Northwest. One proposal would send a dozen dirty coal trains rumbling through Portland neighborhoods each day. The Columbia River Gorge alone faces up to 30 dirty coal trains per day. Proposed coal export terminals include: Boardman, Clatskanie and Coos Bay in Oregon, and Longview, Grays Harbor and Bellingham in Washington, as well as Alaska.

The nation’s eyes are on Oregon and Washington as our region decides between coal trafficking and a clean energy future.

“Oregon and Washington leaders are faced with a choice between healthy communities with a clean energy future or becoming tied to trafficking coal, the most toxic fuel on earth,” stated Robert F. Kennedy, Jr. “Blocking coal export is critically important to the health of our families and our climate.”

“Opening up Oregon and Washington to coal trafficking is insane,” Kennedy stated. “The coal giants would profit while our families suffered. Coal is the dirtiest fuel on earth and our nation is counting on the Pacific Northwest to do the right thing.” 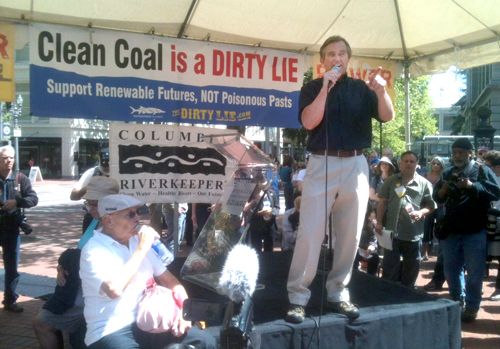 Robert F. Kennedy, Jr. spoke at the largest demonstration opposing exporting coal with more than 400 people in attendence in Portland, OR.

“Last week, PGE objected to Kinder Morgan’s coal export proposal because coal dust could hamper operation of their power plant,” Dr. Harris stated. “PGE thinks coal dust is too dirty for their business, but it is far worse for asthmatics, emphysema patients, children in North Portland and the elderly.”

At the rally, hundreds of activists wore surgical masks bearing slogans such as “Export Clean Air” and “Asthmatics Against Coal.”

Hao Xin, the Qiantang River Waterkeeper in China, spoke about the threat of coal in China. “China should not become the dumping ground for your coal industry. Our people need clean air, not dirty U.S. coal.” Hao’s charismatic speech drove the Oregon crowd to a state of wild-eyed enthusiasm as he conveyed a reasoned, passionate case against the export of American coal to China. Hao proudly talked about the Chinese government’s commitment to renewable technologies and argued that subsidized coal from the U.S. was the greatest impediment to that objective. This vision is shared by many people within the Chinese environmental community, and green business and civic leaders. The Portand coal terminals are yet another subsidy to an antiquated and discredited technology that threatens the future of both of our countries and all of civilization. Hao received a prolonged standing ovation that only ended when he left the square. 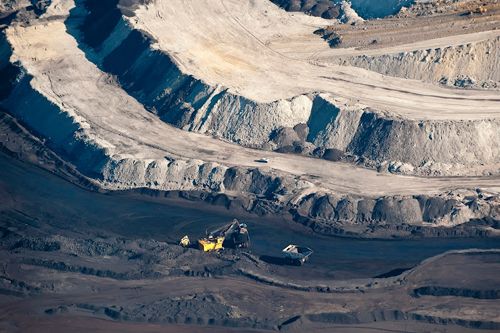 The larget strip mines in the U.S. are located just outside of Gillette, WY. Proposals for up to six new coal ports in Washington and Oregon would export 150 million tons of coal per year from these mines. Photo by Paul K. Anderson, www.paulkanderson.com. 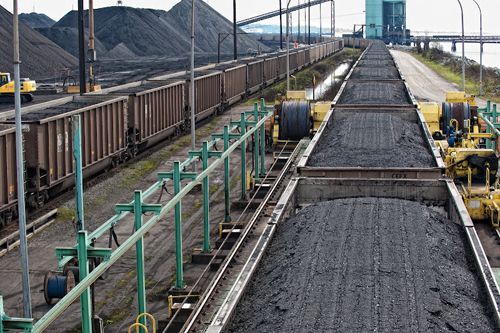 A unit train waits to transfer the coal onto conveyors belts to be loaded on ships headed to Asia or into storage piles at this export terminal in British Columbia. Photo by Paul K. Anderson, www.paulkanderson.com. 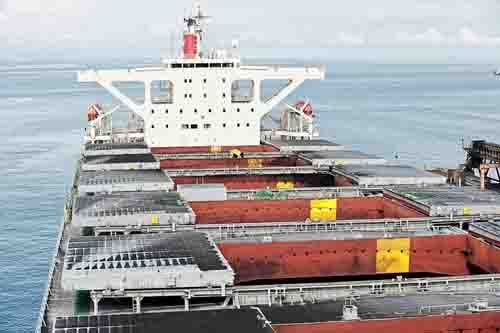 The Cape Violet bulk cargo carrier is being loaded with coal at a terminal in British Columbia headed for Asia. Only 5 percent loaded, the coal dust has already covered the deck. Photo by Paul K. Anderson, www.paulkanderson.com.

POWER PAST COAL: We are a growing coalition of organizations sharing a common interest to prevent the West Coast from becoming a high volume coal corridor. Learn more about coal export at www.powerpastcoal.org

WATERKEEPER ALLIANCE: Founded in 1999 by environmental attorney and activist Robert F. Kennedy, Jr., and several veteran Waterkeeper Organizations, Waterkeeper Alliance is a global movement of on-the-water advocates who patrol and protect more than 100,000 miles of rivers, streams and coastlines in North and South America, Europe, Australia, Asia and Africa.