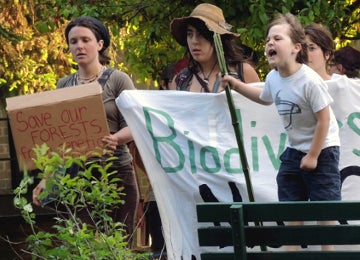 Hundreds of demonstrators marched on an international forest biotechnology industry conference yesterday, demanding a ban on the release of genetically engineered (GE) trees into the environment.

The protest, the largest yet against GE trees, occurred one day after two Asheville residents were arrested while disrupting a presentation, Engineering Trees for the Biorefinery. 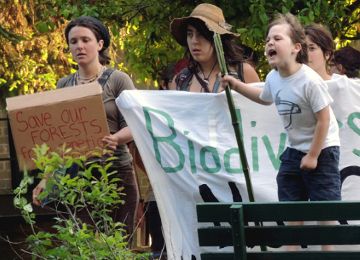 A clear message from the protest: “We are sending a crystal clear message to the GE tree industry and its investors—expect resistance.” Asheville, NC. Photo courtesy of Langelle/

Following the arrests and the threat of protest today, the conference went on high alert. Police maintained a presence inside and outside the hotel conference center all day, participant badges were scrutinized, conference doors were locked during sessions and hotel access restricted.

Two of the major conference sponsors, FuturaGene and ArborGen, are moving forward with plans to commercially release GE eucalyptus trees in Brazil and the U.S.

As protests raged outside, FuturaGene hosted a workshop on the future of forest biotechnology. Debate regarding what to do about public opposition to GE trees dominated the workshop.

Presenters lamented the fact that they were being targeted by protesters and that they could not get the public on board with their research and business plans. One presenter explained the need to get the public passionate about GE trees in order to facilitate legalizing their commercial release. He gave as an example the public passion that changed laws following the Newtown, CT shooting.

“ArborGen is genetically engineering non-native eucalyptus trees to be freeze tolerant to feed ethanol refineries and biomass burners under the umbrella of climate mitigation,” said Anne Petermann, coordinator of the international Campaign to STOP GE Trees, executive director of Global Justice Ecology Project and conference attendee. “They want to convert biodiverse and carbon-rich forests into vast plantations of invasive, flammable and water-draining eucalyptus trees. This will be a disaster for the climate.”

Protesters rallied outside of the conference center for several hours, chanting slogans such as “GE trees–tear ‘em up, ArborGen–shut ‘em down!”

Activists vow that their protests against GE trees are just beginning, and will continue throughout the week of the conference and beyond. Demonstrators echoed one of the arrested protesters from Monday: “We are sending a crystal clear message to the GE tree industry and its investors–expect resistance.”

The Tree Biotechnology 2013 conference, organized by the International Union of Forest Research Organizations, is taking place in Asheville, NC, from May 26 – June 1.