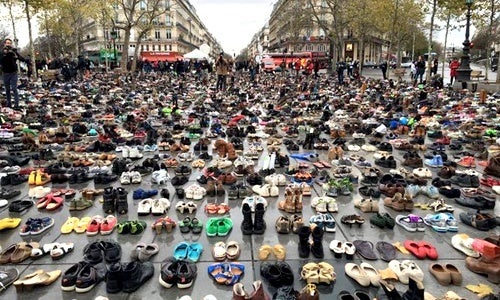 More than 2,300 events spread across 175 countries took place this weekend prior to the Paris climate talks, which begin Monday. Hundreds of thousands of people took to the streets demanding world leaders take urgent action on climate change.

“I can see the humans in humanity again” – THANK YOU to everyone who joined #ClimateMarch https://t.co/6SgYuEeOYd pic.twitter.com/HIx0Wu2r4Z

“The scale and diversity of today’s events are astounding,” said May Boeve, executive director of 350.org. “Worldwide people are ready for the end of fossil fuels and the dawn of renewables. World leaders can no longer ignore this urgent call for action as the climate crisis continues to unfold. It is time for them to stand on the right side of history.”

Some of the highlights from events on Saturday included:

In London, the BBC reported that 10,000 people marched from Hyde Park to Whitehall, the largest demonstration that took place this weekend.

“The issue is really being taken more seriously and the politicians—I think if they see these numbers too—will begin to act definitely and I hope achieve agreement,” Gabriel told the BBC.