Hundreds of Protests in 36 Countries Demand Release of Arctic 30 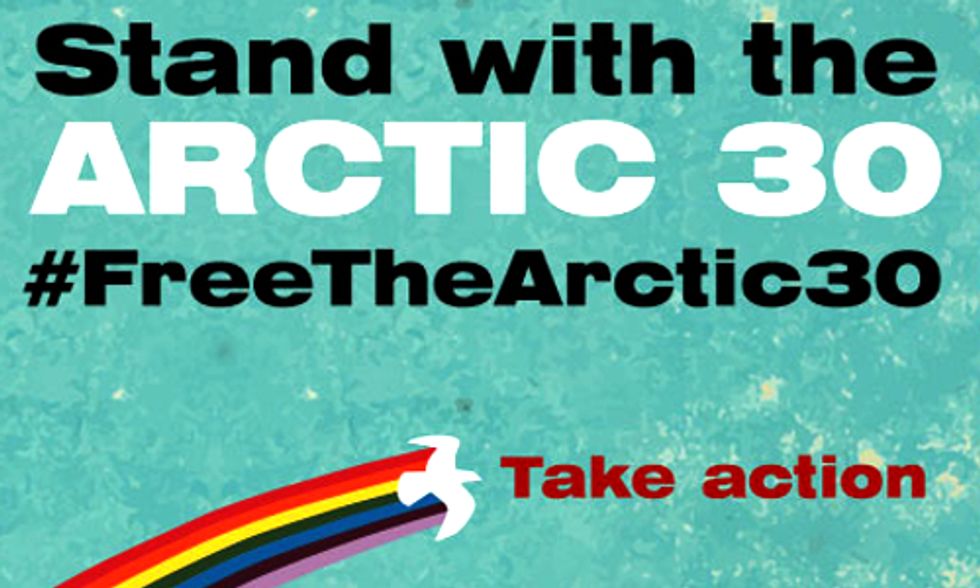 Today, as the Arctic 30 face their 30th day of imprisonment in Russia, nearly 10,000 people are taking to the streets at more than 100 events in 36 countries to call for their immediate release, according to a Greenpeace press release.

Last night, the grounds of the Greenpeace office in Murmansk, Russia, were broken into. CCTV footage, released today by Greenpeace International, shows six men in balaclavas scaling a fence and entering the grounds. A mock cage—which was to be used to highlight the injustice of the Arctic 30's imprisonment during a solidarity protest in the city—was stolen.

As global solidarity activities kicked off, bail hearings began for four more activists: Faiza Oulahsen of the Netherlands, Anne Mie Roer Jensen of Denmark, Alexandre Paul of Canada and Alexandra Harris of the UK. Bail requests for both Paul and Harris were denied; the other cases are ongoing.

"Alex is a caring, sensitive person, who cares for the environmental future of the planet," Harris’ mother said today. "She was on board the Arctic Sunrise as part of a peaceful protest, in international waters, in the radio room doing her job and we hope and pray that the Russian authorities will let our daughter come home to us soon."

In September, 28 activists, a freelance photographer and a freelance videographer, were charged with piracy by the Russian authorities following a peaceful protest against Arctic oil drilling at a Gazprom oil platform in the Pechora Sea. Gazprom plans to start production in the first quarter of 2014, in an area that contains three nature reserves protected by Russian law. If convicted of the charges of piracy, the offense carries a maximum 15 year jail term. The Arctic 30 could be detained until Nov. 24 while  authorities investigate the allegations against them.

This morning, according to Greenpeace, the non-executive Chairman of Shell told media in Finland that the Finnish activist imprisoned in Russia, Sini Saarela, should be released. This is significant because Shell has a close business relationship with Gazprom in the Russian Arctic, “This message should be coming from Shell’s CEO Peter Voser," said Jim Footner of Greenpeace. "He should break his company’s ties with Gazprom and do everything he can to ensure the Arctic 30 are freed."

Yesterday, eleven Nobel Peace Prize laureates have written a letter to Russian President Vladimir Putin offering their support to the Arctic 30. They write in their letter:

Arctic oil drilling is a dangerous, high-risk enterprise. An oil spill under these icy waters would have a catastrophic impact on one of the most pristine, unique and beautiful landscapes on Earth. The impact of a spill on communities living in the Arctic, and on already vulnerable animal species, would be devastating and long lasting. The risks of such an accident are ever present, and the oil industry’s response plans remain wholly inadequate. Equally important is the contribution of Arctic oil drilling to climate change. Climate change in the Arctic and elsewhere threatens all of us, but it is the world’s most vulnerable who are paying the price for developed countries’ failure to act.

The Nobel Peace Prize laureates who sent the letter are:

In a letter to a journalist, published today in the Dutch newspaper Volkskrant, Oulahsen writes of being held “in a dirty cell, alone, isolated from the rest,” only able to “catch a glimpse of other Russian prisoners in the corridor.”

“Once in a while a rat crawls across the floor," she said. "I’ve lost weight and am not sleeping too well, but I am still holding my head high.”

She complains of having been denied the right to call home and not receiving most of the books and letters people are sending her. “I crave letters from my family, friends and colleagues,” Oulahsen continued. She also says the highlight of her day is the exercise hour, when she “walks around in a dark concrete space of about five by five meters, where you’re lucky if you can see the sky through the cracks in the rotten and leaky roof.”

“It is now 30 days since our ship was seized and our 30 friends and colleagues were detained," Greenpeace International Executive Director Kumi Naidoo said. "They now face a charge of piracy—an absurd charge that carries a maximum 15 year jail sentence."

“The Arctic 30 were standing up for all of us, defending a fragile environment and a climate in crisis and now we must stand with them. Their detention is an attack against every single person who has ever been willing to raise their voice to demand a better future for themselves and their children. Now these 30 people are prisoners of conscience and we are all responsible for their fate."

“Greenpeace does not think it is above the law, but those 30 brave men and women are not pirates and this charge is a clear attempt to deter peaceful protest," Naidoo continued. "We are here today to show our solidarity with the Arctic 30 and defend the right to peaceful protest. We call for their immediate release.”