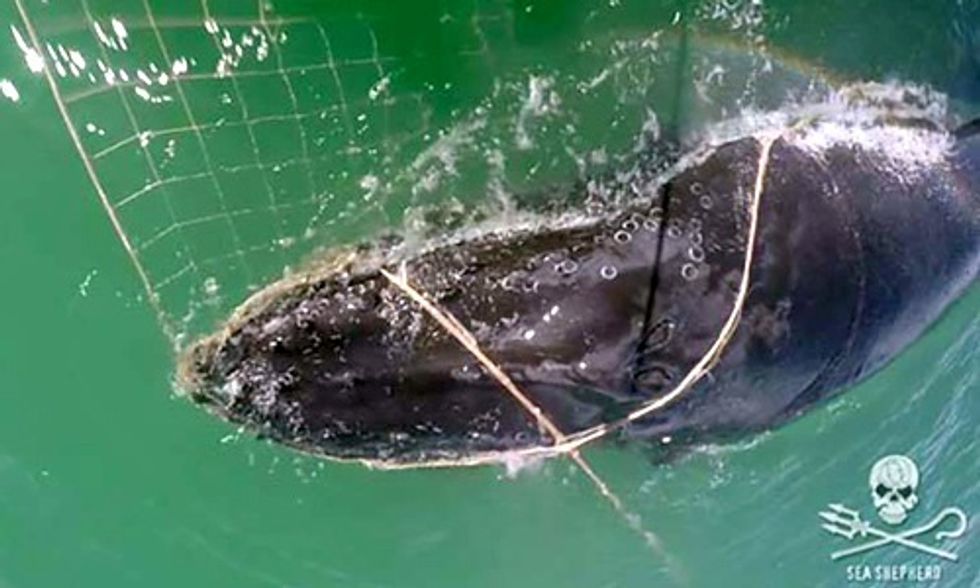 The crew of Sea Shepherd's research vessel R/V Martin Sheen spotted last week a humpback whale entangled in a gillnet in the Vaquita Refuge in the Gulf of California in Baja California, Mexico. While Captain Oona Layolle, campaign leader and captain of the M/V Farley Mowat, notified the Mexican Navy and the Federal Attorney for Environmental Protection (PROFEPA), the crew began the rescue operation. The whale was estimated to be 35 feet long and crews from both vessels worked to free the whale by cutting the gillnet off the whale's head and torso.

This is not the first humpback whale entangled in an illegal gillnet found by Sea Shepherd crew. On Christmas Eve, the crew of the R/V Martin Sheen spotted a humpback whale weighed down by a gillnet. Upon further investigation, the crew determined that the humpback whale was a calf and was already dead. Sea Shepherd then sought permission from the Mexican government to be able to begin removing gillnets. Permission was granted on Dec. 31, 2015.

Sea Shepherd's newest vessel, the M/V Farley Mowat, a retired U.S. Coast Guard interceptor ship, joined the R/V Martin Sheen, in January 2016. On its first day of Operation Milagro, the crew of the M/V Farley Mowat spotted an illegal gillnet and spent six hours removing it. The Mexican Navy were notified and seized the illegal gillnet. Since then, the crews of both vessels have developed net retrieval devices to trail behind the R/V Martin Sheen and the M/V Farley Mowat's speedboat the Wolf. The use of these devices has already resulted in removal of seven gillnets and three longlines in just the past few weeks. Three totoaba, seven rays, one whale and dozens of juvenile sharks have been saved by the recent removals of illegal fishing equipment. This total does not taken into account the countless animals who will not become trapped and die in the illegal gillnets and illegal fishing lines.

The crew of the M/V Farley Mowat was recently joined by Survivorman Les Stroud. Upon assisting in freeing the whale, he commented, “This is true conservation in action. Today, we were able to save the whale and remove another illegal gillnet. It is an honor to be a crew member with Sea Shepherd Conservation Society. Cutting that net and freeing the whale was a life changing experience."

In April 2015, President Enrique Peña Nieto announced a two year ban on the use of gillnets in the Gulf of California. The intent was to protect the vaquita porpoise, the world's most endangered marine mammal. Vaquita are the unintended victims of gillnets used to catch the totoaba bass, another endangered species. The totoaba are targeted for their swim bladders for sale on the black markets in Asian. Vaquita are native only to the northernmost part of the Gulf of California.