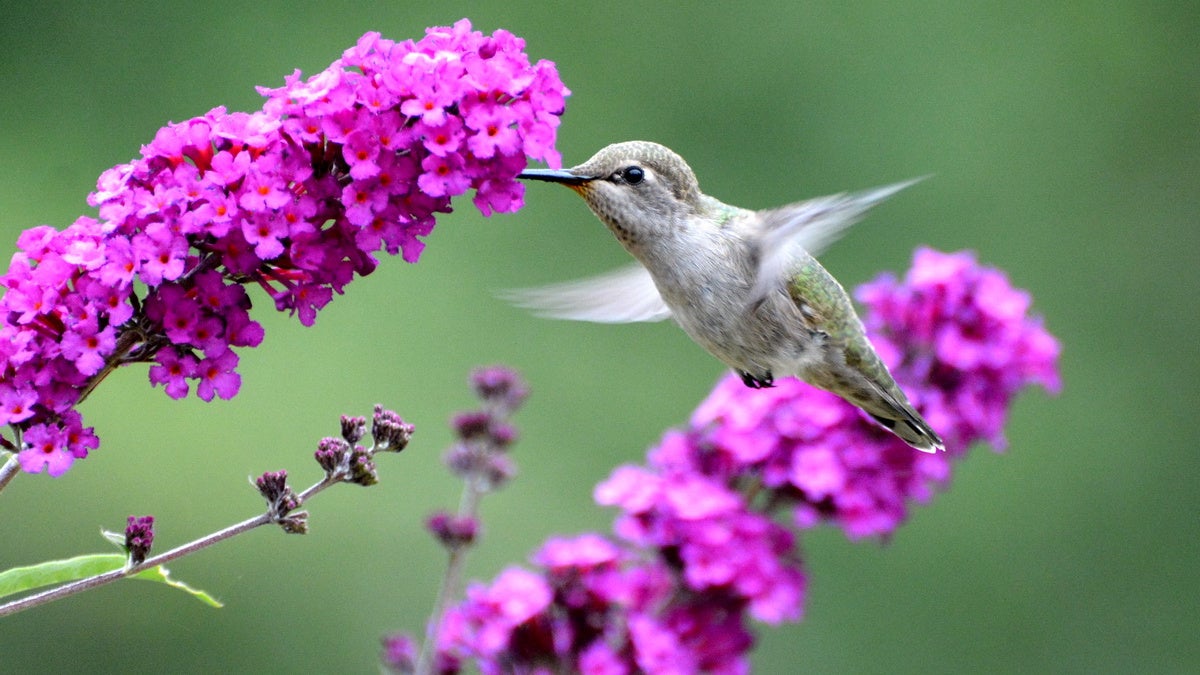 A hummingbird feeds on a butterfly bush in Washington state on Aug. 18, 2017. Jim Culp / Flickr

Hummingbirds live a more colorful existence than humans do, a new study published in the Proceedings of the National Academy of Sciences Monday confirmed.

While humans only have three color cones, birds have four, meaning they can theoretically see colors on the ultraviolet spectrum, National Geographic explained. Until now, however, no scientist had really tried to discover what a bird’s eye view of color would look like.

“Humans are color-blind compared to birds and many other animals,” lead study author and Princeton University assistant professor Mary Caswell Stoddard said in a Princeton press release. “Not only does having a fourth color cone type extend the range of bird-visible colors into the UV, it potentially allows birds to perceive combination colors like ultraviolet+green and ultraviolet+red — but this has been hard to test.”

To overcome these difficulties, Stoddard and a team of scientists from Princeton, the University of British Columbia (UBC), Harvard University, University of Maryland and the Rocky Mountain Biological Laboratory (RMBL) set up a series of outdoor experiments with broad-tailed hummingbirds in Colorado. They wanted to test the birds’ abilities to see nonspectral colors, colors perceived from widely distinct parts of the color spectrum.

The only nonspectral color humans can see is purple, which is not part of the rainbow.

“Instead of being formed by a single light or mixture of similar lights, purple is formed by simultaneously stimulating our non-adjacent red-sensitive and blue-sensitive cones in our eyes,” study coauthor and UBC Ph.D. student Harold Eyster explained on Twitter.

To test whether the birds really did see these colors, researchers placed feeders containing sugar and plain water in an alpine meadow next to LED tubes designed to emit a variety of colors, including nonspectral ones, the press release explained. The researchers conducted 19 experiments over three years, recording data from more than 6,000 feeder visits. They found that the birds could learn to visit the sugar water feeder even when the two LED tubes marking the feeders were indistinguishable to human eyes.

The details of color vision are usually studied in the lab, but we wanted to know how birds act in the wild. Thus, we set up two feeding stations, 1 with nectar & 1 with water. We then associated a color with each feeder. We periodically swapped the locations of the feeders. 8/n pic.twitter.com/6dVeID1icQ

“Seeing them do this right in front of my eyes is one of the most exciting things I’ve ever witnessed,” Stoddard told National Geographic.

The hummingbirds could see purple, ultraviolet+green, ultraviolet+red and ultraviolet+yellow, the researchers confirmed, according to the press release.

University of Chicago evolutionary biologist Trevor Price, who was not involved with the research, told National Geographic that the findings marked a “big step forward” for understanding how birds and other animals see.

“We’re really only beginning to scratch the surface in our understanding of color vision in animals,” he said.

The scientists think the birds use their enhanced color vision to locate a wide variety of plants for nectar. They found that the birds would be able to distinguish nonspectral colors in 30 percent of birds’ plumage and 35 percent of plants from a database.

Birds can see nonspectral colors, and these colors make up a substantial part of the bird visual environment. We hope that this informs the assumptions that future researchers make about what birds see, and that it will inspire more studies on nonspectral color vision. 15/n

“The colors that we see in the fields of wildflowers at our study site, the wildflower capital of Colorado, are stunning to us, but just imagine what those flowers look like to birds with that extra sensory dimension,” co-author David Inouye of the University of Maryland and RMBL said in the press release.

The findings also have conservation implications.

“We are now studying how hummingbirds use color to find flowers and impress mates — and how these behaviors might be impacted by climate change,” Stoddard told CNN.