'Human Swan' Joins 4,500-Mile Migration to Help Save the Species 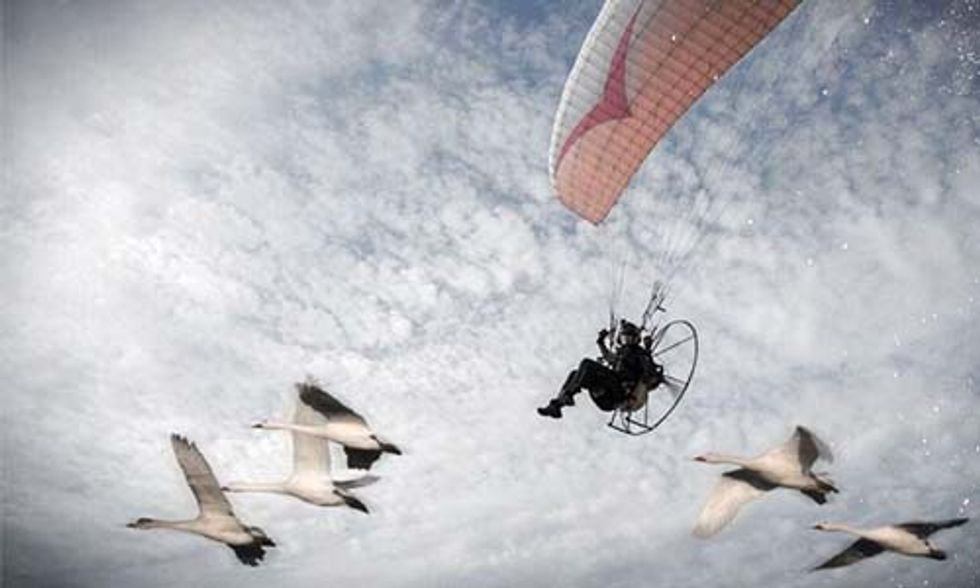 While bird lovers are getting ready to celebrate World Migratory Bird Day next week, a team of researchers is preparing for an epic expedition that will follow Europe’s smallest swans as they migrate from Russia to the UK.

Only they’ll be getting their information from a lone woman who will be following the swans closely from the air. Sacha Dench of the Wildfowl & Wetlands Trust (WWT) is going to be undertaking the first attempt to fly along with them using only a paramotor.

She’ll be taking off with the swans from the Russian high Arctic in the fall and traveling approximately 4,500 miles across 11 countries, ending at their overwintering grounds in the UK. If she makes it the whole way, she’ll be the first woman to cross the English Channel via paramotor.

While it sounds like a grand adventure full of challenges, there’s an important reason this mission is being undertaken. The Bewick’s swans who Dench will be accompanying are endangered and their numbers have dropped dramatically over the past 20 years. Now researchers from the University of Exeter, who are part of the expedition team, are trying to learn more about exactly why so few are surviving.

According to the research team, between 1995 and 2010 the number of swans making this migration has fallen by more than a third from 29,000 to just 18,000. Some of the threats they’re now facing include a loss of wetland habitat, development, energy exploration, being hunted and climate change.

Researchers hope that by following them so closely throughout their migration and getting a literal bird’s-eye-view of their journey along the entire route, they will be able to see firsthand what’s happening to them along the way and why so many don’t make it. They will then be able to use their findings to improve conservation efforts along the flyway.

While the expedition will provide valuable insight, it’s also a unique way to get people interested in conservation and the protection of wildlife. So far it’s attracted support from some big names, including Dame Judi Dench and Sir David Attenborough.

“I’m humbled by the support that Flight of the Swans has already gained. People all across Europe and Russia are using this expedition as a lever to improve things for the swans, which is all I could have hoped for,” said Sacha Dench.

“Each winter, I’m fortunate enough that a small flock of a couple of hundred Bewick’s swans returns to my workplace—WWT’s Slimbridge Wetland Centre in Gloucestershire, UK. To get there they need safe passage all the way from the northernmost wilds of Russia and for the last two decades fewer and fewer have made it. It’s crucial that we act now before it’s too late,” she added.

For more info on the expedition and ways to help, check out Flight of the Swans.