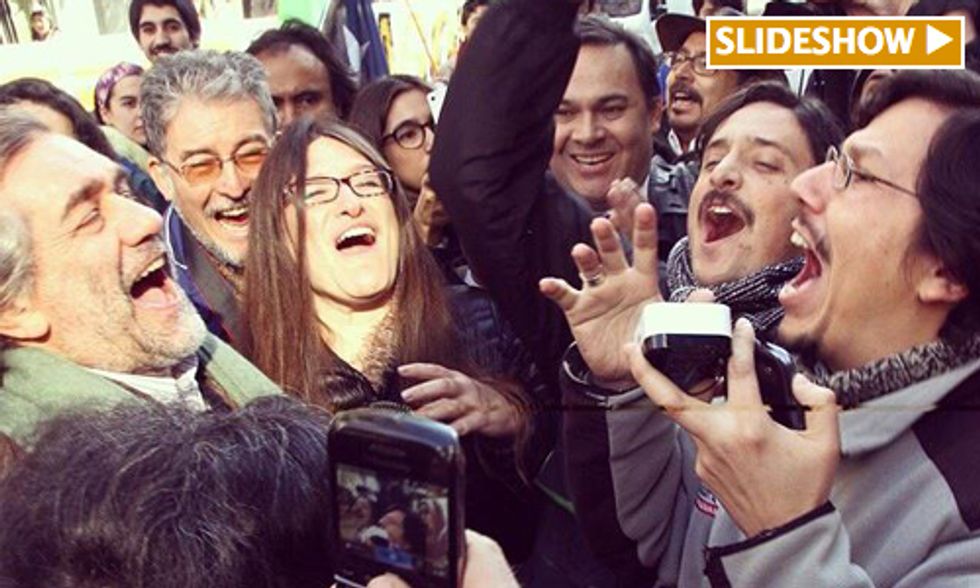 We are witnessing history in the making in Patagonia. After more than eight years of civil protests, public awareness campaigns and legal challenges—brought by a collective of more than 80 non-governmental organizations who together form the Patagonian Defense Council—Chile's government has revoked the environmental permit for the $8 billion HidroAysén project. The decision means two of Patagonia's most pristine rivers will (for the time being) remain wild and scenic.

The decision also aids us in preventing even more dams—and more mines—in other watersheds, including Endesa's plan to build three dams on the Futaleufú. What started as a small grassroots coalition facing unthinkable odds has evolved into a force to be reckoned with, both in Chile and internationally.

For many members of the Patagonian Defense Council, this week's decision served to validate a decade-long effort to hold foreign companies accountable for their environmental impacts. Speaking from his home in Santiago, council member Bernardo Reyes, with the organization Ética en los Bosques, underscored the historical significance of the decision. “The death of HidroAysén marks the end of the era of mega-dams in Chile ... Today our citizens are demanding changes to the energy model and to an economic model that preys upon local territories, ecosystems, cultures and economies."

Chileans do not want dams that sacrifice their national treasures, and they're making that very clear. In Futaleufú, 90 percent of the population is opposed to the dams. These communities want to determine their future. They also want energy independence, and not just from fossil fuels but from the massive corporations like Endesa and Energía Austral that control the market. Contrary to the claims these corporations are making in the Chilean press, their only objective in damming Patagonia's rivers is to profit by selling energy to the mining sector.

International supporters of the Patagonian Defense Council include Robert F. Kennedy, Jr., president of Waterkeeper Alliance, who spoke about the HidroAysén and Futaleufú projects in an interview with Patagon Journal last year. He said, “Endesa has tremendous political power and, as foreign investors, they are trying to drive energy policy in Chile. And it is an insane policy. It makes no sense from a market point of view, and makes no sense in terms of protecting the patrimony of the country and the economy of Patagonia which is increasingly a tourist-based economy." Studies show Chile can meet all of its energy needs without damming a single river in Patagonia, but only recently has the political will caught up with the science.

From our perspective as Waterkeepers the fight to save Patagonia is far from over. Mining companies still want access to Patagonia's rich mineral resources, which means they still need large energy suppliers. Endesa still owns the water rights to many of the largest rivers in Chile. And even with tougher environmental controls that increase the costs of gaining environmental approval, destroying Patagonia's rivers is still the cheapest way for mining companies to get what they want. Until we get permanent protections in place, Endesa can continue developing plans to dam the Puelo, Cuervo and Futaleufú Rivers.

Amidst growing concerns about the destruction of Patagonia, 45 women from different regions of Chile and Argentina came together in January for a five-day cabalgata to call attention to the damming of Patagonia's rivers.

Now is the time for us to act. We know the corporations backing these projects will continue to seek investors. And they will most certainly continue lying to the Chilean people about the purpose of hydro generation in Patagonia. Damming the rivers will not help Chile develop or become energy independent. Wind, solar and small-scale renewables have been and still are the correct answer if Chile wants to reverse decades of inaction and truly become independent. These dams are about putting more money into the pockets of Endesa and the mining sector, plain and simple. And the Chilean people know this now, and they are fighting. And in this instance they have won.

Community-based watershed groups like ours need to keep the momentum going. Now that HidroAysén has been scrapped, the dams on the Futaleufú would be the biggest energy project in Patagonia if we don't stop them.

We've come a long way since May 2011, when almost 100,000 of us turned out on the streets to protest the initial granting of the HidroAysén permit. Now that President Bachelet administration has revoked that permit, we can finally start focusing on crafting the solutions that will make Chile energy independent and free of dams.

Want to thank President Bachelet? Our friends at Natural Resources Defense Council have set up an easy way to send a letter online by clicking here.

Patrick J. Lynch is International Director of the Futaleufú Riverkeeper, the first Waterkeeper organization in Patagonia and a member of the Patagonian Defense Council.