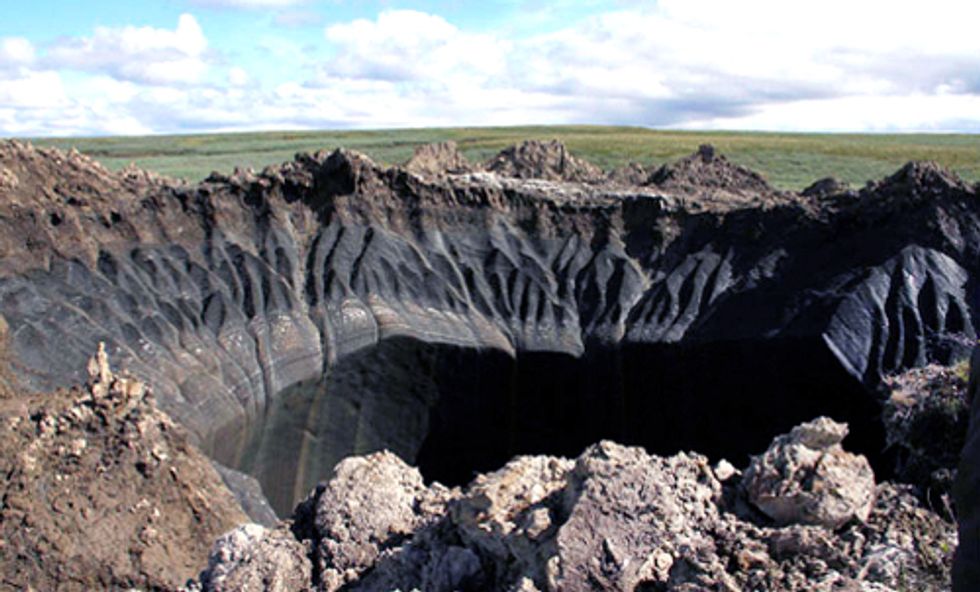 The large methane-filled blowholes that were discovered in Siberia last summer seem to be more numerous than originally thought, with four giant new craters, along with clusters of smaller ones, found in the permafrost in northern Russia. The new holes were discovered in the same general vicinity as the original three, on the Yamal Peninsula.

This map shows the locations of some of the craters scientists are discovering in Siberia. Image credit: Vasily Bogoyavlensky

"We know now of seven craters in the Arctic area," professor Vasily Bogoyavlensky of the Moscow-based Oil and Gas Research Institutes and the Russian Academy of Sciences told the Siberian Times. "Five are directly on the Yamal peninsula, one in Yamal Autonomous district, and one is on the north of the Krasnoyarsk region, near the Taimyr peninsula. We have exact locations for only four of them. The other three were spotted by reindeer herders. But I am sure that there are more craters on Yamal, we just need to search for them. I would compare this with mushrooms: when you find one mushroom, be sure there are few more around. I suppose there could be 20 to 30 craters more."

The cause of the blowholes is not entirely clear, although probable explanations have been coming into focus as Russian scientists have continued to study them. The most prominent theory is that exceptionally warm temperatures caused by climate change have released methane stored in the permafrost, causing a sort of explosion that creates the craters.

Bogoyavlensky says two of the craters have turned into lakes, as examination of satellite images has allowed scientists to learn more about them, their location and how numerous they are. It complements the exploration inside the craters undertaken late last year. Bogoyavlensky has urged further exploration but has warned about the risks involved, saying that leaking methane could cause new explosions at any time.

"We know that there can occur a series of gas emissions over an extended period of time, but we do not know exactly when they might happen," he said. "For example, you all remember the magnificent shots of the Yamal crater in winter, made during the latest expedition in November 2014. But do you know that Vladimir Pushkarev, director of the Russian Centre of Arctic Exploration, was the first man in the world who went down the crater of gas emission? More than this, it was very risky, because no one could guarantee there would not be new emissions."

Extraordinary Photos From Inside the Siberian Methane Blowhole