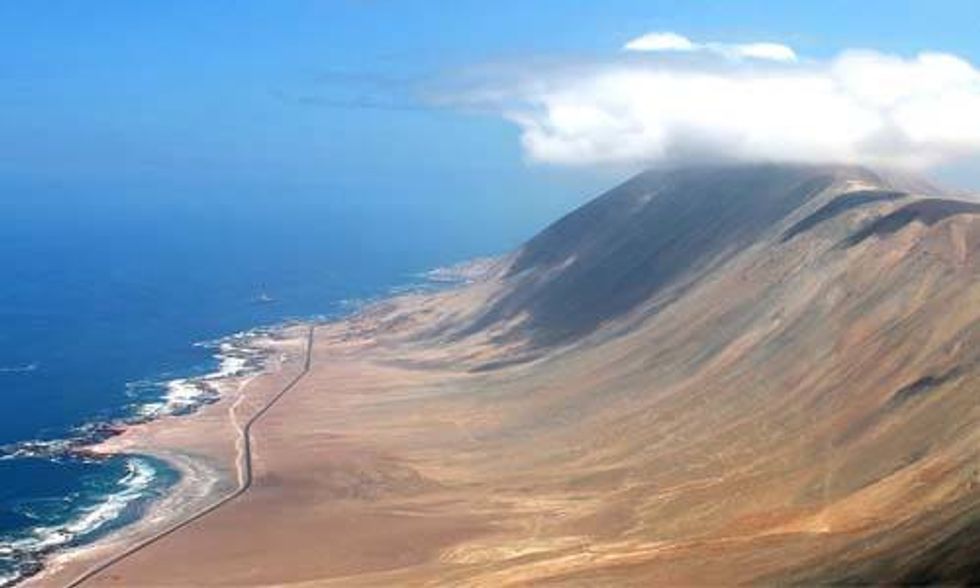 Lodged between the Andes Mountains and the Pacific Ocean is the Atacama Desert in Chile—the driest non-polar desert in the world.

It certainly isn't a location where you'd expect to find a hydropower plant, but Valhalla, a Chilean company, plans to build Espejo de Tarapaca (Tarapaca Mirror), a 300-megawatt solar and hydropower plant.

During the day, the plant will use solar power to move seawater up a tunnel to the top of a mountain, where the water will be stored in a natural reservoir, explained FastCoExist. At night, the water will be released back down, generating power as it falls. This way, the plant can generate power day and night. Pumped storage hydropower plants are not a new concept, but utilizing solar power to pump the water is.

"You need to be able to provide power when it's needed, so it's readily available and dispatchable," Francisco Torrealba, co-founder of Valhalla, told FastCoExist. "If on a particular day you don't have wind and can't provide energy at a peak time, that would be a huge crisis. That's why our concept becomes relevant."

The water will be pumped up to a natural reservoir at the top of a mountain using solar power during the day. Then at night, the water will be released back down, generating power as it falls. Photo credit: Valhalla

The company won't have to construct dams, either. "We found these natural depressions that we believe were very ancient lakes, but obviously there is nothing there now, it is a desert, that will allow us to store water," the company's co-founder and chief executive Juan Andres Camus told Reuters.

And it's currently cost-competitive with coal. "In Chile, we don't have any subsidies for renewables, so we need to be able to compete straight with coal generation," Torrealba explained. "It's a very Darwinian world—you need to be able to play against coal. Our cost structure is at the price of coal right now."

Valhalla is set to begin construction on the plant in the second half of 2016. They're still in the process of securing funding for the venture, but they estimate they will be supplying electricity to utilities by 2020. They believe the Chilean coastline has the potential to supply power for all of South America.

"The region of Tarapaca can be a leader in solar energy," Torrealba told Tunneling Journal. "And Chile can become an energy superpower in the world."

"We could completely replace all the generation in South America," he told FastCoExist. "You could very easily envision a South America in 20-25 years which has an integrated grid all throughout the continent, in which Chile could be providing very cheap, clean electricity with this combination of pump storage and solar power."