Huge Barriers Remain in Rapid Shift to Renewables, But Solution Is at Hand 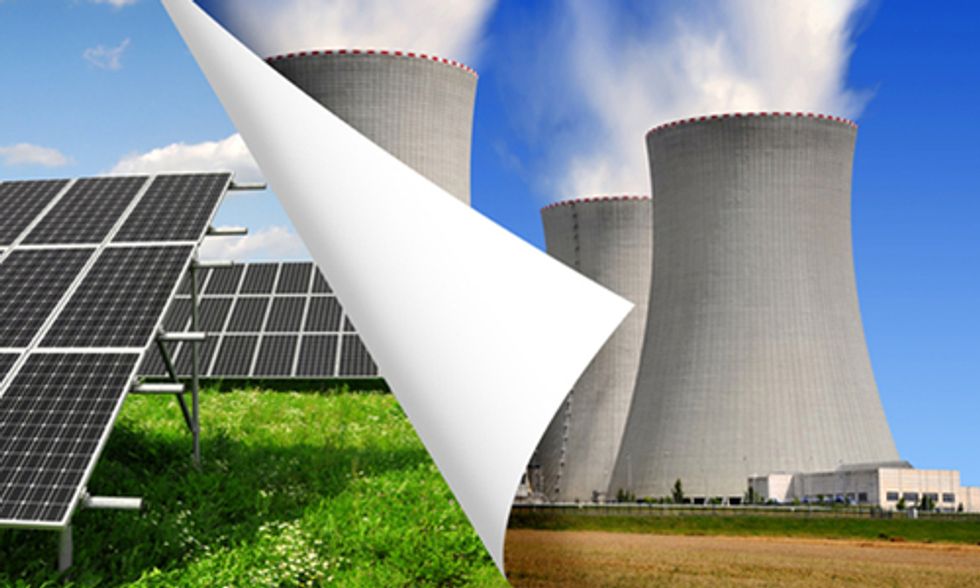 This article is the third of a three-part series on the Future of Electricity. Read Part I and Part II.

A few weeks ago I posted two of a promised three part series on the remaking of the electricity sector of the U.S. economy. Those posts outlined the flimsiness of the arguments being made against clean electricity by coal companies and incumbent utilities, and the overwhelming economics driving the revolution from the renewables side.

What’s really needed to accelerate the gain of a fast clean electricity transition, and minimize the pain is a mechanism to capture a portion of the profits of innovation and use them to compensate communities and families left behind.
Photo credit: Shutterstock

And since those postings the gales of change have steadily risen in ferocity. The government now estimates that wind alone could provide 35 percent of U.S. electricity by 2050; a major traditional utility, TXU, has now partnered with Solar City to offer Texas customers lower utility bills if they lease solar on their rooftops. Solar City in turn announced it will now offer cities, college campuses and remote communities its own renewable micro-grids, becoming the world’s first distributed utility. New reports show that 60 percent of the new electricity generation capacity added last year in the U.S. was renewable. And New York State has launched an almost revolutionary new approach to the public utility business model.

Any rapid economic change means losers as well as winners—capital assets stranded before their investors planned, or workers, families and communities whose economies rested on a technology now outraced by something newer and better. Those with the most to lose from a rapid shift to renewable electricity have enormous power to obstruct, slow down or sabotage change.

It is not accidental that the charge against the U.S. Environmental Protection Agency’s Clean Power Rule is led by Senate Majority leader Mitch McConnell, representing Kentucky, one of the nation’s most coal dependent economies. But while the political opposition to clean energy comes heavily from coal companies and utilities, they are not the most important barrier. The coal companies, for one thing, no longer enjoy much market power. The entire market valuation of the U.S. coal sector is only $12 billion, less than half that of Tesla alone—down 78 percent in 4 years. Most U.S. coal reserves are not even owned by coal companies, but by the federal government, which could just stop giving them away at subsidized rates.

Most of the coal plants were fully amortized years ago—their investors have already recovered the capital. These plants were due for retirement this decade anyway—the utilities planned to replace them with a wave of new coal generation, plans which collapsed from 2005-2010 when the economic lunacy of coal investments became clear.

But there is another set of stakeholders, who have both the power to slow a clean electricity transition and a powerful moral claim to be compensated for losses which have not been amortized or written down by the market.

These are workers and communities—in the coal fields, yes—but also wherever coal fired power plants were primary employers and tax base for communities, particularly in and around the Ohio Valley. Valuable social and community assets could be stranded by an unplanned rapid electricity transformation—which would be both foolish and unjust.

Begin with the workers who extract and then covert coal into electricity. In previous transitions, (California’s North Coast shift from redwood logging), critical safety nets were put in place for such workers. We need a similar plan for the transition away from coal. Ending the unfair federal give-away of western, strip-mined coal, which undercuts employment intense Appalachian deep-mined coal, would make the problem much, much easier. It would also, as the Center for American Progress has pointed out, provide important additional revenues to finance the clean power transition).

As many utility workers as feasible should be shifted to the cleaner power plants which will replace old coal. The reclamation of ravaged, strip mined coal fields can and should be a major employment opportunity for today’s  miners and their children—we need to use the funds paid into the Surface Mining Reclamation Act by coal consumers to reclaim abandoned mine sites. But not all workers will find such landing pads. We need effective development strategies for their communities to create new livelihoods and diversify their economies.

As power plants aged and mining mechanized, the average age of workers rose—shrinking employers don’t hire the young. In most countries, this would not be a problem. The work force would shrink naturally, through retirement. But in the US, uniquely, pensions are tied to individual employers, or industries who were permitted to massively underfund them. So like autos and steel before it, coal finds itself with a huge cohort of older workers who earned their pensions—but may not get them, because the companies did not set aside sufficient funds and now don’t have big enough profits. Indeed, Peabody and Arch Coal have already managed to dump their pension and health care obligations on the retirees and taxpayers by exploiting loopholes in federal bankruptcy law. Existing pension guarantee mechanisms are far too flimsy to handle the potential collapse of the pension plans for miners and utility workers—such an event could spiral through the rest of the economy in a very corrosive way.

The communities where jobs may become scarce and retired workers no longer adequately covered for pensions and health care are, of course, the very communities where tax revenues will shrink most dramatically as coal mines and power plants close. So if each community and its workers are left to fend for themselves, the price of a transition to clean power will be far, far higher than it needs to be —and the resistance to change will be turbo-charged by legitimate fear.

This is avoidable. The transition from outmoded, dirty power to advanced, clean energy is highly lucrative—innovative technologies will make a lot of money and create millions of new jobs. Winners should compensate vulnerable losers—just capture a fraction of these new profits and we can protect the security and welfare of otherwise stranded workers and communities, provide investment capital for economic diversification and ensure the full value of pension funds.

The Obama Administration has suggested a down-payment on such a vision in its 2016 budget, calling for “dedicated new resources for economic diversification, job creation, job training and other employment services for workers and communities impacted by layoffs at coal mines and coal-fired plants.” This proposal has strong support from organized labor, and the Center for American Progress has proposed to fund these kinds of programs by cutting back on the give-away of Western public coal to private mining companies, much of it for export.

But like most ideas that are headed towards Capitol Hill, modesty has trumped boldness. The Administration is asking for only a $55 million down-payment, and the CAP proposal would still leave private coal companies getting unfair deals on initial bids for public coal—though even these first steps are unlikely to get through this Congress.

What’s really needed to accelerate the gain of a fast clean electricity transition, and minimize the pain is a mechanism to capture a portion of the profits of innovation and use them to compensate communities and families left behind. One idea is a “system improvement fee,” perhaps a half cents a kilowatt hour, levied on all electricity generated in the U.S. for five years. Such a fee would capture about $20 billion a year. Three quarters could be devoted to modernizing the grid and improving infrastructure for all customers, and the remaining quarter used to create a safety net for workers, communities and pensioners at risk, as well as to clean up the legacy of strip mining, coal ash dumping and environmental devastation left behind by coal.  The customer savings from the grid improvement alone would easily outstrip the total cost, enhance national competitiveness, clean the environment and protect the climate.

But that would require a political system that believed in the American dream.