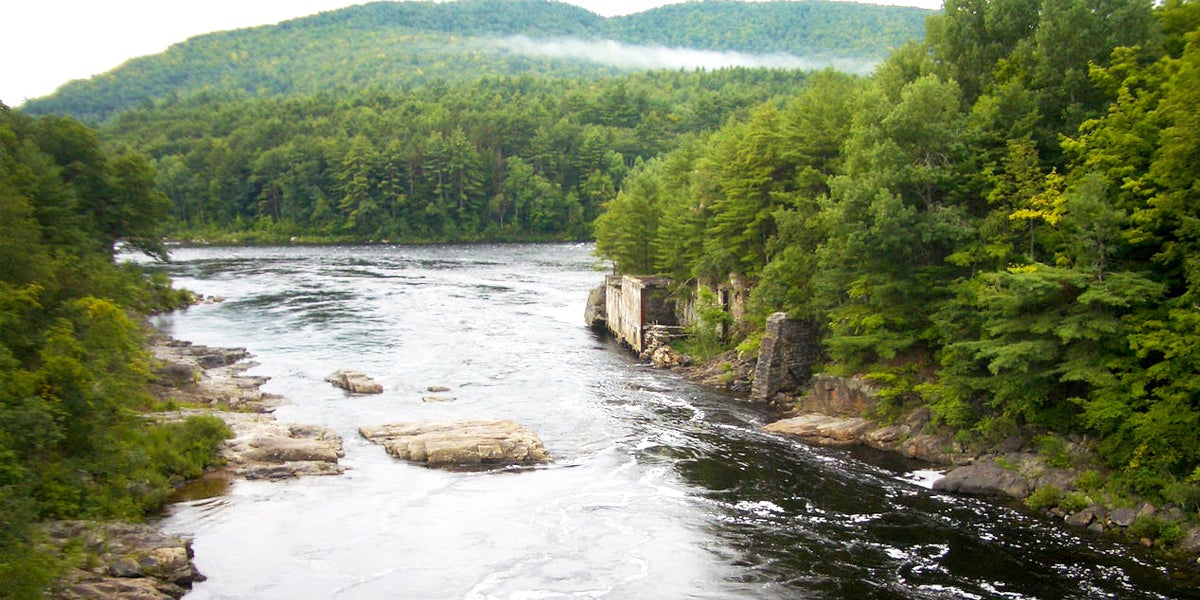 Last fall, a whale made a go of Manhattan. The humpback, eventually named Gotham, chased schools of herring from New York Bay into the Hudson River, as delighted onlookers snapped photos of its tail flukes framed by the city skyline. For a couple of weeks, the whale rose to social media stardom; it even started tweeting.

Wildlife experts say both the whale and its abundant prey testify to the improving water quality of the Hudson, which is a federally designated American Heritage River as well as one of the largest Superfund sites in the U.S. The river has come a long way since General Electric and other companies dumped toxic waste into its channel, but new threats may be on the horizon. The U.S. Coast Guard is considering a proposal to allow the construction of 10 anchorage grounds for massive oil barges (currently there are two). If approved, an influx of tankers up to 600 feet long would be able to dock in riverside communities between the George Washington Bridge and the Port of Albany. 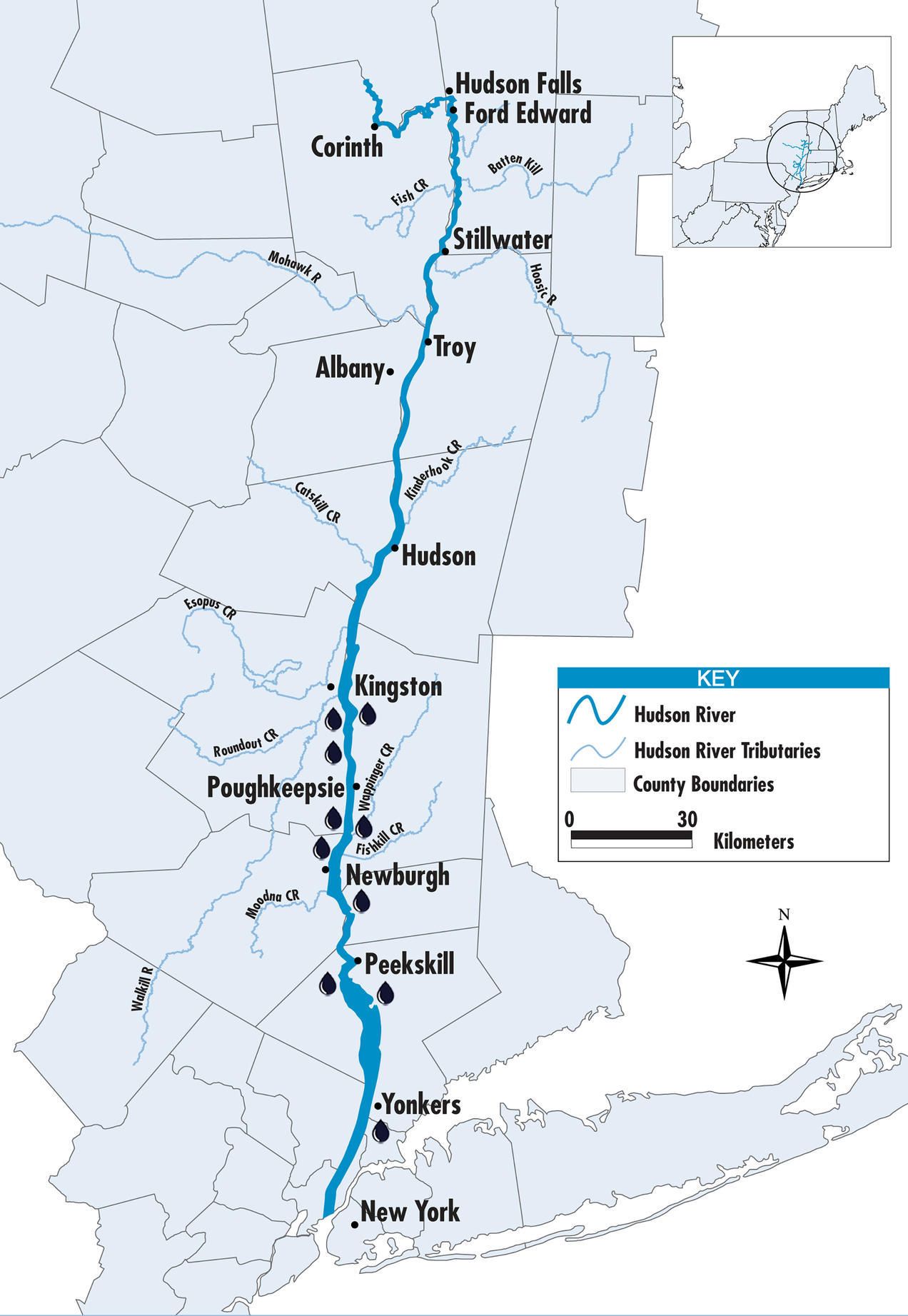 Fossil fuel companies hope to take advantage of a recently lifted ban on crude oil exports by making the river a conduit to ports overseas. Meanwhile, environmental advocates fear the recovering river—a resource for wildlife, recreation and drinking water—will once again be steeped in industry.

The anchorage proposal submitted last year by the Maritime Association of the Port of New York/New Jersey, which represents oil and shipping interests, threatens to transform more than 2,400 acres of the waterway. In the south, the 43 new berths would extend down to Yonkers—a city in the midst of revitalizing its blighted industrial waterfront. On the northern end, the barges would dock in Kingston, which fronts one of the river’s only public swimming beaches. All but one of the berths would allow for long-term anchorage, which would essentially convert the Hudson into a parking garage for crude oil.

During the comment period that ended in December, more than 10,000 people voiced their objections. Some opponents, like Mark Chertok, an environmental lawyer who represents the Hudson River Waterfront Alliance, pointed to the industry’s practice of stockpiling oil on barges—as it does in the Gulf of Mexico—until higher market prices make it advantageous to unload its cargo. “This use of the river for arbitrage purposes would be an abuse of federal navigational authority,” wrote Chertok. The project, he said, would enable “an invaluable public resource to be converted into free warehousing for private commercial benefit.”

Sending more crude down the Hudson would also make old problems even worse, because much of the cargo may not be just any oil, but tar sands oil. Once stripped out of Canada’s boreal forest, this volatile fossil fuel is transported by pipeline or train, then refined in a highly carbon-intensive process. Global Partners LP has applied for a permit to add new equipment to its storage facility at the Hudson port of Albany for the processing of tar sands oil. The company’s refinery sits right beside the Ezra Prentice Homes, a low-income housing development. 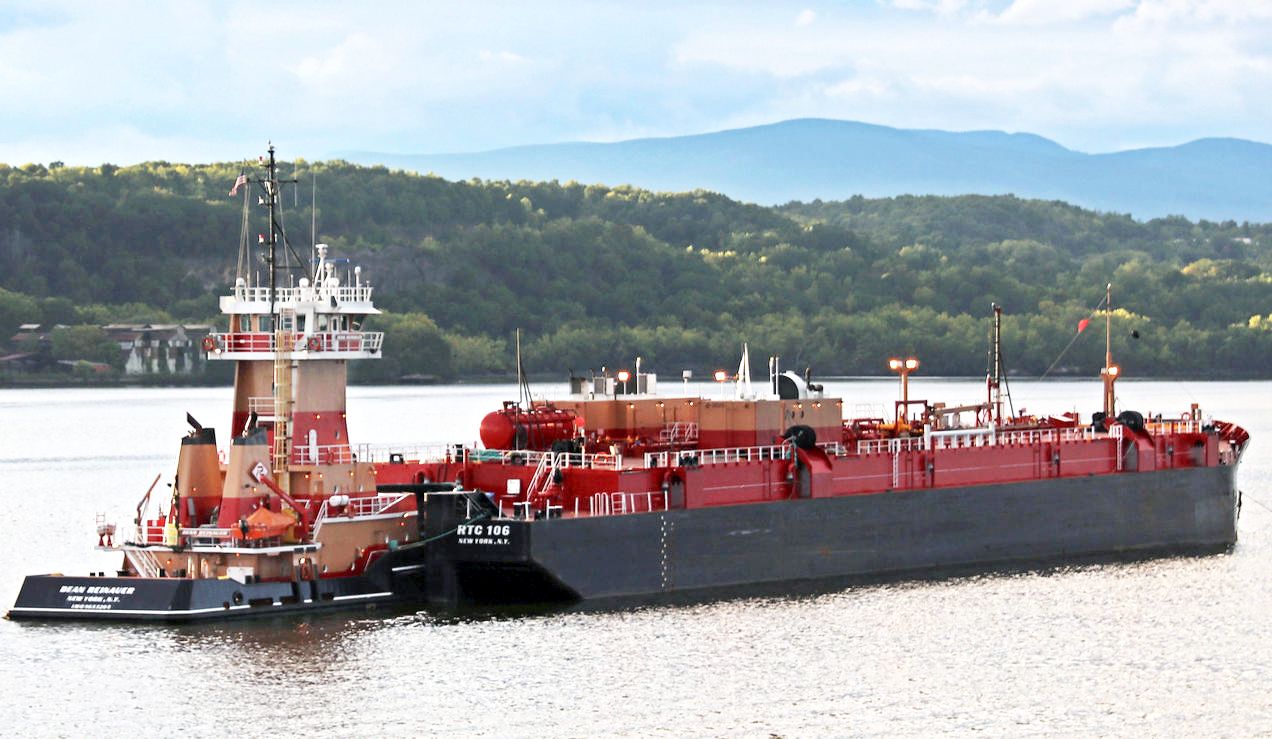 “It’s a classic example of a polluting facility being sited directly adjacent to a low-income community of color,” said Rob Friedman, a campaigner on the Natural Resources Defense Council’s (NRDC) environmental justice team. “Public housing is often built on the cheapest land in a community and here you have people breathing in toxic fumes every single day, next to a facility that has already been shown to be violating the Clean Air Act.”

NRDC is currently suing Global Partners and challenging its permit as part of a clean air case represented by Earthjustice. The lawsuit asks the court to force Global to apply for a new air pollution permit and prohibit the Albany facility from handling Bakken crude oil.

“It’s amazing to have communities up and down the river in a state of resistance saying we’re not going to stand for this,” Friedman said. Beyond worries about how the barges will affect the look and feel of the river, it’s the prospect of an oil spill that has many local citizens taking action.

Communities have ample right to be concerned. When a crude oil barge collided with a towboat on the Mississippi River in February 2014, responders were able to recover only a tiny fraction of the spilled fuel—just 95 of about 30,000 gallons. And tar sands crude is particularly disastrous for river ecosystems, explained NRDC staff attorney Kimberly Ong. “This oil immediately sinks to the bottom and there is, to date, no known way of effectively cleaning it up.” (Just ask the residents of Kalamazoo, Michigan). 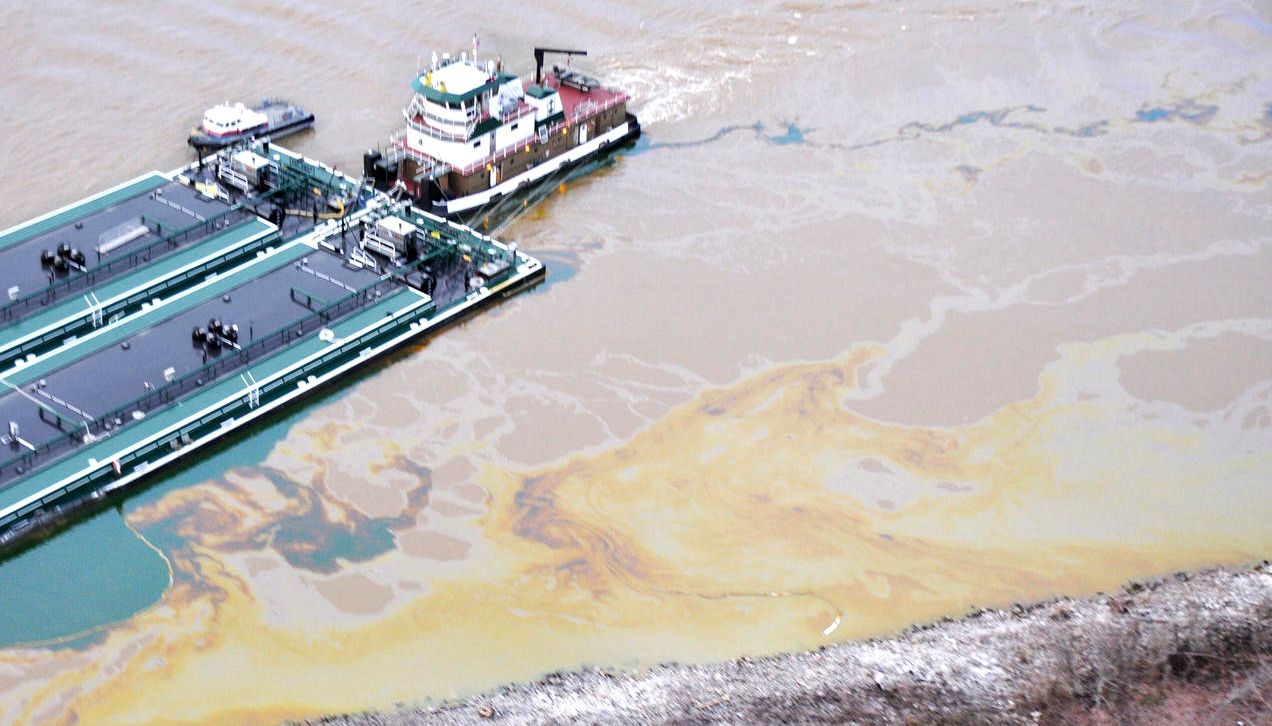 “The Hudson is extremely turbid, so it’s silty and there are a lot of suspended sediments in the water,” added Friedman, who once worked on the river conducting water sampling tests for Riverkeeper. “If there were to be a spill of crude oil in the river, it’s likely that a very small percentage would be recovered based on its turbidity and the fact that the Hudson is a tidal estuary,” he said. “It’s changing directions constantly.”

In September, Riverkeeper’s boat captain, John Lipscomb, gave a town hall presentation in Rhinebeck, New York. He discussed the deadly “bomb train” derailment in the Quebec town of Lac-Mégantic in 2013. In addition to killing 47 people, the accident sent 26,000 gallons of crude into the Chaudière River. In the year that followed the spill, government-commissioned biologists found unprecedented levels (up to 47 percent) of deformities in many of the river’s fish species. Lipscomb, who has spent the past 17 years on the Hudson conducting pollution patrols and scientific studies, fears that lessons from the Chaudière are going ignored.

“Here we have endangered species that we’ve prioritized for recovery in the Hudson,” Lipscomb said, referring to species like Atlantic sturgeon and bog turtles. “And we’re running a product that if spilled can’t be collected and has proven to cause problems for wildlife in the river.” These incidents are also a toxic threat to the surrounding communities, he pointed out—and not just to the people who fish on the river. “The 40 percent of it that flashes off into fumes, if it happens in your community, is mutagenic and carcinogenic.” (While few studies have examined the long-term impacts of oil spills on human health, many Gulf Coast residents were still suffering from respiratory and cardiovascular problems, memory loss and other degenerative issues five years after BP’s Deepwater Horizon spill).

In light of New York’s clean energy priorities, plus those 10,000 public comments and the pressure from organizations like NRDC, Riverkeeper and Earthjustice, Friedman remains hopeful that the new anchorages will be scrapped. 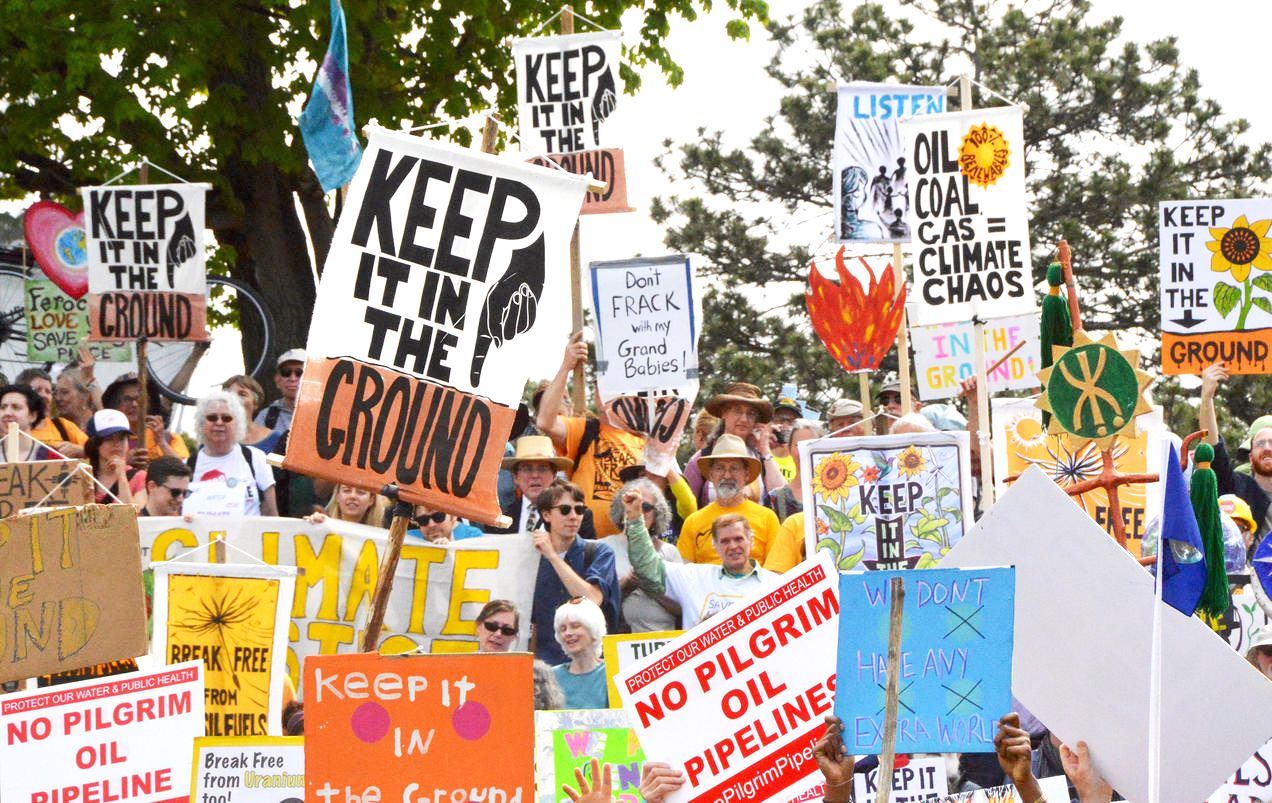 Hudson Valley residents will need to keep this pressure up to protect the waterway in their backyards, but this is not just a local fight. By blocking the expansion of the tar sands industry, they’re going to bat for all of us—from Alberta’s First Nations, whose lands have been poisoned by the open-pit mining of this toxic fuel, to upstate New York residents breathing fumes from refineries next door, to the countries trying to curb carbon emissions instead of unleash them and finally, to the odd whale that chases its dinner up a welcoming river.

Jenny Shalant is a senior editor for the Natural Resources Defense Council.