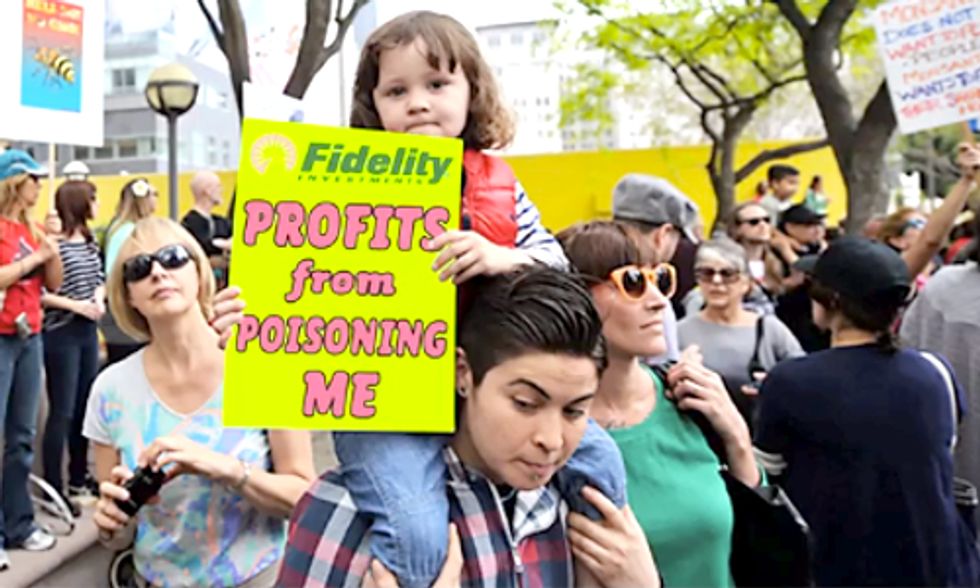 Monsanto didn't achieve $11.8 billion in sales and 404 facilities in 66 countries all on its own.

The company is valued at $60 billion in the marketplace with 525 million shares outstanding, but the three largest mutual fund shareholders, Vanguard, Fidelity and State Street, own nearly 16 percent of Monsanto stock. By comparison, the seed giant's CEO Hugh Grant owns less than 1 percent.

This all means there's a solid chance that the toxic law manipulator may be nestled somewhere in your mutual fund or 401(k) plan. Those findings are part of a six-month investigation by Food Democracy Now! that results in the launch of a global divestment campaign against Monsanto.

Whether it's by contacting a financial advisor to dump Monsanto investments or strategically opting into funds that aren't linked to Monsanto or other chemical or biotech companies, the organization is encouraging people around the world to divest.

“Monsanto is a ruthless corporation that operates beyond the ethical boundaries of what is acceptable for a healthy democratic society, said Dave Murphy, founder and Executive Director of Food Democracy Now!, said in a statement. “For decades its executives lied about the harm of its toxic chemicals, intimidated scientists and bullied farmers to put profits over human health and public safety.

"It's time to broaden socially responsible investing to confront the significant harms that Monsanto has caused."

The organization likens Monsanto to tobacco corporations like Philip Morris and RJR Reynolds that most never knowingly invest in.

Food Democracy bills its campaign as a way for people to stop unknowingly profiting from such activities and stop "financing them as they poison the planet, contaminate our food supply and corrupt our democracy." Here's an excerpt from the letter to executives at Fidelity, Vanguard and Street State that the organization is asking people to sign:

"As the manufacturers of Agent Orange, DDT, and PCBs, Monsanto's corporate executives intentionally ignored the warning of their own scientists for decades regarding the harmful and even deadly effects these products had on their workers, communities where the chemicals were manufactured and even America's veterans ...

Remove Monsanto's stock from any open-ended fund under your management.

I urge you to take this important step for people and the planet.

It's time to take a stand for future generations."