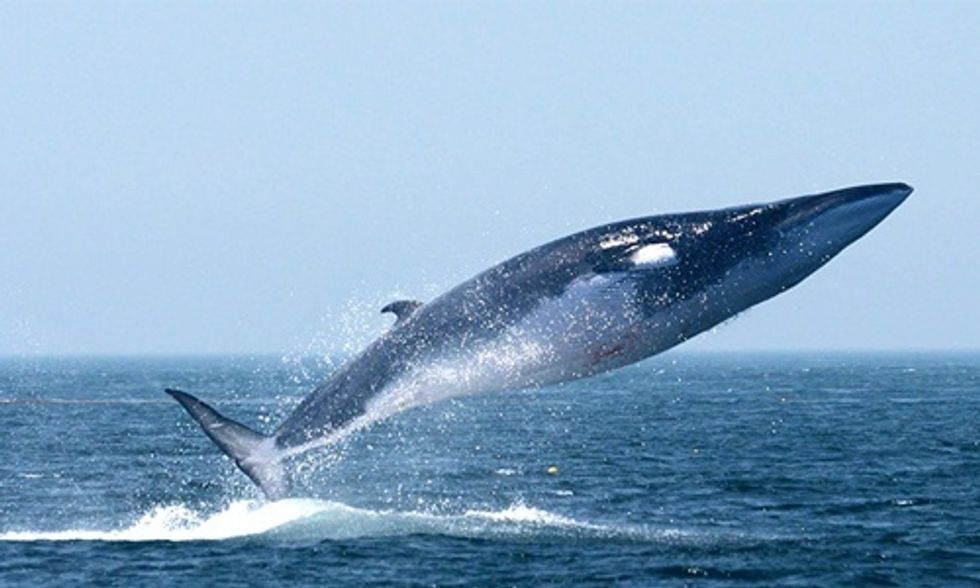 Attention seafood lovers: if you buy (or eat) fish sourced from one of Iceland's leading seafood companies, you are unwittingly funding whaling.

As part of the Don't Buy From Icelandic Whalers coalition, Natural Resources Defense Council and other groups brought this message to Boston earlier this month, urging seafood companies at the Seafood Expo North America not to do business with the giant Icelandic seafood company HB Grandi or its subsidiaries—companies linked to and controlled by Icelandic whaling interests.

Fin whales, known as the "greyhounds of the sea" for their sleekness and speed, are the world's second largest animal and are listed as an endangered species. Photo credit: Danielle Dion

HB Grandi—Iceland's largest seafood company—plays a very active role in Iceland's whaling industry. Not only does it provide its facilities for the processing of endangered fin whale meat for the export market (i.e., to Japan), but it is also controlled by the whaling and investment company Hvalur hf. Last year, Hvalur killed 155 endangered fin whales, the highest number since the moratorium on commercial whaling took effect. Hvalur is responsible for the deaths of more than 700 endangered fin whales since 2006.

Fin whales, known as the "greyhounds of the sea" for their sleekness and speed, are the world's second largest animal and are listed as an endangered species.

Hvalur announced earlier this month that it would not hunt fin whales this summer, citing issues with exports to Japan, its main market. While Hvalur's planned suspension of its summer fin whale hunt is great news for the whales, whaling has been suspended in Iceland in the past (after the tsunami), only to later resume.

Endangered fin whales will receive a temporary reprieve from Iceland's harpoons this summer, but the coalition continues to urge companies to use their buying power to ensure Iceland stops killing whales permanently.

In addition to outreach at the Boston Seafood Expo, we wrote to major U.S. wholesalers and retailers that source Icelandic seafood, urging them to audit their supply chains in order to reassure the public that they are not buying fish from companies linked to whaling. Most recently, the popular retail chain Wegmans and seafood supplier Iceland Seafood International provided written statements confirming they do not source from companies linked to Icelandic whaling. High Liner Foods, Ahold USA and Trader Joe's have also pledged their opposition to commercial whaling and confirmed they do not source seafood from HB Grandi.

But many other companies have not responded to our request.

The coalition website, www.DontBuyFromIcelandicWhalers.com, identifies which North American businesses purchase seafood from companies linked to Hvalur and provides information for consumers about how to take action against Icelandic whaling.

Click here for more information and to take action.