How You Can Help Prevent an Arctic Nightmare 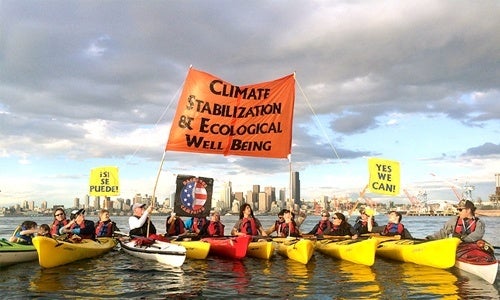 I had a terrible nightmare: President Mitt Romney approved Shell Oil’s drilling plans for the Chukchi Sea off the coast of Alaska. He did it even though his own Department of the Interior calculated that the odds of a large oil spill were 75 percent. He did it even though no proven method exists to respond to such a spill. He did it even though indigenous Alaskan culture has centered on traditional harvests of marine resources for thousands of years. He did it even though all known, extractable Arctic oil and gas reserves must remain undeveloped if the world wants to avoid the worst effects of climate disruption. He did it even though such a spill would affect fish, birds from around the globe and marine mammals such as polar bears, walruses, seals, and bowhead and beluga whales. He did it in spite of Shell’s abysmal track record in the Arctic, which could inspire the next Dumb and Dumber sequel. 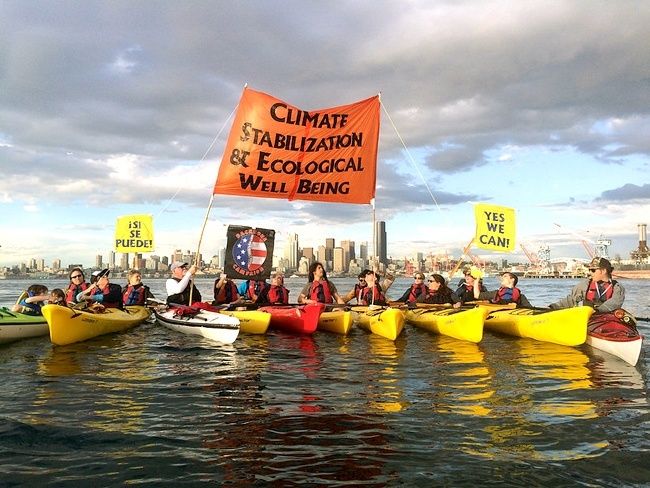 This weekend activists organized by Sierra Club and others are planning a “sHell No Flotilla” in Seattle to protest Shell’s plans to drill in the Arctic this summer. Photo credit: Backbone Campaign

When I woke up and realized that Romney had lost the election, I was momentarily relieved. But then the nightmare started all over again. Because everything else really did happen—only it was President Barack Obama, the man we worked so hard to put in the White House, whose Interior Department decided it would be OK to spill oil in the Arctic.

How are we supposed to make sense of this?

Is it because Obama is worried about his next election? There isn’t one. Is it because he’s beholden to the petroleum industry? They never supported him. Is it because he thinks the U.S., as the new chair of the Arctic Council, should lead by some kind of perverse counterexample? Here’s what Secretary of State John Kerry said at the council’s annual meeting last month: “The Arctic Council can do more on climate change … we all know the clock is ticking, and we actually don’t have a lot of time to waste.” OK, so let’s release millions more tons of greenhouse gases and melt the Arctic even faster.

If this is U.S. climate leadership, then I’d hate to see what climate irresponsibility looks like.

Why is it so hard for so many of our leaders to recognize what Martin Luther King, Jr., once called “the fierce urgency of now?” We really don’t have time to waste, yet our government keeps promoting drilling, fracking and mining as if the laws of nature could be suspended at our convenience.

As for America’s Arctic, President Obama, Secretary Kerry and Interior Secretary Sally Jewell will have long since left office when, as predicted by their own experts, disaster strikes on the dark, stormy waters of the Chukchi. The nearest Coast Guard station is more than 1,000 miles away. As strong currents and winds spread oil to the most sensitive marine areas and coastlines, all anyone will be able to do is watch and wish we had not been so reckless.

But it’s still not too late to change the odds. The chances of a major spill are three-in-four, but only if Shell is allowed to go through with its crazy plans. Already, the idea that our government would take such an appalling risk is inspiring outraged citizens to rise up and say “no way!”

Even before the Obama administration’s approval of Shell’s drilling plans, “kayaktivists” in the Pacific Northwest were planning to protest the oil company’s plans to lease a terminal in the Port of Seattle for its drilling fleet. This Saturday they’ll stage a “sHell No Flotilla” and an accompanying rally on dry land. There will also be a solar and wind-powered, crowd-funded “People’s Platform” marine barge—with the message “Next Time Try Solar.”

According to Seattle mayor Ed Murray, who supports denying Shell a permit to use his city’s port, “We need to focus our port, our businesses, on the new economy, on things like clean energy of the future and not on the old economy that is dying out, such as oil.” Exactly. But the resistance in Seattle needs to be just the beginning, because we cannot let this stand.

If Shell does end up drilling in the Arctic, much of the responsibility will rest with President Obama and his administration. But if we don’t shout it from the rooftops (or our kayaks) that this is a terrible mistake, if we don’t make the case that fossil fuels can and must stay in the ground—that tomorrow is today—then some of the blame must rest with us, too.

I’m not too worried about that, though. You can bet the Sierra Club won’t give up this fight, nor will the millions of other people who want our leaders to match rhetoric with reality. When our leaders let us down, we have two choices: complain or raise hell. Which will it be?  It’s our obligation to do both.

If you’re within driving distance of Seattle this weekend, come join the rally—by land or by sea. And if you want to take a stand against climate disruption and Arctic exploitation, and believe that clean energy would do a better job, throw in a few dollars for our friends in Seattle working to stop Shell before it starts.